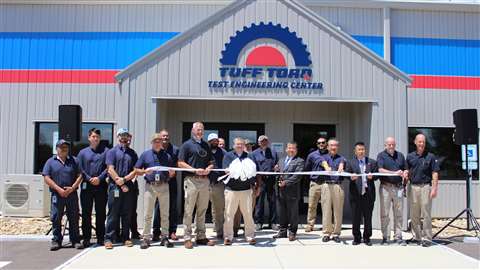 Tuff Torq staff and management are shown during the opening of the Tuff Torq Test Engineering Center in Tennessee. (Photo: Tuff Torq)

Tuff Torq was established in 1989 and the Test Department formed in 1995. Beginning with only three employees and three pieces of equipment, the department has expanded significantly in the past 27 years, and now boasts over 30 employees, 15 test stands, two test tracks, and multiple other pieces of equipment. The new dedicated testing facility is expected to further enhance Tuff Torq’s testing capabilities towards improving quality and reliability and increasing customer value.

A ceremony was held to commemorate the opening of the facility, and was attended by Tuff Torq management and employees, and representatives of the local community.

“Tuff Torq’s sales and product portfolio have grown to the point where more testing and new types of testing are needed,” said Yoshimune Yamaoka, chairman of Tuff Torq Corp. “It is thanks to your continued efforts that Tuff Torq has succeeded and faces a secure future.” 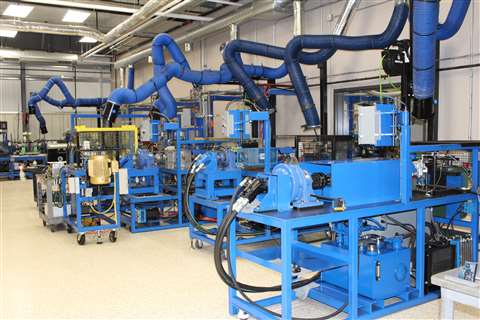 Yamaoka also praised the strong support from the local city and government as contributing to Tuff Torq’s success.

Keith Andrews, one of the original test department members, was on hand to join in the opening of the center. “With this new state of the art facility, Tuff Torq will continue to produce and develop new industry leading products with world-class leading performance, quality, and reliability.”

One feature of the new building is its Yanmar energy system. The system allows for lower operating costs and helps to achieve the goal of reducing the carbon footprint and providing sustainable solutions to customers.

Tuff Torq was founded as a subsidiary of Kanzaki Kokyukoki Corp., which is part of the Yanmar group.

T-TEC was designed to be easily expandable and will support Tuff Torq’s continued growth.