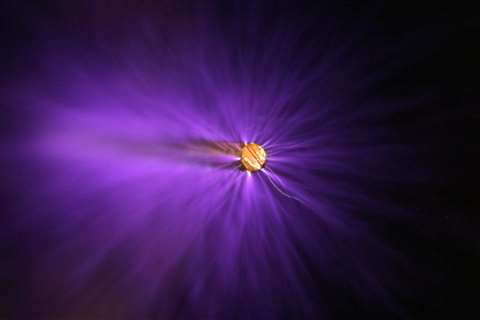 According to TPS, its Transient Plasma Ignition System can improve engine efficiency by up to 20%, reducing NOx emissions, and is compatible with several different fuel types. (Image: Transient Plasma Systems)

For those born before the 2000s, your first recognized exposure to plasma technology may have been in the form of the once-heralded plasma flatscreen TV. Yet, plasma is far more common than you might think (take a spark from your stove top, for example), and the applications far more varied and long-lasting than those early visual “marvels” that disappeared a little over a decade after launch.

Founded in 2009, TPS is a spin-off from the University of Southern California, which has conducted research on “transient plasma” for decades. Unlike conventional plasma typically generated via superheated matter, low-temperature transient plasma is produced by high-voltage, ultra-short (nanosecond) electrical pulses that control the ionization process to the point it prevents overheating. In this “transient” state, the plasma enables superior benefits for such applications as combustion and emissions control.

TPS was formed with the express purpose of translating this transient plasma technology into marketable products and systems. Advances in solid-state, high-voltage switching opened up even more opportunities, enabling the company to develop high-power solutions in a more compact package.

“All of a sudden, this technology that had been researched for so long as potentially valuable to reducing emissions became viable,” said Dan Singleton, TPS co-founder and CEO.

Shown are Nanosecond Pulsed Power operating modes. TPS believes the technology can be applied across a variety of applications. (Chart: Transient Plasma Systems)

An infusion of venture investment funding in 2019 enabled TPS to make the final push to develop its products. With both solutions shown to improve emissions and efficiency on many engine platforms, TPS is now “locking up partners to go to market with.”

Zapping emissions at the tailpipe

The TPS aftertreatment system combines a plasma power module, a reactor and an electrode that essentially “zap” particulates and NOx emissions before they exit the tailpipe.

“Imagine looking at the back of a vehicle or a generator with a straight exhaust pipe. We would put a wire down the middle of the pipe, apply high-voltage nanosecond pulses to it and produce plasma in the exhaust,” Singleton explained. “What we understand it does to the particulate is convert much of it back into gaseous carbon. In terms of NOx, it breaks it apart into basically nitrogen and oxygen.”

According to the company, the process can cut NOx by up to 80% and diesel particulates by up to 85%, all while reducing aftertreatment complexity. “The overall commercial advantage is a simpler system,” Singleton said. “Right now, you need two systems: you need SCR (selective catalytic reduction) or a diesel oxidation catalyst (DOC) combined with a diesel particulate filter (DPF).” 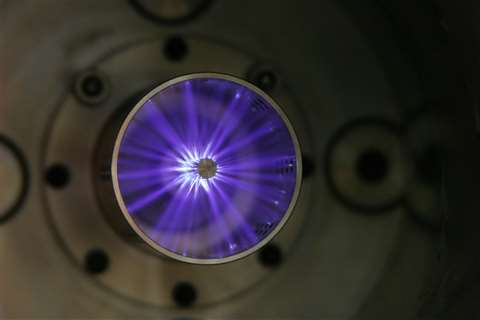 TPS said its aftertreatment system can replace a DPF, eliminating >85% of particulates and cutting NOx by 80%. (Photo: Transient Plasma Systems)

The TPS aftertreatment solution eliminates the DPF and its need for regeneration, plus is easier to inspect and maintain. It is also customizable and scalable to different engines and equipment, and is available for both new product development and as a bolt-on retrofittable solution.

While many companies might initially target the small end of the application spectrum for new product development, TPS set its sights on heavy-duty applications such as large on-highway vehicles, off-highway equipment, power generation and even the marine industry.

“There isn’t a silver bullet – like, just put this on every single engine in this form and you’ve got it solved,” Singleton stated. “There are niche problems that we’re solving… For the off-highway work that we’re doing, which is a big amount of the work we do, it’s targeting particular regulations that are specific to the applications.”

For example, an OEM may come to TPS needing to reduce NOx by a specific amount in order to meet regulations that could otherwise require a whole new engine. “In each market, it’s a different problem,” Singleton said. “We’re trying to work with the OEMs to say: Here’s the problem we can solve for you, and this is what our solution looks like in this form.

TPS has been making power supplies in the 1 kW range for many years. “We’re very experienced there, so we can quickly deliver those to the smaller engines,” Singleton said. Yet, significant funding has been directed toward heavy-duty applications all the way up to diesel-powered vessels.

“That comes down to a business decision. The ship problem is a big problem, so that’s why there’s been a lot of money placed there,” said Singleton. “From a practical perspective, it’s easier to start smaller. But if there’s a critical need that’s driving funding, then you can go big right from the beginning.”

The use of plasma technology in aftertreatment solutions has been evaluated by OEMs in the past.

“The idea of applying this type of plasma to treat emissions is not new,” Singleton acknowledged. “In fact, it was looked at very hard in the early 2000s by all the big names that you would expect. They, at that time, went with the SCR approach, and the reason is because the plasma systems weren’t ready. The power supplies were not reliable, they were big, they were expensive.”

TPS is working to convince OEMs to consider it again. “We’re visiting now to say: There’s decades of science showing this works. We know you’ve tried it, we know you’ve looked at it. What’s different now is we have a commercializable power supply to drive the plasma,” said Singleton. “The main thing I want to say to them is: Take another look, because it’s ready now.”

And while the cost of the system may still be a concern, Singleton said it must be measured against current systems. “A big chunk of where we put our venture capital money was into reducing cost. Obviously, going to higher volumes is one way to reduce cost, and that’s going to be critical in getting it adopted quicker. But what we showed in the past year and a half is that we can fit within the cost structure of existing technology, if you look at the SCR, the DOC and the diesel particulate filter.”

The benefits provided are also commensurate with the cost. “If you need to meet a regulation that says you have to [remove] 80% of the particulates, that’s one cost,” said Singleton. “If you had a critical need – like, ‘We’re going to lose this entire market if we don’t get it to 90%’ – it would increase the cost of the system but you get more benefit out of it.”

Then there’s the capability to future-proof existing ICE technology. Not only can current equipment be retrofit with the TPS system, it’s fuel agnostic. “If you go from diesel to a lower carbon fuel, it’s still going to work,” Singleton said, adding, “We feel that, by working with the OEMs, we’ll have the system ready for the next generation of fuels.”

The plasma-based ignition system is “a little more subtle” in how it works, said Singleton. The retrofittable system replaces the spark plugs used in a conventional spark ignition engine with non-resistive plasma plugs that connect to an ignition module, which is in turn wired to a TPS power supply. This combination produces fast, precisely controlled bursts of plasma to create high peak power that enables stable, lean-burn operation of the engine with low-energy ignition.

“What all engine designers have wanted to do was to be able to run combustion modes that are more efficient,” Singleton commented. The TPS ignition system widens that “ignitability window,” he said, enabling far less fuel to be used in the ignition process – all the while achieving better engine efficiency and reduced CO2 and NOx. “If you’re putting in far less fuel, and you’re also going to burn at a lower temperature, that is going to lower the emissions.”

According to TPS, the system has been proven to improve fuel efficiency by as much as 20% at low load points (e.g., highway driving) and 10% to 15% over an entire drive cycle. Efficiency gains have been shown in a variety of spark-ignited engine designs, including gasoline, hybrids and natural gas. 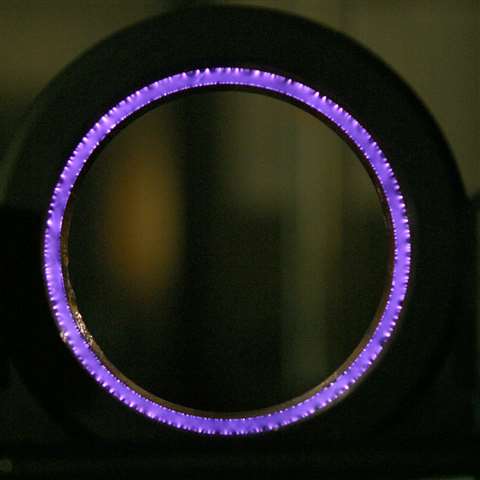 The plasma-based ignition system also offers opportunities with alternative fuels, like hydrogen. While hydrogen is very easy to ignite, NOx is a significant problem because the fuel is burning at a high temperature, Singleton noted. “Again, you would want to put less fuel in to burn at a lower temperature, which is going to reduce the NOx.”

Other alternative fuels for ICEs have proven very slow to burn and difficult to ignite. “Engines have become much more efficient than they were even 10 years ago. The last sort of block of efficiency on the table before you hit the limits of physics are related to ignition,” Singleton said.

“The future is going to be this sort of eclectic mix of different fuels, different types of solutions, hybrids – all these kinds of things for different markets. The TPS ignition technology is going to widen that engine designer’s operating window. They can now stretch the limits of what they could do before.

“We see this as being part of every combustion solution essentially going forward.”

While Singleton sees various applications for the ignition technology, initial targets explored have again been on the heavy-duty end, including power generation and natural gas-powered trucks.

“While we’re sort of vetting the technology through all the channels, I think adoption will be on the heavy-duty side first and then we’ll go into automotive,” he said, noting applications such as power generation tend to “move faster.” “From a business perspective, their timelines to get a new product in the market are quicker.”

Though the system could prove a quick, drop-in solution for low-horsepower spark-ignited engines such as those powering light-duty construction equipment, Singleton said, “The challenge there, again, is cost. Those are really inexpensive engines. That’s why this past year and a half has been focused on getting the cost down so that we could jump there.”

TPS has worked extensively with OEMs to conduct tests on the ignition technology, obtain feedback and identify both the opportunities and challenges ahead. “We learned with them… what are the problems that they see so we’re not developing it in the dark,” said Singleton. “It’s been a very positive way to develop a product with multiple partners.”

OEM partners will continue to prove critical in crossing any final barriers to commercialization for both products.

“On the ignition side, we feel very confident that we can [stand up] against existing ignition technology and have high reliability. The immediate reason for that is that it’s all based on known solid-state devices that have very long lifetimes,” Singleton said.

“On the emissions side, it’s going to be a little more work in the beginning because you need to put time on those aftertreatment systems to know what the challenges are that are going to come up on the physical device in the exhaust pipe. We have no concerns about the power supply, but what is happening in the tailpipe, we need to explore. So again, that just takes testing and a partner that can put… thousands of hours on the engines very quickly.

“From a technology perspective, we’ve cleared most of the hurdles that… the OEMs have set out. So, really, it’s about commercialization at this point. It is about locking in those commercialization agreements and figuring out who are the partners that are going to take this over the finish line with us. That’s what comes next for us.” 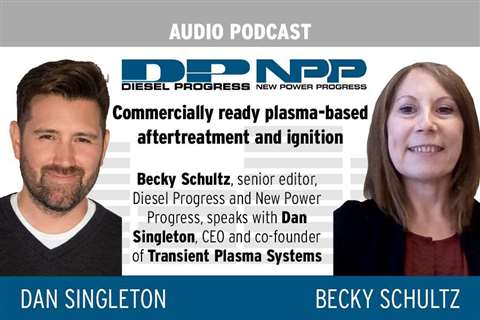 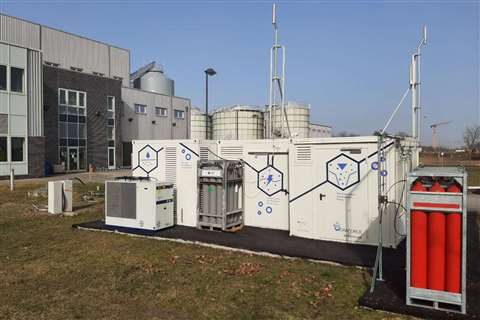