The 46th Alpine World Ski Championships has been taking place in Cortina D’Ampezzo (Italy) from 8 to 21 February. To host this major event in the charming town in the Italian Alps, the organizers appointed Visa S.p.A. as Technical Supplier to provide 50 Onis Visa generating sets delivering reliable and quiet power. 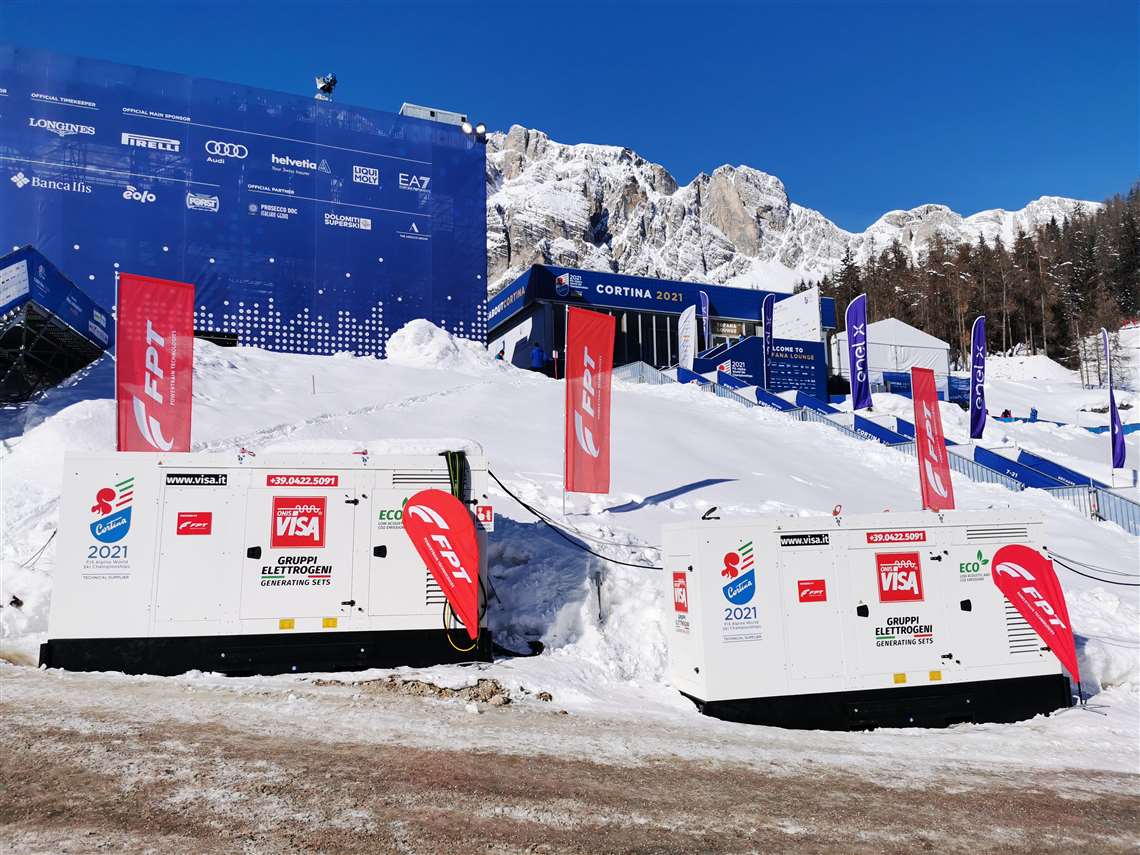 Visa gen-sets powered by FPT Industrial are employed at the World Ski Championship in Cortina, Italy

The gen-sets are equipped with diesel engines by FPT Industrial, which is a partner of Visa S.p.A. since more than 40 years.

The units by Visa SpA have a compact design and grant low emissions and noise levels; they are equipped with state-of-the-art control devices enabling automatic starting and stopping, as well as parameter monitoring and diagnostics with constant feedback on the units’ status.

“We are proud to be Technical Supplier for such an important event,” said Marco Barro of Visa S.p.A. “All the more so since we are ensuring that the races and all accompanying events can go ahead using the latest generating sets and round-the-clock on-site technical support, in order to guarantee the highest levels of efficiency and immediate response.”

The Onis Visa units were immediately put to test during the event’s official inauguration on 7 February, when the units had to deal with an emergency: a medium-voltage substation near the finish area at Rumerlo, right next to the VIP Area Tofana Lounge, failed due to a transformer fault caused by the extreme weather conditions, as the first few days of the event were hit by very heavy snowfalls. The swift response of the Visa generators provided the power grid with the necessary backup and enabled a normal, uninterrupted supply of electricity to all the loads connected to the line.

The entire opening ceremony was also powered by the Visa S.p.A. gen-sets: two container units, connected in parallel, supplied electricity for the TV broadcast and the lighting and stage setup, while two more FTP Industrial-powered units, once again connected in parallel, provided support to the services for the event’s global TV coverage.

Moreover, the service team of Visa S.p.A. and FPT Industrial is always on hand to provide assistance for the event throughout the World Championships, overseeing operation and ready to step in if required. “Nothing can be left to chance during a World Championship,” said Ettore Brunero of FPT Industrial’s distributor Bimotor S.p.A. “And we’re here at Cortina to support Visa S.p.A. alongside FPT Industrial, by supplying the best engines for the customer’s on-site needs, in terms of sustainability and reliability even in the most challenging conditions.”

“More than 500 million people worldwide will watch the Cortina World Championships,” Carlo Moroni, head of Communication at FPT Industrial, concluded, “and engineering excellence, combined with the proven reliability of FPT Industrial engines, will enable them all to enjoy an unforgettable display, in the hope that this event shows that a return to normality is feasible.”