The United States Postal Service (USPS) announced that it plans to acquire at least 66,000 battery electric delivery vehicles as part of its 106,000 vehicle acquisition plan for deliveries between now and 2028. The vehicles purchased as part of this anticipated plan will begin to replace the Postal Service’s delivery fleet of over 220,000 vehicles. 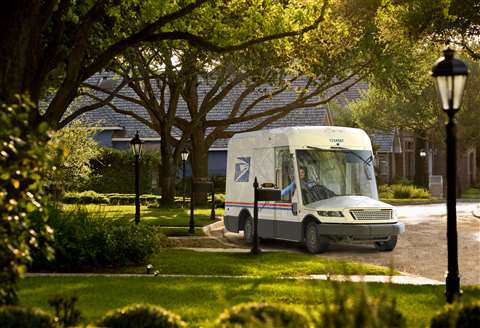 Oshkosh Defense will build the Next Generation Delivery Vehicle for the U.S. Postal Service. (Illustration: USPS)

“We have a statutory requirement to deliver mail and packages to 163 million addresses six days per week and to cover our costs in doing so – that is our mission,” said Postmaster General Louis DeJoy. “As I have said in the past, if we can achieve those objectives in a more environmentally responsible way, we will do so.”

The Postal Service anticipates at least 60,000 Next Generation Delivery Vehicles (NGDV), of which at least 75% (45,000) will be battery electric. As part of this plan, a total of 21,000 additional commercial off-the-shelf (COTS) vehicles are also expected to be battery electric, depending on market availability and operational feasibility.

For any COTS vehicles purchased, the Postal Service will include a preference for domestic manufacturing.

The announcement was enabled by the Postal Service’s overall network modernization efforts which allows for a more rapid deployment of EVs, and what it said was its improving financial condition which included the IRA funding.

The Postal Service said it will continue to evaluate and procure vehicles over shorter time periods to be more responsive to its evolving operational strategy, technology improvements, and changing market conditions, including the expected increased availability of battery electric vehicle (BEV) options in the future.

“The $3 billion provided by Congress has significantly reduced the risk associated with accelerating the implementation of a nationwide infrastructure necessary to electrify our delivery fleet,” said DeJoy. “While most of the electric vehicle funding will continue to come from Postal Service revenues, we are grateful for the confidence that Congress and the administration have placed in us to build and acquire what has the potential to become the largest electric vehicle fleet in the nation.”

“What is less widely understood is that our network modernization initiative is necessary to enable this vehicle electrification and will also provide meaningful cost and carbon reductions in other ways. A key focus of our modernization effort is to reduce inefficient transportation and improve distribution operations, resulting in far less air cargo and far fewer truck trips. When combined with our substantial commitment to the electrification of our delivery vehicles, the Postal Service will be at the forefront of our nation’s green initiatives.”

The Postal Service said it is steadfastly committed to the fiscally responsible and mission capable roll-out of electric-powered vehicles for America’s largest and oldest federal fleet. The agency has continually assessed its capacity, financial position and vehicle mix over the past year: