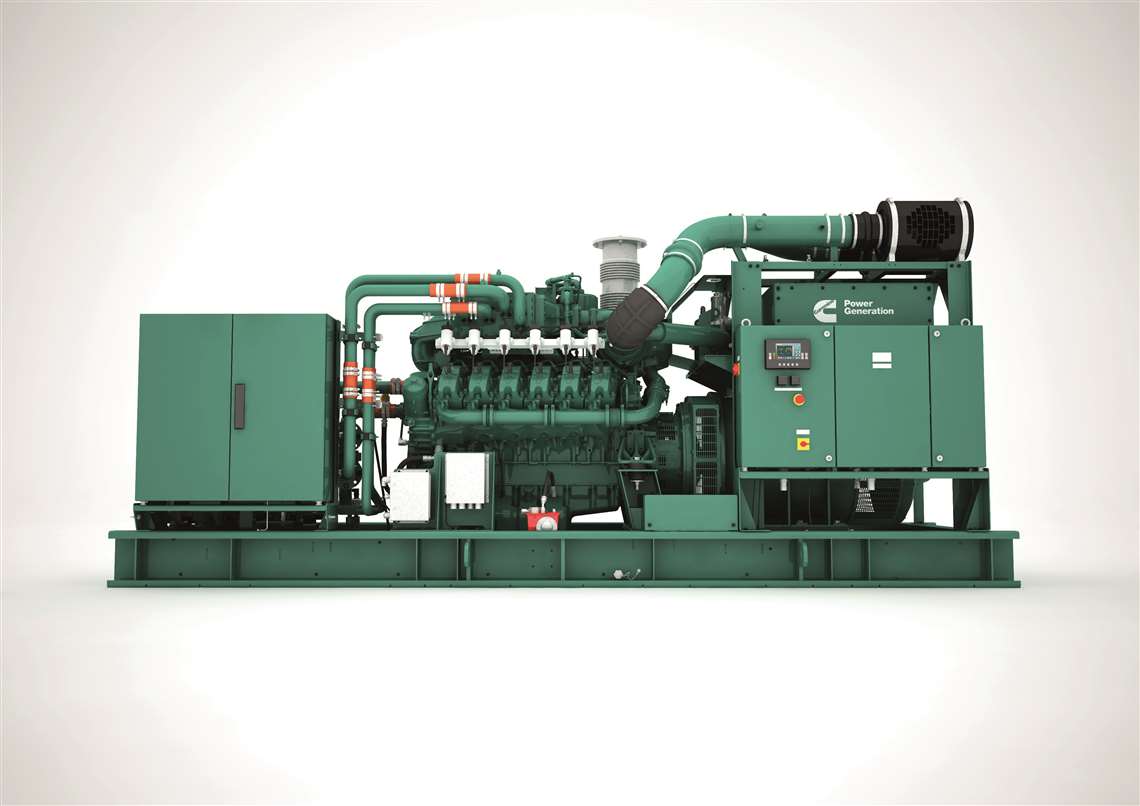 A new series of high efficiency gas generator sets for continuous duty and peaking power applications has been launched by Cummins.

The first unit is now being used to generate power for the Cummins engineering, logistics and warehousing facility at Manston, Kent, England, where the gen-set development was carried out in one of the several on-site test cell facilities. The machines are built in Daventry, England.

The gen-sets are driven by Liebherr’s G9512 gaseous-fueled engine. With a displacement of 25 L, the single ABB turbocharged, 12V engine has a 13.3.1 compression ratio and is engineered to run on pipeline gas and biogas down to 18MJ/Nm3 and limited, aggressive fuels without derate.

The company said the target applications for the new gen-set series are cogeneration, trigeneration, prime/continuous, island and peaking power.

Cummins was also keen to promote the sets’ low emissions capabilities. NOx emissions are as low as 0.5g/hp-hr (250 mg/Nm3) without aftertreatment and the units meet European Union and U.S. directives.

The new C25G means that at 50 and 60 Hz frequency there are now six models in the Cummins gas product portfolio from the QSK19G at 300 kWe continuous to the 2 MW (continuous rating) HSK78G.

“The C25G nicely fills a gap in the market for Cummins and is a truly global product capable of providing competitive advantage to its user through enhanced and proven market leading product capabilities such as meeting the stringent European Grid Code Compliance requirements ,” said Tejas Amin, global chief engineer for Cummins Power Systems, based at Manston.

“The use of the Liebherr G9512 engine on the Cummins genset is an extension of our existing relationship and collaboration we have with Liebherr which allows Cummins to meet the demands of their customers in a rapidly evolving energy sector,” said Amin.

Amin added that the gen-sets underline the company’s commitment to its recently announced Planet 2050 Strategy whose main aims include reducing absolute greenhouse gas (GHG) emissions from its own facilities and operations by 50% and also to cut absolute lifetime GHG emissions from newly sold products by 25%.

The engines drive four-pole Stamford HC6 alternators and engine and generator functions are provided by a ComAp controller. The sets have closed crank ventilation and black start capability with major overhauls every 64,000 running hours.

Since September 2019, the Manston facility has gone “off grid” and is using the C25G to provide all power to the site, which employs more than 300 people, with extra power exported into the national grid.

This has led to cost savings to the company of approximately $18,000 to $20,000 per month and gives Cummins the chance to carry out additional validation and field testing for the sets, for which the company is already taking orders. In combined heat and power (CHP) applications, excess electricity produced can also be used for heating or cooling the facility.