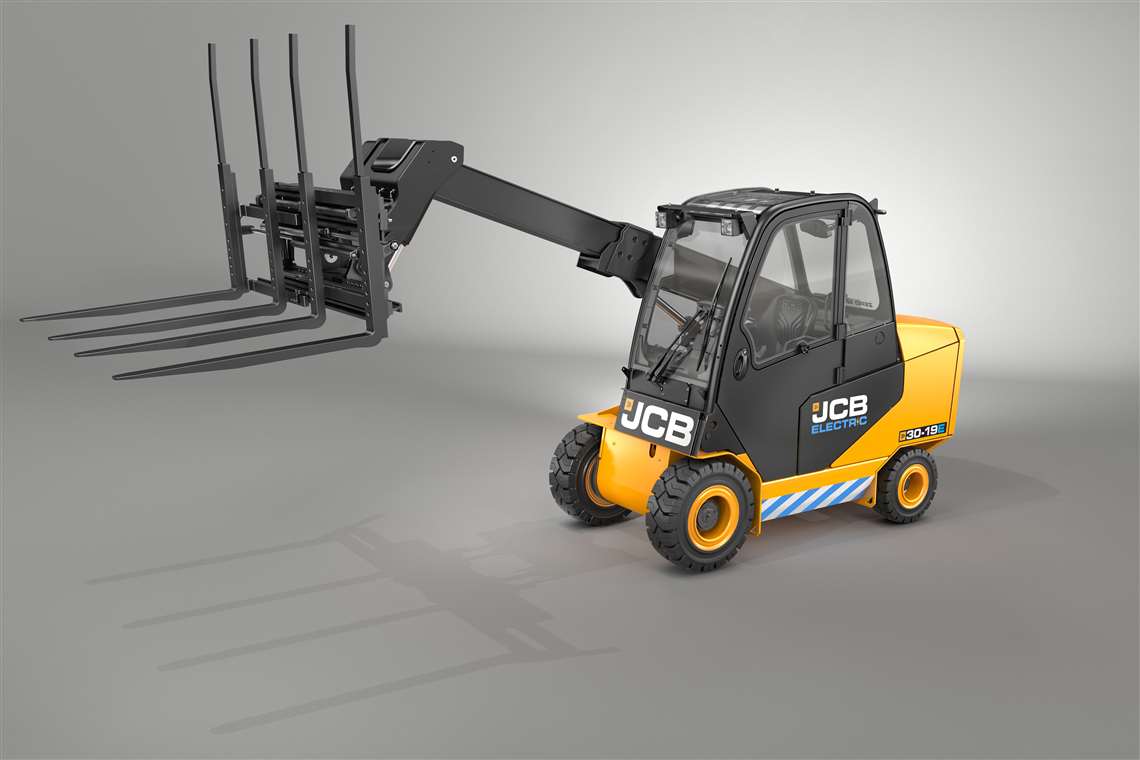 JCB has launched of an electric version of its Teletruk model which it said is designed to reach into a global market where almost 250,000 units are sold globally every year.

Launched in October 1997, the JCB Teletruk is claimed by the company to be the world’s only telescopic lift truck and offers users the benefit of forward reach due to its telescopic boom.

JCB has now unveiled the new JCB 30-19E, the first electric powered model in its range – opening up new opportunities for a machine which is used in builders’ merchants, ports, recycling centres and industrial facilities.

Until now JCB’s Teletruks have been powered by diesel and LPG and used predominantly in outdoor applications. With the launch of the new electric model, JCB said the Teletruk now becomes suited for other tasks inside buildings as well as outside.

JCB Chief Innovation Officer Tim Burnhope said: “JCB is a leader in innovative clean diesel technology but we are also developing other clean technologies for smaller machines in our range. We are hugely excited at the opportunities presented with the launch of an electric powered Teletruk because it opens up so many new markets for us.”

JCB Industrial General Manager Paul Murray said: “Until now the Teletruk has been offered with diesel and LP Gas-powered engines and used mostly in outdoor applications. With the launch of the electric-powered JCB 30-19E, the opportunities are huge. We now have a machine that is capable of operating at optimum efficiency both inside and outside the warehouse, distribution centre or factory facility – delivering the ultimate in machine versatility.”

JCB said Teletruk is the suitable for sites where containers, curtainsided trailers, vans and other delivery vehicles have to be loaded and unloaded quickly, safely and efficiently.

JCB added that because it is battery-powered, the JCB 30-19E is quiet and produces zero emissions – making it suited to tasks inside a building, while its fully sealed, weather-proof body protects the machine’s driveline and other key components from the elements when the Teletruk is required to work in the yard.

Power is provided by an 80-volt lead acid battery which can work a full eight-hour shift on a single charge. The battery compartment is positioned at the rear of the truck and has been designed to allow quick and easy battery changeover. Using a single point hoist or another lift truck, the battery can be swapped in around two minutes.

Due to its electric driveline, the new JCB Teletruk can climb a 21% gradient or ramp and productivity is further enhanced with full free lift of 1575 mm as standard. Like all Teletruk models, the JCB 30-19E features a side-mounted boom and using the telescopic forward reach, it has a lift capacity of 1900 kg at 2 metres, meaning palletised loads weighing can be loaded to the far side of a curtainsided trailer.