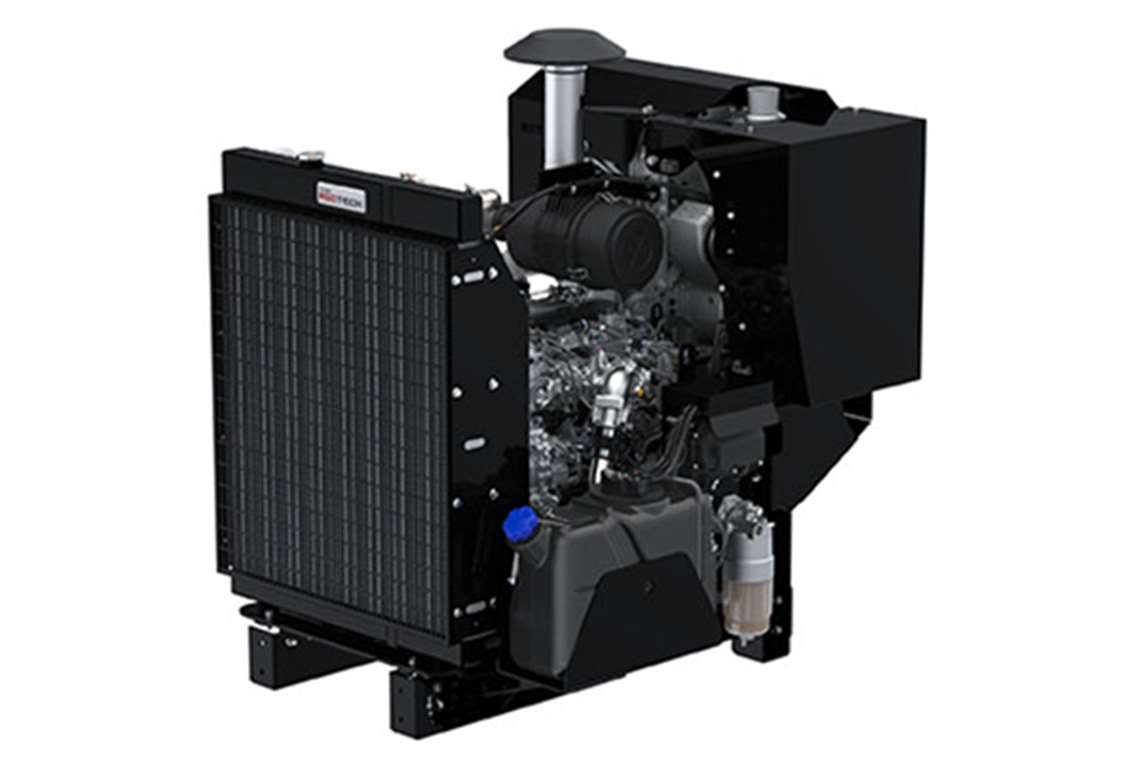 While there is likely never a period when engineering time and resources aren’t at a premium for OEMs and distributors, that situation has only been exacerbated by the COVID-19 pandemic. Companies are being stretched thinner than ever and often can dedicate fewer people to product development projects.

In an effort to make the development process simpler, less expensive and less time-consuming for products such as generator sets, light towers and welders, Isuzu Motors America LLC, Plymouth, Mich., is launching a new range of engineered power units designed to take much of the engineering work out of the process.

Part of the company’s REDTech (Reliable Eco-Friendly, Durable and Technologically Advanced Diesel Technology) engine range, the Tier 4 final certified 4J-Series diesel is an inline four-cylinder available in constant speed ratings of 95 hp at 1800 rpm and variable speed outputs up to 113 hp at 2200 hp.

Turnkey Package
The engine and accessories are mounted on a skid base, with the engine positioned on vibration isolators. Isuzu uses a common wire harness across its 4J- and 4H-based power units.

“It’s basically it’s a turnkey package, minus the control panel,” said Cody Garcelon, director, Applications and Sales Engineering at Isuzu. “That includes things like urea lines, urea tanks, the supply module and every other electronic or mechanical component.

“There are only two things that we don’t sell with the power unit. One is the control panel and the other is the generator. We have 100% validated one complete generator model/frame line, so if they use one of these complete generator designs (power unit, generator, skid base) that makes the installation review process very simple.” In addition various cross members for mounting seven different common generator brands/models to the power unit have been designed, he said.

To keep the OEM equipment as compact as possible while accommodating the broadest range of options, Isuzu also has the ability to mount the selective catalytic reduction (SCR) aftertreatment horizontally. At ConExpo, Isuzu debuted its horizontal SCR configuration.

“We had previously had a vertical SCR system and we realized it was not very flexible for some applications,” said Ken Martin, director of Sales & Service at Isuzu. “So we’ve now launched a horizontal version that we’re able to apply to applications where there’s a requirement for low height or some different positioning. It uses the same SCR components, just in a different location where it can fit the application better.”

Westquip is a 39-year-old engine distributor and packager that also manufactures its own line of engine-powered generator sets, pump sets and light towers.
The company is using the Isuzu 4J-Series power unit as the foundation of its newest WQ60 generator set. An addition to the WQ60 line, the new Tier 4 certified gen-set is rated 60 kW prime and 65 kW standby and uses a single bearing, brushless Stamford Newage alternator with automatic voltage regulation driven by the engine to deliver from 120 to 600 V power at 60 Hz.

“The biggest time savings for engineering was the testing done at Isuzu,” said Darren Dumont, operations manager at Westquip. “We used their standard power unit with the rear bell housing mount SCR configuration. No customization was necessary.

“We completed the original prototype generator and shipped it down to them for testing. This probably saved us at least 40 hours – and probably around $4000 savings.”

That kind of time – and money – savings is not atypical, Garcelon said.

“In the past, to do all the validation for something like a gen-set, it could take weeks if everything goes great on the first pass,” Garcelon said. “With the power units, we’re able to do all standard installation tests much quicker, eliminating a lot of time and expense for both the OEM and our network.”