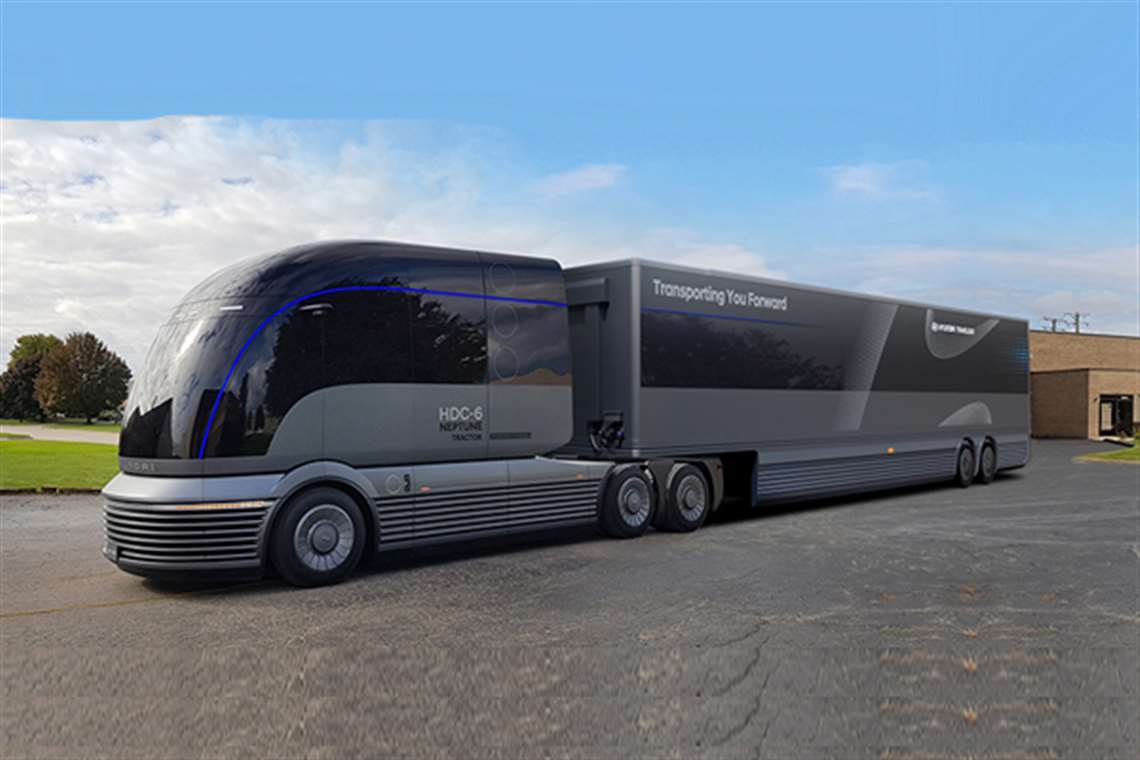 In 2013, Hyundai launched one of the first mass-produced and commercially available fuel cell electric vehicles and in 2018, Hyundai launched its Nexo dedicated fuel cell SUV. Last December, Hyundai said it invested $ 6.4 billion to accelerate the development of a hydrogen society, looking beyond passenger vehicles.

“Today at this show, by showing HDC-6 Neptune, the first hydrogen-only concept for Hyundai Motor Co.’s commercial vehicles, we will start exploring opportunities in the United States commercial vehicle market,” said Edward Lee, head of Hyundai Commercial Vehicle Business Division. “Furthermore, we are willing to work with other partners to pave the way to establish a hydrogen ecosystem for CV.”

The HDC-6 Neptune truck is a Class 8 vehicle that uses seven tanks that store gaseous hydrogen at 5000 psi to fuel a pair of 196 kW Nexo fuel cell stacks. The fuel cell generates energy to power a 476 hp electric motor that drives the wheels through an automatic transmission.

Through its joint venture with H2 Energy, Hyundai is commercializing fuel cell electric trucks by providing 1600 FCEV heavy-duty trucks to the Swiss commercial vehicle market, beginning in 2019 through to 2023. With Hyundai’s commercial vehicle entry to the European market, the company said the U.S. market is an important next phase of the company’s FCEV 2030 vision.

Hyundai also chose NACV to Introduce Hyundai commercial vehicles to the U.S. market. While Hyundai’s commercial offerings are well-known elsewhere, this is the first time they have been shown in the U.S. Moving forward, Hyundai said it will start exploring opportunities in the United States commercial vehicle market, as well as being open to working with other partners to pave the way to establish a hydrogen ecosystem for CV.

Hyundai said the HT Nitro ThermoTech will be one of the first trailer manufacturers in North America to introduce a refrigerated trailer using a cryogenic nitrogen refrigeration technology system. The concept trailer, developed in collaboration with Air Liquide, has a carbon footprint up to 90% lower than a traditional unit.

“The fuel cell powertrain gave us the opportunity to redefine the classical typology and architecture of the truck,” said Luc Donckerwolke, Chief Design Officer of Hyundai Motor Group. “The Hyundai Commercial Vehicles Design Team started with a white sheet of paper focusing on the new defined functionality resetting all standards in order to project commercial vehicles in the future.”