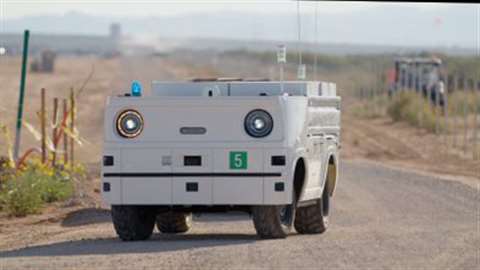 Honda and Black & Veatch said they recently tested the prototype Honda Autonomous Work Vehicle (AWV) at a Black & Veatch construction site in New Mexico. During a month-long field test, the second-generation prototype of the electric Honda AWV successfully performed a range of functions including towing activities and transporting construction materials, water and other supplies to pre-set destinations within the worksite.

While Honda previously performed testing with an earlier generation of the Honda AWV, this field test was the first to deploy multiple units working collaboratively to support construction use cases, the company said.

What does the Honda AWV include?
First introduced as a concept at CES 2018 in Las Vegas, the Honda AWV combines the company’s off-road side-by-side UTV platform with advanced autonomous technology. The result, Honda said, is a work vehicle that can be deployed in a variety of dynamic work environments.

Honda said the AWV prototype incorporates a proprietary powertrain that incorporates a single electric drive motor that “falls into the 15 to 30 kW range.” The motor is powered by lithium-ion batteries in the “6 to 20 kW range.”

Battery life, Honda said, is dependent on the payload, terrain and operating environment. During field testing, AWV performed up to eight hours with a range of approximately 27.9 miles (45 km) in a high-temperature environment.

The vehicle employs a suite of sensors for autonomous operation, using GPS for location, radar and lidar for obstacle detection and stereoscopic (3D) cameras for remote monitoring. The vehicle also can be operated by remote control.

Black & Veatch selected a solar energy construction site where support structures for solar panels are laid out in a grid pattern at regular intervals. Honda produced a high-definition map of the 1000-acre site that allowed Black & Veatch operators to precisely set start and stop points for multiple Honda AWVs using a cloud-based app interface that ran on tablets and PCs. The company’s personnel were trained by Honda’s engineers on the operation and safety protocols of the vehicles and Black & Veatch provided detailed feedback for product and business requirements that Honda said will help enhance AWV’s capabilities and services.

AWV battery system
The vehicles successfully delivered materials and supplies along a calculated route and proved capable of stopping within centimeters of the pre-set points. The field test also demonstrated the viability of the AWV’s battery system to support energy intensive sensors and provide vehicle propulsion, while operating up to eight hours in a high temperature environment. The vehicle, which has an unladen weight of 1590 lb., carried payloads of nearly 900 lb., and in a separate use case towed a trailer carrying over 1600 lb.

Based on the capabilities verified in this field test, Honda believes the Honda AWV will be capable of providing a wide range of services to a variety of industries that need a rugged off-road autonomous solution, especially where workforce constraints and safety concerns make other solutions impractical.

Honda has not announced commercialization plans for the Honda AWV but said it continues to advance the platform through field testing.

See a video of the Honda AWV at https://honda.us/AWV.