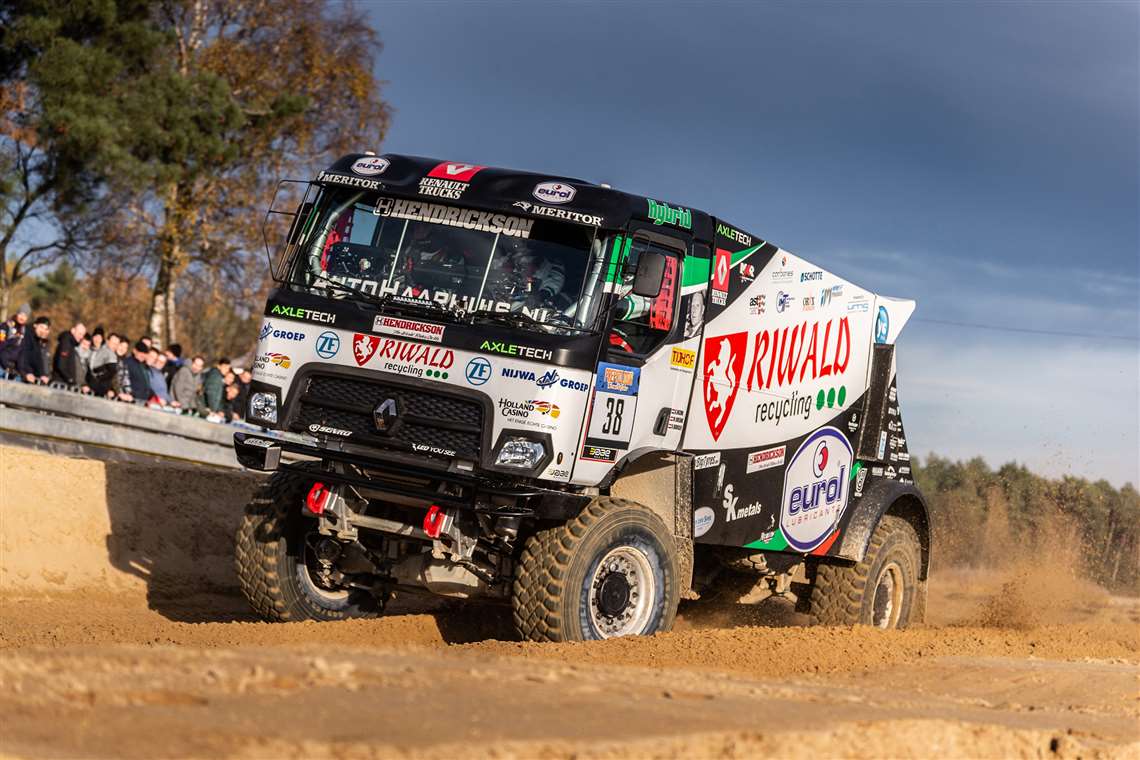 When the starting flag dropped for the annual Dakar Rally on Jan. 5 in Jeddah, Saudi Arabia, the Riwald Recycling Dakar team started the race in historic fashion by piloting the first hybrid truck ever to compete in the 4900-mile endurance event.

The Riwald Dakar vehicle is a Renault Trucks C460 truck reconfigured by MRK Technology to incorporate a Renault DXI 13 diesel engine uprated from 500 to 1040 hp, along with a specialized driveline developed specially for the vehicle. The core of the driveline is a special prototype of ZF’s central electric axle drive, reconfigured in terms of its hardware and software to make it fit for the rally. ZF has designated the final product CeTrax Lite RS.

The CeTraxLite RS systems supports the main diesel engine by providing an additional 1032 lb. ft.(1400 Nm) of torque, a cruising power of 80 kW and a peak output of 150 kW.  Developing a specific gear ratio proved to be a tough challenge, ZF said. The 13,000 rpm asynchronous electric motor had to be adjusted to the 2700 rpm that the 1040 hp diesel engine produces at the transmission output. In addition to the electric motor, ZF also supplies integrated power electronics and the hybrid control unit, including the software that has been programmed specifically for the Dakar Rally.

“The extreme conditions of the Dakar Rally – lots of sand and rough terrain – offer us a unique and amazing opportunity to subject our hybrid driveline to the ultimate acid test,” said Ralf Boss, director of Special Vehicle Systems at ZF.

Other components in the Riwald Dakar vehicle include Axle Tech 4000 grand series front and rear axles and a Hendrickson suspension.

On test circuits in Poland, France and the Netherlands, the Riwald Dakar team and driver Gert Huzink were able to snatch a few seconds off their usual times. Besides the extra power, the time advantage was due the recuperative effect of the electric motor, which allows the brakes to be applied later and harder, enabling the vehicle to be driven at its limit speed for longer. In addition, the 400 V battery can be recharged more quickly while driving so that it can deliver another bout of torque by the next dune.

“The components simply work with each other in perfect harmony,” said Mario Kress, chief designer and owner of MKR Technology. “We’re excited about how quickly and effectively the CeTrax Lite RS boosts the trucks performance.”

The Dakar Rally will finish Jan. 17 at Al-Qiddiya, Saudi Arabia.