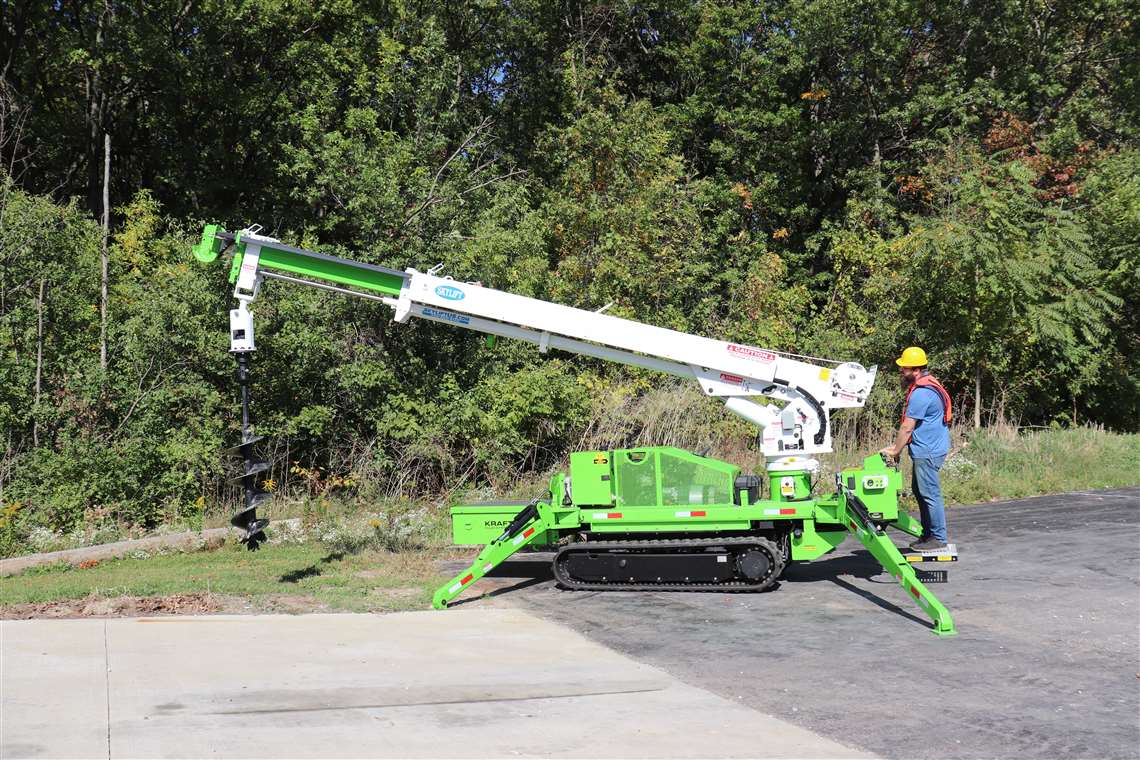 Skylift has launched its new MD6000-E digger derrick, what the company calls an electric machine with diesel engine intended to serve exclusively as a backup in the event the electric system is unavailable.

At this point in time, both the manufacturers and the users of equipment are facing something of a dilemma. With the trends toward electrification of vehicles and machines, both are wondering about if there are steps down the electrification path they ought to be taking now.

Equipment manufacturers can’t ignore the push toward electrification, but they also can’t afford to build machines too complex or too expensive for their markets. And while many users are equally curious about electric machines, they’re also leery of buying something they’re not yet assured will perform as needed on the jobsite.

Now in an effort to address both sides of the electrification conundrum, Skylift, a family-owned manufacturer of specialized easement equipment, has teamed with Kraft Fluid Systems, to develop the company’s first electric machine, the MD6000-E digger derrick.

While engineered to operate through the average workday in fully electric mode, the MD6000-E includes a diesel engine, intended to serve only in the event the electric system is unavailable.

“In a sense, it could be seen as a hybrid machine,” said D.J. Simonovich, chief engineer at Lorain, Ohio-based Skylift. “But we really think of it as a machine with dual power sources – electric with the diesel as a backup.

“The whole trend in everything is moving more toward electric. We knew the sooner we could branch into that type of market area, the better. At the same time, the utility industry is very conservative, so we knew if we came out with just an electric machine, it wasn’t going to be perceived well. And if you roll out a hybrid machine, they roll their eyes because of the experience a lot of them have had with hybrid machines.

“We wanted to bring out a machine that’s electric, but still has the diesel, so everybody’s happy.”

The new machine, developed over the course of the last year by Skylift and Kraft, is based on the company’s existing MD6000 mini derrick. “Kraft Fluid Systems has been a supplier to Skylift for 20 years on the hydraulic side,” said Brian Shockey, product manager for Electric Drives at Kraft. “The owner of Skylift wanted to build an electric machine and we had the experience to help them make that a reality.

“What Skylift wanted was to basically eliminate the diesel, put an electric motor on it and keep everything else the same. The operators really know how to run their machine with the hydraulics and controls the way they are, so they thought that would be the simplest way to go.” 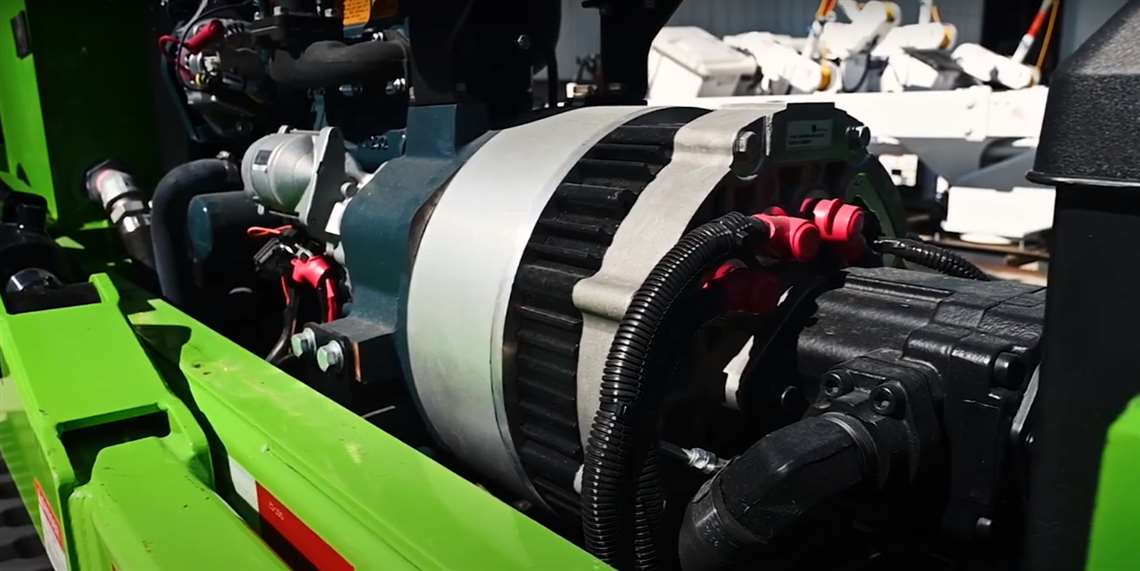 Much of the machine has remained unchanged, including the main hydraulic pump, the Danfoss hydraulic motors and valves that operate the boom, implements and track drive system, and the three-cylinder Kubota D1105 diesel engine rated 25 hp.

The differences begin with the addition of an InMotion GSM low voltage motor/generator positioned between the engine and the hydraulic pump. The motor/generator is typically operated by battery power but can also be driven by the engine through a centrifugal clutch, meaning that in the event of a problem with the batteries, the machine can be operated normally using the engine.

The engine and motor/generator charge the batteries, which can also be charged by plugging an onboard battery charger into a standard 120 V ac outlet.

The Lithonics lithium iron phosphate batteries are housed in a box added to the front of the machine. The 51 V batteries deliver 15.4 kWh of battery capacity, which will more than handle the average day on the job, Simonovich said.

The battery system also incorporates a timer function that shuts the electrical system down after two minutes of non-use. “If you walk away from the machine, it won’t just keep running the hydraulic pump,” Simonovich said. “It will shut off after two minutes to save the battery and then you can start it right back up with a flick of a switch.”

The other challenge in the design of the MD6000-E involved packaging the additional electrical components without overly changing the profile of the machine, which has to be compact and maneuverable enough to pass through gates and operate in backyards. 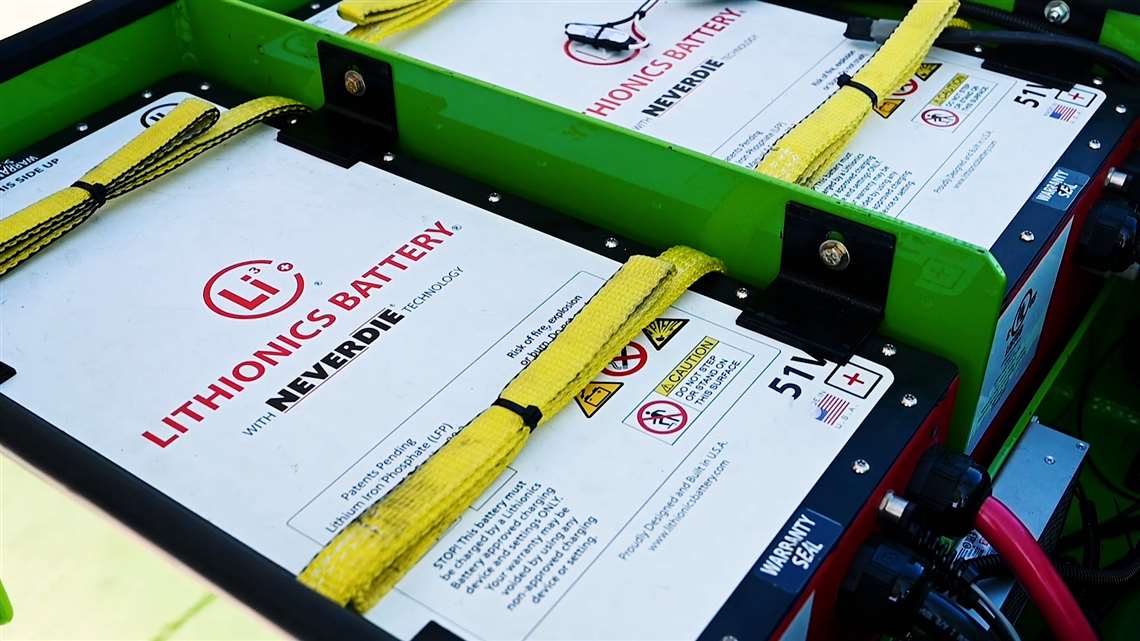 Lithonics lithium iron phosphate batteries are housed in a box added to the front of the machine. The 51 V batteries deliver 15.4 kWh of battery capacity, which the company said will more than handle an average workday.

“The modifications we had to do weren’t that extensive,” Simonovich said. “We elongated the engine bay a little bit to fit the diesel engine, the clutch system, the generator and the hydraulic pump.

“We kicked around putting the batteries here or there and we eventually settled on putting them into a box integrated into our frame in front. On our standard machine, there’s a platform on the front where workers will put tools or electrical transformers and carry them into the jobsite. The battery box on the front is structurally sound and then we put a heavy-duty lid on top, so they’re still able to use it as a platform to move material in and out of the jobsite.”

As the controls have remained the same from the conventional machine, no additional training was required when Skylift took the machine to customers for testing. “During testing, with all of the crews doing a normal workday, there was never one day where they ran out of battery power,” Simonovich said. “They ran primarily in electrical mode, never switched over to diesel mode and had no problem.”

And it was also during testing that a key attribute of the new machine jumped out: the MD6000-E is exponentially quieter than the conventional engine-driven machines.

“I wouldn’t say we didn’t think about it, but the whole noise aspect really didn’t come to light until we actually operated the machine,” Simonovich said. “We could hear each other talk and that’s such a safety improvement.

“A lot of the crews that use our machines will have a guy up in the bucket and there’ll be a guy on the ground watching and they’ll be communicating back and forth, usually with hand signals. During testing, we had a local power company test it and the guy was up there, using the machine in electric mode. He was using hand signals and then he said, ‘Wow, I can just talk to you guys from 30 ft. in the air and you can hear me clearly.’

“When you’re working on energized power lines, obviously you want good communication to stay safe and not waste time trying to figure out what each other needs. The production goes up they get things done faster.