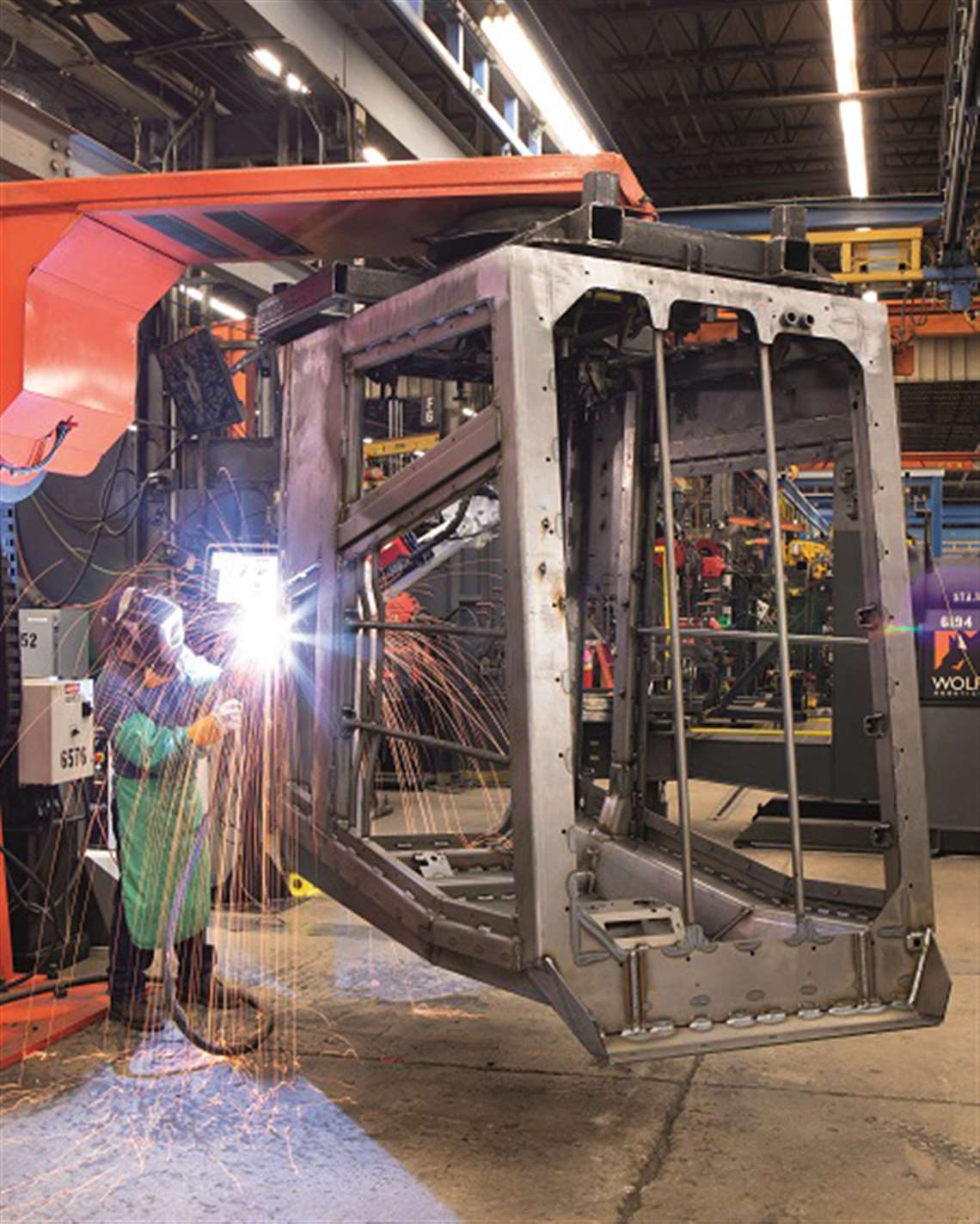 In business as in just about anything, being in the right position can make all the difference. Since late last year, Crenlo Engineered Cabs has found itself in a new — and potentially much more advantageous — position as a supplier of cabs for construction, military, mining, agricultural, forestry, rail, specialty truck and utility applications.

Crenlo Engineered Cabs is the new name — as of ConExpo-Con/Agg — that represents the merger between Rochester, Minn.-headquartered Crenlo Cabs LLC, and Worthington Industries Engineered Cabs (WIEC), previously a division of Worthington Industries. It includes Crenlo’s wholly owned cab manufacturing subsidiary in South America, Siac do Brasil, as well as Emcor, which builds enclosures and cabinets for electronic equipment in commercial and defense applications.

The merger of Crenlo and Worthington came about after both companies were acquired in November 2019 by Angeles Equity Partners, LLC, a private investment firm based in California.

And while it might look as though Crenlo is in the same boat as it was since 2012, when it was acquired by private equity firm KPS Capital partners and made part of multibrand company International Equipment Solutions (IES), in reality, the acquisition and consolidation with WIEC represents a whole new change in focus and opportunity.

“The arrangement before was a little skewed,” said Crenlo President and CEO John Duncan. “IES was in the off-highway markets, but a significant portion was from attachments sold to the distribution markets, with less going to OEMs. At Crenlo, we’ve always been 100% OEM focused. Crenlo makes a highly engineered product. A lot of the attachment business is ready-made, without a lot of OEM input. We were really two separate businesses that didn’t overlap.

“Now the way we’re set up, with Crenlo and Worthington together as Crenlo Engineered Cabs, we are teed up for success. In North and South America, we’re the cab leader, from a technology standpoint and from a capacity standpoint.

“Down the road – and there’s a lot that has to happen in between, including aligning all of our manufacturing facilities – we will really be a true global cab company. There really hasn’t ever been one of those, but a lot of our current customers are global and that’s something they would like to see from their suppliers, no question.”

If the fit is good, it won’t be surprising as the companies share a similar heritage.

Founded in 1951 by three former Donaldson Co. employees – with ‘Crenlo’ an amalgamation of their names – the Rochester, Minn., company was established just at the time when the industry was evolving from open machinery with no cabs (or even wooden cabs) toward operator compartments that offered functionality and style.

The company had success early, with its first two customers being Caterpillar and John Deere. Those two remain key customers and have since been joined by a variety of well-known brands.

WIEC was founded in 1969 as Angus Industries, the manufacturer of Angus Palm branded cabs for heavy off-highway equipment and trucks. Worthington Industries acquired it in January 2012 and the purchase included manufacturing facilities in Watertown, S.D., and Greeneville, Tenn.

“Angus Palm started nearly 20 years after Crenlo,” Duncan said. “Worthington is a $3+ billion company and cabs were a relatively small business for them. It was a way to take their traditional steel business, transform the steel with some value-add, weld it into a cab, and ship it.

“But a cab is really a very heavily engineered product. It’s the operator environment — where the operator lives during their day at work, the air they breathe, what they see, the control system. It’s the transition from the operator’s hands and eyes to the earth, to the field, to the grain. It’s not just a box with a seat in it anymore. Now it’s about keeping mobile equipment operators safe, comfortable, and productive.”

In another case of good timing, Crenlo Engineered Cabs is coming together at a time when many OEMs are looking to upgrade their cabs, in part because they now have the wherewithal to do so. For much of the last two decades, meeting engine emissions regulations was Job 1, 2 and 3 for OEM engineers. “All of the R&D money was funneled into engine development and emissions,” said Peter Decoo, Crenlo’s vice president of Engineering. “The companies that wanted to spend money on cabs — and their customers who were asking for advancements — were needing to invest in engines and emissions.

“Now there is a demand for the next round of operator-focused product development. That R&D money is a little more available and they’re willing to invest for that better operating environment.”

To take advantage of that, Crenlo has sought to optimize its manufacturing at its Greeneville, Rochester, Watertown, and Brazil facilities.  All maintain a variety of laser cutting, metal bending, fabrication, welding and painting capabilities, and over the last several years, have seen investments in flexible manufacturing systems, robotics and 3D printing used to help OEMs accelerate their new product introduction cycles.

“We’re over 20 robots and growing here in Rochester and we just put our first robot in at Brazil eight months ago,” Duncan said. “Along with our robotics in South Dakota and Tennessee, we have a lot of opportunity to bring all of our plants up to a higher level of technology to serve our customers with more capacity.”

“We have been changing our factories to flexible production models,” said Decoo. “In the past we would have one line for one product, now we can do mixed-model fabrication. That’s paramount for us to be able to bring in new business — and not just the regular-volume business, but the low-volume business as well.

“In the past, we were supporting projects for a few thousand cabs, now we have OEMs coming to us wanting a few hundred. We’re now able to be equally efficient, taking the same production processes, the same production line and putting multiple products on it, applying the same high-volume robotics and automated work production techniques to successfully service a wide variety of annual volume project sizes.”

“Our plan ultimately is to be able to manufacture any cab at any location,” Duncan added. “We have a long way to go, but that’s part of the integration process we’re aggressively working on.

“It’s important because if you imagine shipping a cab, you’re shipping a lot of air. And shipping overseas might not be the best value proposition, though companies do it. For us, it gives us more opportunity to look at a greater global manufacturing footprint.”

That global potential is being assessed as part of the integration between Crenlo and WIEC, Duncan said. WIEC was part of a collaborative cab alliance in Europe, Asia, and South America called the Global Cab Alliance. Duncan said Crenlo Engineered Cabs remains a committed partner in that alliance.

At the same time, the company already has made significant inroads in international sales with its Cobalt cab, a concept designed to offer broad customization off a standard base cab platform for non-ROPS applications such as ag equipment, roadbuilding and road maintenance machinery, railroad machines and waste management equipment.

“We have some very large customers, but one of the ways we can grow and diversify is by supporting a broad array of mid-size and low-volume OEM programs based on our customization capabilities,” said Mark Pillers, vice president, Global Cab Sales at Crenlo. “It’s really hard to do low volumes on a custom basis, so we decided the best way to serve smaller-volume customers was with an off-the-shelf product that could be significantly modified. Our mid-size customization programs are also very competitive.  We don’t shy away from customization – we encourage it.”

First launched in 2013, Crenlo has since developed a second-generation version, Cobalt II, which has found success offshore, particularly in Brazil and Australia. “It’s a little narrower and meets the roading requirements in Brazil,” Pillers said. “It also has a few different features that are more suited to the market there.”

Overall, Pillers said Cobalt has struck a chord because of its adaptability. “There were some cabs we saw that were basically a larger OEM’s cab being sold to a smaller OEM,” Pillers said. “The customer would have to take parts off and paint it their color. They’d often have to find a way to cover up another company’s — even a competitor’s — logo.

“Our focus was to create something that was very flexible, that could be customized to the small OEM’s application versus converted from something else.”

The Cobalt cab incorporates all-steel construction with an e-coat/powder paint topcoat engineered to withstand harsh environments along with expansive glass areas that offer wide visibility. Double-sealed doors can be mounted with front or rear hinges and the cab is available with adjustable telescoping mirrors, an array of halogen or LED or HID lighting and beacon options.

Inside the cab, the operator’s adjustable seat is center positioned for optimum visibility and a trainer’s seat doubles as a multiuse operator workstation. The interior also includes a tilting/telescoping steering column, stalk switch for lighting and horn controls and an integrated headliner that allows for custom placement of HVAC, lighting and audio controls.

The Cobalt cab is also available with a virtually infinite number of colors and individual branding space is available on the front and rear body panels, the doors, floormats, seats and steering columns.

“I came out of the machinery industry and I’m a huge fan of Cobalt and what it stands for,” said Decoo. “I came here from a large OEM and I can tell you, that brand identity meant everything to us. And the cab is one of the key touch points for brand identity.

“Cobalt is going into the smaller and very small OEMs that absolutely cannot afford to develop a cab of that caliber. They may not be able to develop their own cab, but they have the same customer expectations as far as levels of fit, finish, features and ergonomics, as with a large OEM.

“Now they’re able to get a cab that drives brand identity for them and we’re able to customize it so that they can have their own brand identity. That’s huge for the small OEMs and that’s the value we’re delivering with Cobalt and Cobalt II.”