A Walk Around Yanmar in Japan 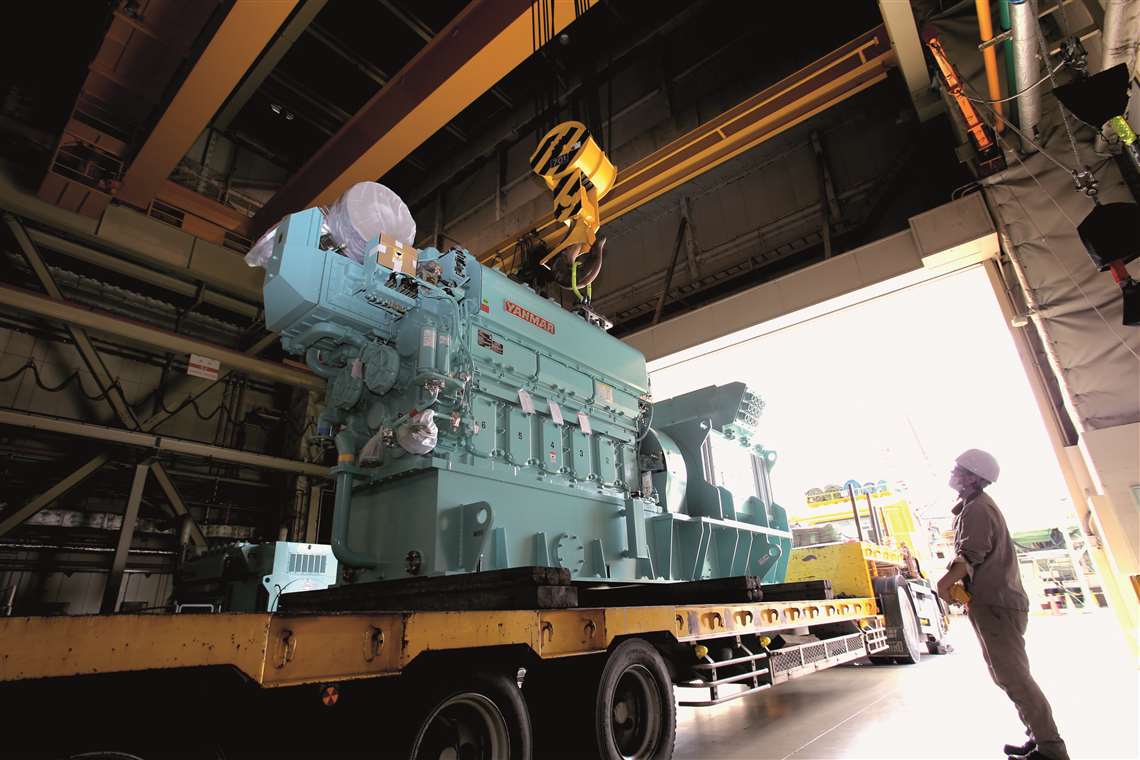 Today Yanmar has a global footprint, 20,000-plus employees and is run from its corporate headquarters in Osaka, Japan. Its engines are used in a variety of applications including vessels, pleasure boats, construction and agricultural equipment and generator sets. Diesel Progress International Editor Ian Cameron visited some of the Yanmar facilities in the country.

Yanmar’s futuristic new headquarters in Osaka sums up how far the company has progressed from its humble beginnings 108 years ago.

The building, naturally, is in the shape of a ship’s bow and is aiming to be a zero-emissions office with its own co-generation sets and solar panels typically providing enough power for the 12 story complex (and for the shops and businesses below), sensors which adjust the brightness internally and a 50 foot-high “living wall” of plants which capture carbon dioxide in the outside air.

For good measure there is also an on-site shrine where, on the first day of every year, employees can pray for the future success of the company.

Yanmar has engine factories globally, notably in China, Italy, Thailand and Indonesia with another, in north Chennai India making 80,000 units annually, due to start production this year for the domestic construction and agricultural equipment sectors.

There are also regional headquarters in the Netherlands, Singapore and Georgia in the United States.

However, its flagships plants are in Japan notably at Biwa in Shiga Prefecture where it makes smaller vertical, water-cooled diesel and gas engines and its Amagasaki plant in in Hyōgo Prefecture where it produces larger engines, components and industrial gas turbines.

The site has highly automated lines and can build more than 2,000 different engine models. However, the company recently introduced new models which offer higher power outputs.

The company also has a large-scale test centre on site carrying out validation and checking and capable of testing with various fuels and various altitude and temperature conditions.

The Amagasaki site is part of Yanmar’s Large Power Products Management Division and covers 76,600 m² and was completed in 1936 manufacturing, water-cooled, horizontal diesel engines known as the S-model although later switching to produce large diesels for propulsion and auxiliary engines for marine use, land use and general applications. In 1983 gas turbines were added to the product mix.

Cylinder blocks and liners, crankshafts, camshafts and connecting rods are all machined on sites and Yanmar said the plant also houses the largest polishing machine in Japan to polish crankshaft.

Diesel Progress International also talked to Makoto Shimmura who is a Yanmar director and board member who talked about the company’s future plans and prospects.

He said: “Our core competence has always been building engines and this is where we see out business continuing to grow – especially in overseas markets.

“To some extent our strengths have not been fully understood outside Japan, but we are changing that. We are also looking for long-term growth and, in that respect, it is helpful that we are privately owned. We will have an increased focus on new

“It is likely that our agricultural business will grow and expand where populations are growing around the world such as South-East Asia, India and African countries.

“But we also see growth coming through not only internal developments but also partnerships. I can foresee growth through possible partnerships even with start-ups and we are in the process of talking to start-up and developing companies.”

And does he see a long-term future for diesel engines in the face of the ongoing emphasis on electrification?

“Absolutely. The diesel engine will be an ongoing big line of business for us but, of course, there is always a good argument to be made for electrification.”

The monitors notify customer service staff or technicians if an error occurs and provides a response which minimizes downtime.

For theft prevention customers are notified by email and phone if equipment moves out of a pre-defined area or if it operates outside pre-set working hours.