A new flagship mower for Ferris 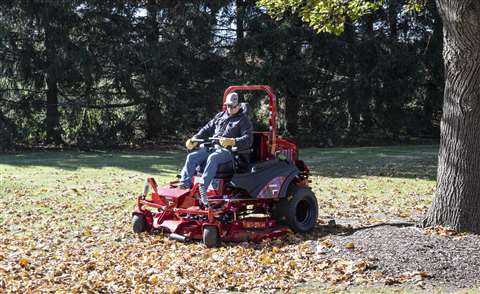 Ferris has begun production of its new flagship commercial mower, the IS 6200.

Commercial cutters – people who make their living mowing everything from suburban estates to golf courses and municipal parks – have never been shy about stating their desire for more horsepower from their mowers. Now Ferris, the Sherrill, N.Y.-based brand of Briggs & Stratton, is giving it to them.

The company has begun shipping its newest zero-turn commercial mower, the IS 6200, is powered by a Cat C1.7 turbocharged diesel rated 48 hp. The mower was virtually unveiled in late 2020 and the first machines were produced in late spring. The first public debut will be at the upcoming GIE+Expo show in Louisville, Ky., in October.

“What’s under the hood is what makes this machine amazing,” said Joe Ferris, product manager for commercial mowers and great grandson of the company’s founder. “We have a 48 hp, liquid-cooled, Caterpillar diesel. Our competitors are all around 30 hp and in many cases, we’ve got 18 hp more. This machine is literally a freight train going through tall, nasty grass.

“When we wanted to reinvent this series, we wanted to give it a little bit more performance and that means more power. That bigger power allows us to mow taller grass, which makes it more versatile. And it’s not only tall grass, it’s tall grass and a lot of it – and fast.” 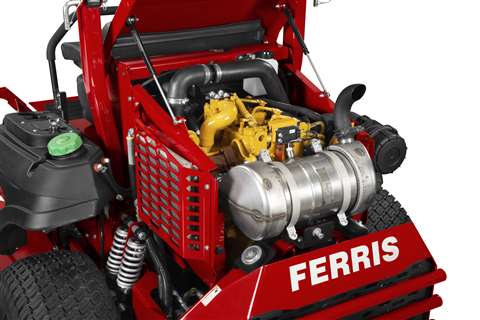 “It’s a Stage 5 diesel, so the same engine that we sell in North America, we can sell globally,” Ferris said. “And we’re shipping these globally, not just North America, it’s all over and as a company we sell quite a bit over in Europe. And they love diesel.”

This is not the first Ferris machine with a Cat diesel, as earlier the company offered a mower driven by a 1.5 L Cat 3013 diesel rated 33.5 hp. It was that previous experience that led Ferris back to Cat for the new ZTR.

“We had a Cat engine in the past, in a preceding model to this, the IS 5100,” Ferris said. “Those mowers are still in service with thousands and thousands of ours on them. That Cat engine lasts a long time and users are extremely happy with the longevity of that engine.

The Cat diesel drives a hydraulic powertrain through a Curtis right angle gearbox and Warner Electric clutch. Driven off the gearbox are a pair of Hydro-Gear 21 cc/rev pumps, which power Parker Hannifin hydraulic wheel motors at each of the rear wheels. The circuit also includes an external oil cooler packaged on the left side of the engine compartment.

A 15 gal. fuel tank capacity means “you can fuel it up in the morning and literally go all day,” Ferris said.

The powertrain delivers forward speeds of zero to 12 mph forward and zero to 6 mph in reverse. All of that forward speed can be effectively employed, the company said, thanks to Ferris’s patented independent suspension system that utilizes control arms with large adjustable coil-over shocks in front to minimize caster chatter, along with rear swing arms with adjustable, coil-over shocks. The result is a machine designed to cut effectively and comfortably in all types of terrain.

“Our differentiator is not the diesel power,” Ferris said. “There are other competitors out there with diesel engines from different manufacturers, and they’re good engines, they just don’t offer the same power. I think we have maybe 20% more power on comparable machines. 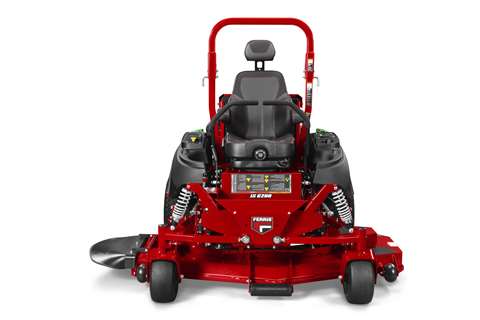 The IS 6200 mower incorporates Ferris’s patented independent suspension system that utilizes control arms with large adjustable coil-over shocks in front to minimize caster chatter, along with rear swing arms with adjustable, coil-over shocks. The result is a machine designed to cut effectively and comfortably in all types of terrain, even at higher speeds.

“All of our competitors do not have independent suspension. They have fixed-frame machines. And so even if they had all the horsepower in the world, they couldn’t put it to the ground and mow at the speeds we do all day long. The operator couldn’t take it and the machine couldn’t take it, it would just fatigue and fall apart. So having those two pieces together, the power and the suspension, is the perfect marriage for ultimate performance.”

The Ferris IS 6200 incorporates a 72 in. deck with Ferris’ innovative Cutting Deck (iCD) two-belt system that operates Hercules II spindles. The deck, which has a cutting height range of 1.5 to 6 in., is operated through a hydraulic deck lift system.

The mower has a premium high-back suspension seat with 105º foldable ROPS and steering lever controls. The operator station also includes a new 4.3 in. interactive digital display supplied by Enovation Controls of Tulsa, Okla. Based on Enovation’s PowerView 485 display platform, the system allows the operator to monitor the performance and operation of the mower, as well as keep track of information such as engine hours, engine temperature, oil pressure and voltage.

The Ferris IS 6200 includes a new 4.3 in. interactive digital display supplied by Enovation Controls of Tulsa, Okla. Based on Enovation’s PowerView 485 display platform, the system allows the operator to monitor the performance and status of the mower.

“The color display is like the color display you have on your automobiles today,” Ferris said. “It’s the command center for the machine. It controls your idle and it reads out any kind of service detail, tells you whether you’re not you’re neutral or your parking brakes are on, if your seatbelt is engaged.

The IS 6200 diesel is built at Ferris’ Sherrill manufacturing facilities and the a second round of production is set to begin shortly, the company said.