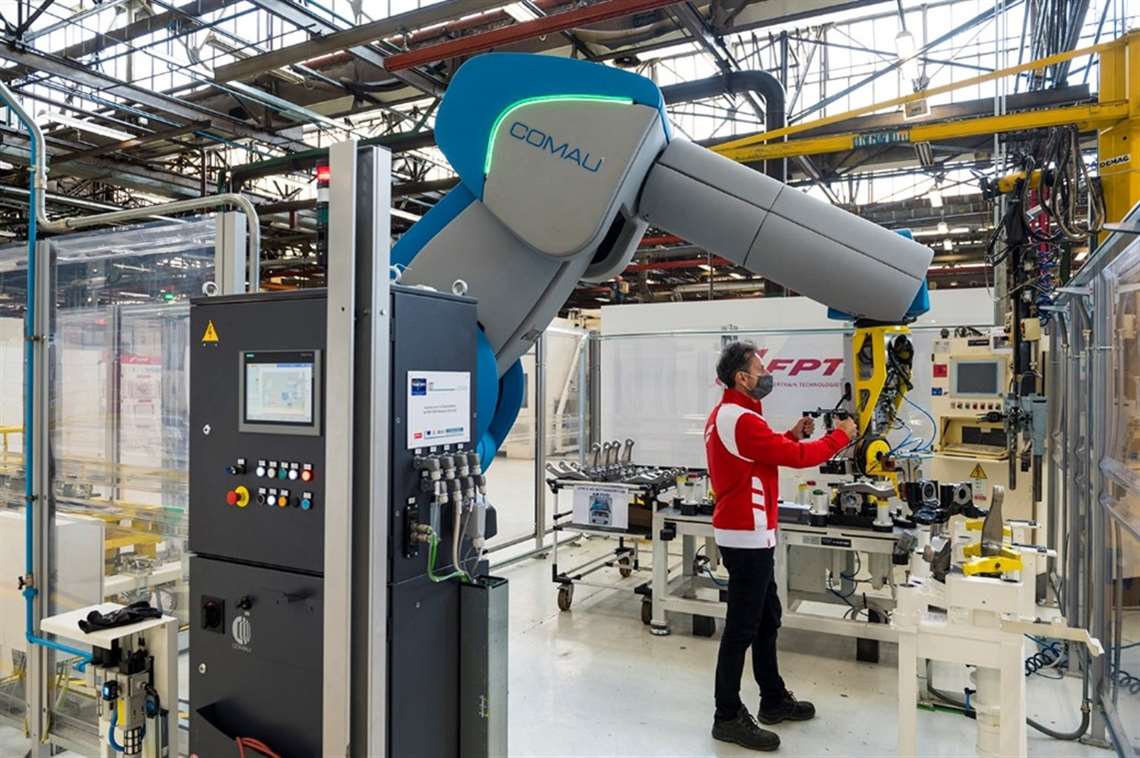 FPT Industrial  and Comau (a company of the FCA Group) have cooperated on a project for Factory 4.0 technology, following a tender called Human-centered Manufacturing System (HuManS) launched in the area of the Piedmont Region in Northern Italy, to which FPT Industrial, Comau and other 17 companies participated.

The FPT Industrial Driveline plant in Turin, Italy, dedicated to the production of transmissions and axles for heavy equipment, utilizes now a robot going by the name of Aura (Advanced Use Robotic Arm) and built by Comau.

In Italian the name sounds female, so let us say ‘she’ is operating in the department dedicated to assembling spindles for heavy equipment axles. She is a big lady, almost three meters high and weighing about three tons, and is a collaborative industrial robot capable of working alongside humans, without barriers and in the same working station. Her task is to help humans and perform the most tiring and repetitive tasks and, where necessary, she is ready to be manually guided by the human operator.

Aura retrieves a piece from the supply cart in complete autonomy and delicately hands it to the operator she shares the station with. And it is precisely the human operator who, at this point, takes control of the operations, guiding the robot using a specific handle so that the mechanical arm takes the part to the work bench, where it is coupled with a lever. The robot is capable of lifting up to 170 kg, but the delicate assembly stage is controlled by a human.

As a collaborative machine, Aura must be able to perceive a presence, whether it be other machinery or a real person, in the space where it operates and consequently modulate her behaviour. She uses “senses”, as for example a sensitive skin that allows her to decide whether to reduce its speed or stop entirely. Sight is provided by a 3D camera that the robot uses to scan the piece being retrieved in order to perceive its position. And touch is supplied by a gripper capable of lifting the component being moved with a firm, but delicate grip.

In order to work without any barriers alongside a human, Aura was also outfitted with a laser scanning system that investigates and monitors the working space when the arm is in operation.

The Humans project started in 2017 with the specific target of factory ergonomics. “We are happy to have moved this project forward with an excellent partner like Comau”, said Giuseppe Daresta, manufacturing manager for FTP Industrial. “The configuration created at the Turin Driveline plant represents significant innovation, as it improves the ergonomics in manual assembly operations of heavy elements thanks to the support of robots capable of safely sharing the spaces with the human operator. It also represents an important vehicle to spread new technologies developed thanks to their application in a real production setting.”