China’s XCMG said it has designed, developed and manufactured what it has called the “world’s largest rear-wheel drive rigid mining truck.”

The XCMG XDE440 haul truck was customized for China Minmetals Corp. by adhering to the industry standards of South America, North America, Australia and more. The company said the product “can guarantee 7300 hours of annual working hours with a potential availability rate of over 95%.” It has a load capacity of 440 tons (400 tonnes).

“In order to meet such load requirements, we have independently developed the world’s largest wheel reductor and strongest wet disc brake that can achieve traction which is equivalent to a fully seated 16-carriage China Railway High-speed train, and it will effectively ease transportation capacity restraints at mining sites,” said Xie Heping, R&D designer of XCMG’s mining machinery projects.

XCMG said its R&D team has independently tackled a number of core technologies, such as intelligent variable frequency traction, high-torque wheel hub drive, cab roll protection, anti-fatigue design of large load-bearing components and more. Further details on the engine and drivetrain have not yet been disclosed. 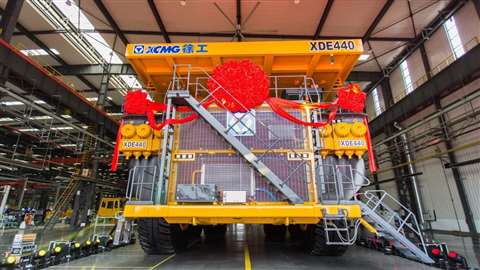 Zhang Liang, resource supply chain director of China Minmetals, noted that China Minmetals has a long-standing partnership and friendship with XCMG since the two companies signed a strategic cooperation agreement in 2011.

XCMG is working toward a full mining equipment product range covering 70 to 700 tonnage mining excavators, 30 to 440 tonnage mining dump trucks, crushing and screening machinery, graders, and more, which the company said meant it will be able to provide “global customers with the most comprehensive mining solutions with the most complete product portfolio and tonnage.”

XCMG’s mining machinery can be found in mainstream mining markets such as Africa, Australia, South America and Europe.

“In the future, XCMG will go all out to provide service guarantees throughout the product lifecycle, help our customers to maximize their value, and jointly contribute to the intelligent, safe and green development of the mining industry,” said Wang Min, chairman and CEO of XCMG.

While no one would argue that the XDE440 has a very large payload, Belarus’ Belaz might argue about which company gets credit for building the “world’s largest mining truck.” Delivered to an open-pit coal mine in Siberia in 2014, the Belaz 75710 has a capacity of 450 tons. Reportedly, three have been built.