Which trucks shone at this year’s Shell Rotella SuperRigs?

This year saw the return of an in-person annual Shell Rotella SuperRigs truck beauty competition. And Steve Sturgess explains why it is back with a bang.

One of the joys of being a truck motor noter is getting to do stuff that’s completely out of the ordinary. Like being a judge at the annual Shell Rotella SuperRigs truck beauty competition which is the basis for the following years Rotella Calendar. Each year, the venue shifts to a new truck stop location and while it was a virtual event last year, this year it was in-person and located just outside of Chicago on I-90 in late July.

Shell Rotella SuperRigs
As judges, we get no say in who gets into the calendar except for choosing the Best of Show which is guaranteed a calendar spot. We are a four-person tag team that’s been together for a dozen years. For me, it’s been a highlight of the year for something like 35 years of the event’s nearly 40-year run. 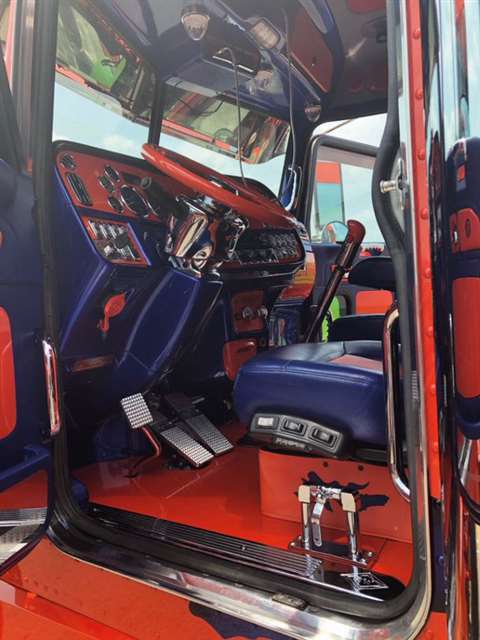 A recurring theme this year was not just the recognition of the folks who polish these glamor rigs but to recognize the job all truckers have done to keep grocery shelves stocked and incoming and outgoing commercial and retail stocks going around the country the last 18 months.

Many contestants had prepared their rigs for last year before the COVID pandemic hit so there were many low-mileage, show-quality trucks that had been sidelined in the intervening months ready for public exhibition. And what an exhibition!

Peterbilt 379
The Best of Show was a spectacular Peterbilt 379 entered by Vinnie Diorio and driven (and coddled) by driver Kiegan Nelson. Neither are strangers to the Shell Rotella SuperRigs, having entered several times with spectacular supertrucks that resulted in a Best of Show in 2015.

Over the years, the event has highlighted the best-looking and most creatively turned-out trucks in the nation and spread the word that truckers, trucks and the trucking industry do a great – and largely underappreciated – job in making our lives comfortable and our country great. And Rotella, in its enthusiastic support, has done a great service by awarding accolades to the best representatives of an industry that moves more than 80% of the freight dollar, much of it in new trucks with the greatest safety technology and the most qualified drivers on the road.

It’s not the event that carries this message – it’s these trucks as they roll down the road. When I judge, I look at the rig – how does it impress that dad, mom and two kids in the car as it rolls by? Then we award points for creativity, design originality and workmanship.

Diorio/Nelson Best of Show prize
That’s what gained Diorio/Nelson the Best of Show prize. While every truck that makes the trek to SuperRigs is outstanding, some just take your breath away for the attention to detail. Like Diorio’s signature frame preparation. He welds in the fasteners for the frame rails then grinds off the huck bolts so the rails are as smooth and polished as the rest of the bodywork. On the retro-themed 2020 Peterbilt 389 with its old-style Mercury lookalike sleeper, he carried the theme throughout the red and black Pete to perfection.

Personally, I have great admiration for Truett Novosad who showed up with four immaculate heavy haulers that get into some terrible muck when moving excavators, dozers and other construction equipment. My favorite from his stable was a Peterbilt 379 that has the cab and sleeper lowered 6 in., with suicide doors hinged at the rear instead of the front. That’s creative stuff.

While there are cash awards up to the $10,000 for Best of Show, these truckers come to get a spot on the Rotella SuperRigs calendar. For Vinnie Diorio and Kiegan Nelson, they got the best of both worlds.