Volvo Construction Equipment reported its net sales in the second quarter increased by 13% versus the same period in 2020. The company said the results reflected improved machine sales in Europe, North America and South America. 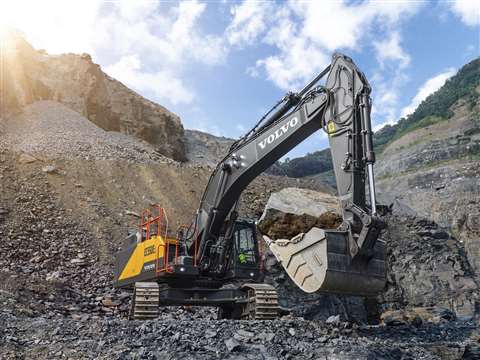 Volvo Construction Equipment reported improved second-quarter sales in nearly all of its markets outside of China.

China has seen a slight slowdown despite its initial surge of sales in the first three months of the year, the company said. With improved construction activity, high customer confidence and increased investment in infrastructure, order intake has also increased by 35%.

“Thanks to our commitment to innovation and customer success, we have offset a slowdown in China with a solid increase in demand across our other key regions of Europe and North America,” said Melker Jernberg, president of Volvo CE. “While maintaining a steady recovery from the challenges of last year remains our top priority, we have also continued our journey of innovation with a number of exciting launches this quarter, including our entry into the 50-ton excavator segment and the launch of our first dedicated Fuel Cell Test Lab.”

Total net sales in the second quarter increased by 13% amounting to SEK 25,839 million versus SEK 22,876 million in Q2 2020, which was also supported by a 17% rise in service sales, the company said. Adjusted for currency movements, net sales increased by 21%.

Sales in Asia, including China, the world’s largest construction equipment market, remained the highest but still accounted for a 12% drop, due to a decline in infrastructure investment. Asia (excluding China) continued to solidify its growth with improvements in all key markets including India, Korea and Southeast Asia. Adjusted operating income amounted to SEK 3.3 billion, up slightly from 3.1 billion, corresponding to an adjusted operating margin of 13.1% (13.6% in 2020). 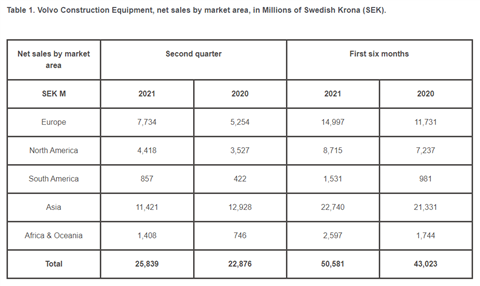 Thanks to what the company called a more confident customer outlook and increased investment across most markets, order intake increased by 35% with a significant rise in orders for Volvo-branded products and a more modest yet stable order intake in SDLG branded products, which were affected by the slowdown in the Chinese market.

Demand for large and medium sized machines remained strong and higher than for compact machines. Due in large part to higher sales in Europe and North and South America, the latter of which saw a 120% increase in deliveries from the same period last year, overall deliveries increased by 5% in Q2.

The year up to May has benefited from high customer activity across industry segments, more than positively impacted by increasing volumes in the European, North American and South American markets, Volvo said. In Europe, the majority of countries continued their recovery to see a 30% increase measured in units from the same period last year, while North America saw a 35% rise thanks to high infrastructure and housing construction activity.

The South American market enjoyed the biggest surge (71%) due to an increased demand in commodities. Despite its strong start to the year, China began to decline in Q2 in line with decreasing government investment in infrastructure. 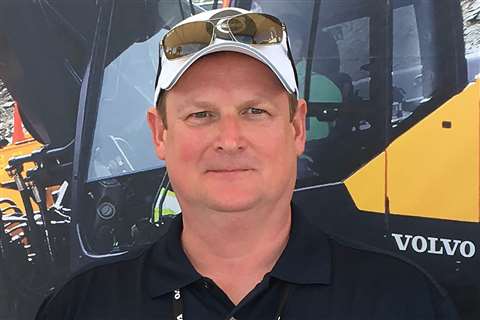