Volvo Construction Equipment (Volvo CE) said it saw a modest increase in net sales for the first quarter of 2022 in all areas outside of Asia – with its overall growth momentum impacted by the market decline in China, triggered in part by the ongoing COVID-19 restrictions there. 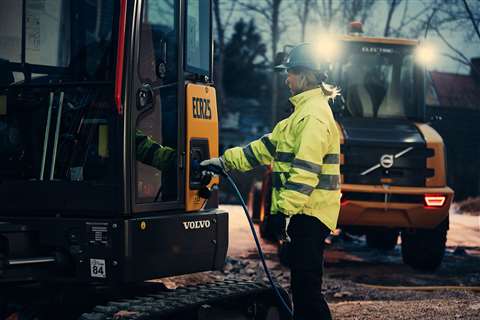 Volvo CE reported a modest increase in net sales in all areas outside China in the first quarter of 2022. (Photo: Volvo CE)

The ongoing pandemic in China has had a significant impact on sales in the construction equipment industry’s largest market in the world, the company said, leading to a drop of 9% in overall global sales for the first quarter of 2022. However, Volvo CE said all other regions have played a strong role in softening the impact by demonstrating a steady increase in sales for the first three months of the year.

South America reported the highest increase of 62%, with North America rising 11%, Africa and Oceania 5% and Europe 2%. Further illustrating the escalating importance of service solutions, service sales have also increased by 17%, the company said.

“There can be no doubt that the industry and the wider world itself is in the midst of extremely challenging times,” said Melker Jernberg, president of Volvo CE. “But I am proud that we as an organization are tackling these issues head on – supplying our customers with the products and services they need today, while focusing on the tragic humanitarian crises going on around the globe and taking action on urgent climate change. 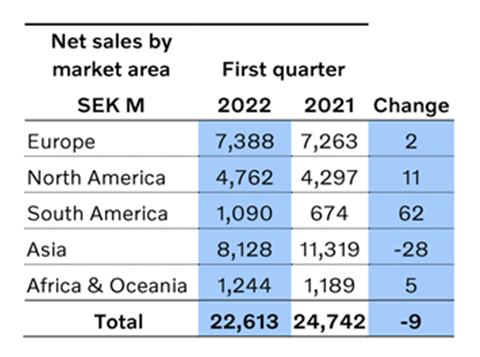 Volvo CE reported a modest increase in net sales in all areas outside China in the first quarter of 2022. (Photo: Volvo CE)

During this difficult period, we are keeping up the speed of transformation to more sustainable construction and infrastructure solutions, helping to decarbonize value chains, all the while safeguarding our communities around the world.”

During Q1 2022, Volvo CE saw net sales decrease to SEK 22,613 million from SEK 24,742 million in Q1, 2021. Adjusted operating income amounted to SEK 2,810 million versus SEK 3,822 million in Q1, 2021, corresponding to an adjusted operating margin of 12.4%, down from 15.4%. The operating income has been negatively affected by lower machine volumes and higher material costs, which were partially mitigated by improved price realization and higher service volumes, the company said.

The elevated levels of order intake from the same period last year as the world recovered somewhat from the impact of the pandemic, has meant there has been a drop in order intake for Q1, 2022 – declining by 42%. While mainly due to the continued decline in China, order intake has also felt the effect of a cancellation of orders in Russia and restrictive order slotting due to large order books. Effects from a strained supply chain have also led to deliveries decreasing by 33%.

The European market grew by 13% in the first two months of the year, influenced by a large number of investments in infrastructure and housing, while North America increased by 20% thanks to the high levels of housing construction and manufacturing in the region. Due to the strong demand for commodities, South America has continued its robust rise in market demand with a 45% increase on the same quarter last year. However, all of this has been affected by a 33% decline in the Chinese market, primarily due to a spike in COVID-19 cases that has led to restrictions and lockdowns across the country, but also due to a price pressure that remains primarily on excavators. Asia outside of China has also been negatively impacted by price increases on machines in India, related to new emission regulations, and has reported an 8% fall. 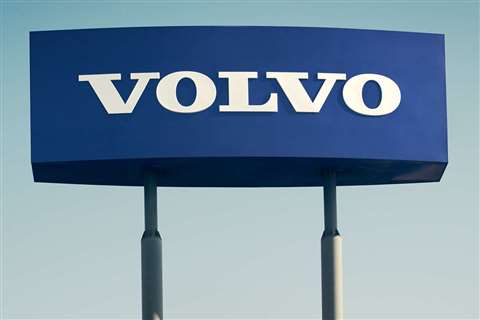 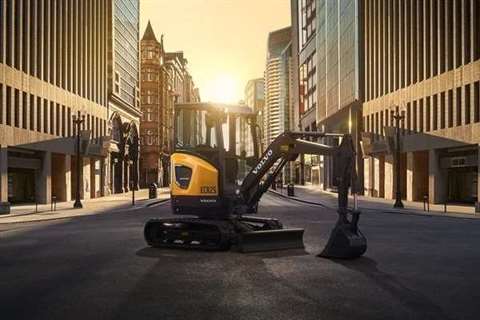