When Briggs & Stratton launched its Vanguard Commercial battery line in late 2019 the company targeted a range of applications, many of which it was already familiar with after more than 100 years of experience in small gasoline engines.

But recently an intriguing application is taking Vanguard into new territory, namely the world of mobile hydraulics.

Vanguard Commercial batteries have been selected by Terzo Power Systems to drive its Hydrapulse electrohydraulic pump system. A clean-sheet, intelligent technology, Hydrapulse aims to enable the electrification of fluid power systems such as steering and coolant pumps, air compressors, hydraulic power units and auxiliary systems in a broad range of mobile and stationary applications.

Mike Terzo, CEO and founder of California-based Terzo Power Systems, said, “Right now the mobile industry is probably the biggest thing going on with electrification. Everything is, in some form or fashion, being electrified. Not just electric vehicles, but all aspects and components of these systems.

“I founded the company specifically to address fluid power challenges and hydraulic challenges on equipment – what we call, electrifying fluid power.”

Hydrapulse has been designed for industrial and mobile applications
Available in three frame sizes, the Hydrapulse system is a two-section design, consisting of a drive side and a pump side. The drive side includes a permanent magnet motor, motor drive circuitry, sensors, and control circuitry and logic.

The pump side incorporates a base, a hydraulic pump and inlet and outlet ports. Customers can choose a standard pump from the company or can use any properly sized hydraulic pump with the appropriate output shaft and mounting flange.

The unit can also be specified with an integral reservoir or mounted to the customer’s reservoir and the drive and pump sides can be completely disconnected to allow troubleshooting or maintenance of either assembly.

The Hydrapulse system is also available in a steering pump configuration, in two frame sizes, for applications in medium- and heavy-duty trucks and buses, off-highway equipment (including autonomous agricultural vehicles), trailer and tag axle steering systems and hybrid and electric vehicles.

Terzo added, “Describing what the Hydrapulse is has always been our challenge. We try to explain to people that it’s not just a pump or a motor, it’s a different category in hydraulics. Traditionally everything has been discrete, individual components – whether it is a motor, a pump, a valve or hose.

“The Hydrapulse is a complete system. It is also an enabling technology for electrification on anything that has fluid power. Whether that is a power unit sitting in an industrial factory stamping out car bodies, or the hydraulics on an excavator, the Hydrapulse enables the electrification of these applications.”

Vanguard’s commercial batteries offer versatility
A key aspect for the Hydrapulse system is the energy source, particularly with the broad range of power requirements between the power unit and steering pump configurations. Vanguard Commercial’s batteries are modular, enabling them to meet the specific power demands of each unit.

Terzo explained, “We’ve worked with most of the battery suppliers in the industry. Vanguard did their homework, and they did it right. It’s just plug and play for us. You get it, you plug it in, and it works. 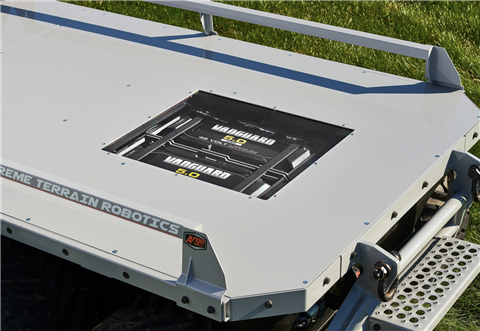 “The Vanguard battery’s modularity allows us to scale to our electrical needs, so it is just simple to integrate. Integration is the whole ticket to the OEMs. If they cannot integrate it into their platform, they are not going to use it, so integration is really king.

“Anything that makes integration easier for the OEMs and keeps them moving is going to make us more successful. Vanguard on the low voltage side has done a really good job, so that’s what we’re running with.”

Terzo Power is one of the newest users of Vanguard Commercial batteries but Vanguard also needed to continue to satisfy ARGO, one of their original customers.

An Argo engineer, during a visit to Vanguard to discuss engines, mentioned they were looking for a lithium-ion battery for the then-new J8 platform. That conversation occurred just as Vanguard was beginning its lithium-ion battery development, and so a collaboration was born.

Development process to straighten out any serviceability issues
Now in regular production, there are approximately 30 ARGO J8 units powered by Vanguard batteries in the field. The 20kWh battery pack, consisting of four 5kWh batteries, along with a battery management system, power a pair of electric motors that drive a two-speed transmission that gives the eight-wheeled vehicle a maximum speed of 18.6mph (30km/h) and a payload capacity of 1250lbs (570 kg). 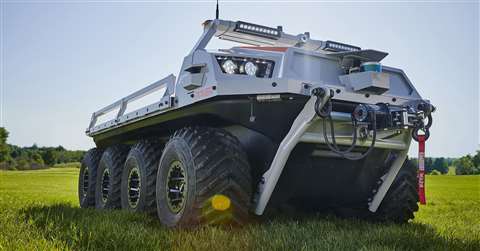 David Overholt, product team manager-program/validation at ARGO, a division of Canada-based Ontario Drive & Gear Ltd, said, “It was really nice going through the development process together.

“Because we were a part of the decision-making process we have a more intimate knowledge of the system powering our vehicle, and that was a huge advantage for us when dealing with end-users.”

Built to be flexible, up to four of the battery packs can be paralleled at a time to meet varying power requirements. The vehicle also incorporates two customizable CANbus networks that integrate with legacy systems, and a pre-qualified and plug-in ready sharing system can be mounted on or off-board.

Overholt added, “It’s plug and play, because it’s all built into the system. We can pull information through the CANbus to get updates to our controlling computer. The ease of integration was really a major design factor.

“Serviceability of the battery was a necessity. We cannot have a system where you lose only part of it, and you have completely lost the ability to operate the vehicle.”