Dr. Reinhard Grandke, the long-serving Chief Executive Officer (CEO) of the DLG (German Agricultural Society), has announced his decision to leave the DLG on September 30 to pursue new professional challenges and projects.

To enable a seamless succession, Dr. Grandke notified DLG President Hubertus Paetow and the Chair of the Supervisory Board Carl-Albrecht Bartmer about his plans in advance. At DLG’s main committee meeting on September 5, the president and chair will propse that Dr. Lothar Hövelmann and Freya von Czettritz take on new dual management roles, in close cooperation with DLG’s president and the Board of Directors. 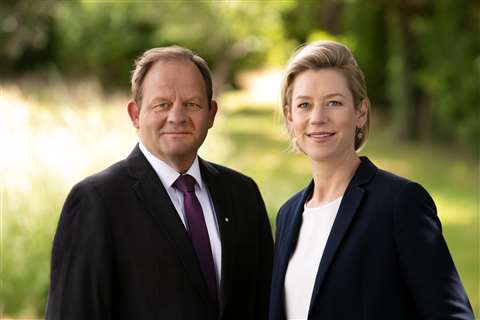 Dr. Lothar Hövelmann, in addition to his responsibilities as managing director of Competence Center Agriculture, will be appointed CEO of the DLG e.V.

Freya von Czettritz will be appointed CEO of the DLG-Holding GmbH and will be responsible for the business activities of the group. A successor taking on the current responsibilities of von Czettritz will be identified shortly. Until then, she will continue her duties as division manager und project manager of Agritechnica, the international farm machinery show that takes place in Hanover, Germany.

“Dr. Grandke has significantly shaped the DLG for more than 24 years,” said Carl-Albrecht Bartmer, Chair of DLG’s Supervisory Board. “With high personal commitment, profound professional knowledge and enthusiasm coupled with business acumen, he has driven the DLG in a positive direction and, together with DLG’s experts and members, he has successfully designed its strategic path and positioning. We regret his decision and wish him all the best for the future.”

“Through his efforts, Dr. Grandke has developed the DLG professionally and has expanded its businesses,” said DLG President Hubertus Paetow. “This enabled us to come through the corona pandemic in good shape and has put us in an excellent position for the future. The exhibitions, congresses, conferences and food tests that are taking place again will allow the DLG both to return to normality and to take advantage of opportunities that are now emerging.”

With a degree in business administration, von Czettritz joined the DLG in 2008 and since 2009 has been responsible for Agritechnica. Since 2016 she lead DLG’s Division of Trade Fairs Plant Production and Field Operations with the international brands Agritechnica, DLG Feldtage, DLG Waldtage, PotatoEurope and Agritechnica Asia.

Hövelmann began his career with an agricultural apprenticeship which was followed by a degree in agricultural sciences majoring in crop production at the University of Bonn. He joined DLG in 1998 as project manager for crop production five years later he was appointed head of the Sustainable Agriculture Department. In 2008, he assumed the position of managing director of Competence Center Agriculture and in 2015 was appointed to DLG’s Board of Directors.