Trendlines: Backhoes - Down But Not Out 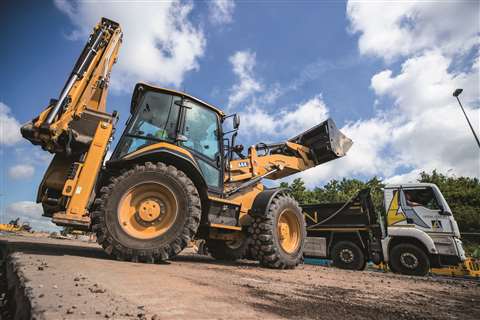 The backhoe loader is “here to stay” as its versatility allows it to be used in a variety of construction, industrial and agricultural applications. (Photo: Zeppelin Cat)

There has been a lot on our plates the last couple of years. COVID-19 swept the global economy from a position of strength and efficiency and brought it to its knees. Then came the Omicron variant, which proved to be the least damaging but most contagious strain thus far. Next came Russia’s invasion of Ukraine. On top of that was piled COVID-inflated housing and financial turmoil as the Federal Reserve raised interest rates and tightened its monetary policy, in a slowing economy no less. Higher rates may hinder demand, but it won’t address any of today’s supply chain issues.

Construction activity, measured by housing starts and permits, has been relatively high since the onset of COVID. We’re seeing housing start levels that were last realized before the last housing market crash, so many are calling today’s market a bubble. Higher interest rates will cool this off somewhat and signs of the switch from a seller’s market to a buyer’s market is beginning to be realized.

Nonetheless, building activity is strong for now and there is no indication that the market will be derailed. This should keep machinery markets intact and in demand, so long as the economy can keep its footing.

One machine that has been around for decades of the up-and-down housing market is the backhoe loader. As you probably already know, the backhoe loader was first introduced by JCB’s founder, Joseph Cyril Bamford, who invented an extraordinary machine that was not only equipped with a loader, but also an excavating arm on the opposite end for digging. The advent of this remarkable machine made it possible to kill two birds with one stone. Why purchase multiple machines when you could buy one that does a variety of jobsite tasks?

One fact remains for the backhoe – it’s here to stay as its versatility allows it to be used in a variety of construction, industrial and agricultural applications, including building, material handling, demolition, site preparation, road construction and utility work. The ability to handle these multiple applications has also made the machine a favorite of government fleets and it is often the one indispensable piece of machinery for municipalities.

For many years, the backhoe was one of the best-selling pieces of construction machinery before experiencing a long period of decline, beginning in the late 2000s. More recently, however, interest in the backhoe has picked up, and sales have recovered some ground, but its days of sales exceeding 20,000 units per year are likely to stay behind us. While it was a revolutionary machine at the time, the backhoe has since been replaced by the combination of a compact track loader (CTL) or skid-steer loader and a mini-excavator, so the lifecycle has gone full circle.

As I’ve said many times, the health of the machinery markets depends almost entirely on the health of the economy. As is the case with a good portion of the earthmoving machinery I watch each year, I’m looking for modest sales gains for backhoes, with sales in the mid- to high single digit range for 2022. That could be improved if the ongoing supply chain issues begin to abate, which seems unlikely.

Regardless of whether economic conditions improve or weaken, there will always be a spot for the backhoe loader in the marketplace. Hats off to you, Mr. Bamford.

The backhoe loader leaders
Three companies dominate the backhoe loader market: Deere, Caterpillar and CNH Industrial (with its Case and New Holland brands). Each one of these suppliers routinely sells over 2500 units every year. They collectively account for nearly 80% of sales in North America, with Deere leading the pack with about a third of the market and just outpacing Case and Caterpillar’s share, each representing about a quarter of annual sales.
Kubota has steadily been the fourth leading supplier. Going back more than a decade, this Japan-based OEM is the only other company consistently selling over 1000 units per year and, in 2021, Kubota ended up selling enough backhoes for approximately 15% of the market. Kubota entered the North American market two decades ago in 2002 with unit sales of 375 machines, which was subsequently tripled in a matter of years.
While the playing field is limited for backhoe loaders, the remaining suppliers sell fewer than 1000 units annually. JCB and New Holland are worth highlighting as they both command a respectable market presence, as well, with each accounting for between 300 and 700 units.

Backhoe loaders: Increased productivity, lower fuel use
With fuel consumption declining and productivity increasing, this segment could get more admirers in the future