The Changing Face of CNH 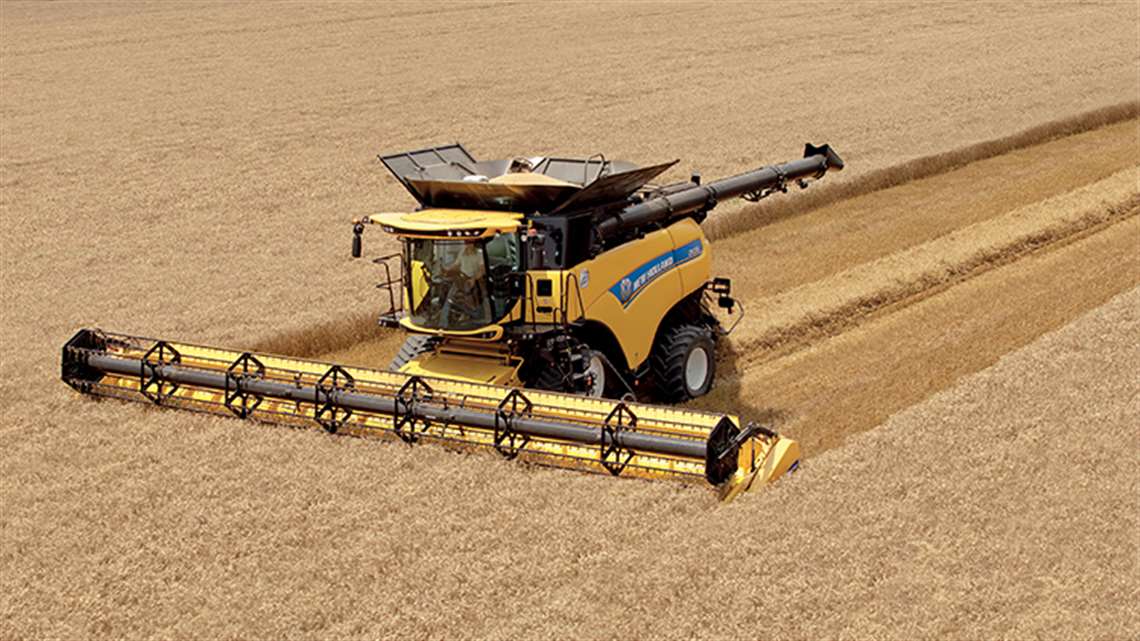 CEO Hubertus Mühlhäuser talks about the Nikola JV, multiple acquisitions and re-evaluating the future of propulsion

(On March 23rd, CNH announced it had begun a search for a new CEO following the departure of Hubertus Mühlhäuser).

It has been a turbulent couple of years for CNH Industrial. Beginning with the resignation of chief executive officer Richard Tobin early in 2018 and followed by the tragic death of the company’s well known and charismatic chairman, Sergio Marchionne, in July 2018.

In the months that followed, the global manufacturer of agricultural, construction and specialty equipment, as well as trucks, buses and engines, has implemented a new organizational structure. The company has also made a number of acquisitions and other investments and has taken, and is taking, steps to position itself for whatever the future of power is in both the on-highway and off-highway markets.

Soon after Marchionne’s passing, Susan Heywood was named chairman of CNH Industrial. Shortly after that, Hubertus M. Mühlhäuser was appointed chief executive officer. Mühlhäuser joined CNH Industrial from Welbilt Inc. and had previously been with AGCO where he oversaw the company’s EMEA and Asia regions as well as its global engine business.

Heywood and Mühlhäuser were named executive directors of the company in late 2018. A series of other senior leadership changes followed from there as new management teams were assembled.

In September, CNH Industrial announced another major strategic step during its Capital Markets Day: the company plans to separate its Off-Highway (agriculture, construction, and specialty segments) and On-Highway (commercial vehicles and powertrains) businesses.

At the same time, CNH Industrial announced a $250 million investment into Nikola Corp. gaining access to the well-publicized start-up’s battery and hydrogen fuel cell technology for commercial vehicles. CNH Industrial also made a series of smaller acquisitions and deals, mostly on the agricultural machinery side, but also made investments in electrification, methane and clean diesel technologies.

In a wide-ranging interview, Mühlhäuser talked with Diesel Progress about the many changes over the last 18 months or so, what else CNH Industrial might be considering, as well as the future of propulsion both on-highway and off-road.

It is a unique perspective from a company that is a major manufacturer of both on-highway and off-highway equipment, plus has a multi-billion dollar engine and powertrain operation.

On Splitting CNH Industrial Into On-Highway And Off-Highway

Mühlhäuser: Looking at the portfolio composition with a strategic lens, we concluded that while the megatrends of digitalization,

automation, electrification, servitization are impacting each of our segments, their impact is different for the on- and off-highway businesses.

First, we found different market attractiveness with very different competitive dynamics for the on- versus the off-highway business. For example, the regulatory environment for ag and construction versus the highly regulated, highly competitive on-highway markets. That means you need a distinct and differentiated management approach for each business.

Second, there are very limited synergies between the on- and off-highway worlds. Again, they are disrupted by the same trends: connectivity, automation and the challenges of propulsion. But to automate a truck is a very different thing than to automate a combine or a tractor. We found limited or no synergies on the distribution, engineering, and manufacturing side, though there are obviously synergies on the procurement and the administration sides.

However, when we then looked at those synergies within the on- and off-highway segments, we saw that there was an overwhelming synergistic potential between agriculture and construction equipment as well as between commercial vehicles and powertrain, given that the majority of our engines go in on-highway applications.

Third, we looked at our business from an investor angle. We currently get a substantial conglomerate discount, just by multiplying the profits of our segments with peer multiples and looking at our current market capitalization. Also, the capital markets’ preference is clearly for focused business models and companies, so-called pure plays. Hence, we decided to create two focused businesses, leaders in their respective fields, and get a more appropriate valuation for each of them.

Mühlhäuser: We really want to grow and outgrow the industry. We’re predicting a 5% sales CAGR by investing over $13 billion in R&D by 2024 – mainly in digitalization, automation, low-/zero-emission propulsion and servitization. Some of the growth will be organic, some of it through acquisitions.

The Nikola partnership is just one example of a smart investment that will put us in a position to gain market share. In the ag sector, we have acquired three companies. AgDNA, which is a farm software company, K Line Ag, an Australian implement manufacturer and ATI, a rubber track company.

We have also announced a partnership with Microvast which will enable us to design and assemble battery packs in-house. And there’s more to come.

Mühlhäuser: Zero-emission long-haul transport is becoming a reality. We took a $250 million strategic stake in Nikola with the goal of accelerating the production of their zero-emission fuel-cell and battery electric heavy-duty trucks. Through this partnership, we are bringing the first fuel cell heavy truck to the market. We expect to achieve zero emissions within two years through the collaboration.

Nikola has the drivetrain sketched out, they have the battery and the hydrogen fuel cell technology. What they lack are the bones and skeleton of a truck. For this reason, their investors strongly encouraged them to talk to an old economy truck manufacturer like us to partner.

We are a natural fit for two reasons: first, we have already disrupted the market in Europe with LNG trucks (with LNG as a segue into

hydrogen) and second, we are not yet competing in the U.S. We will help them with our world class manufacturing and engineering knowhow.

(Since our interview Nikola and CNH announced the partnership’s first jointly developed truck: the battery electric Nikola Tre, is based on the new Iveco S-Way heavy-duty truck platform and integrates Nikola’s proprietary technology, controls and infotainment. Testing is expected to begin in mid-2020, with prototypes showcased at the IAA 2020 commercial vehicle exhibition in Hannover, Germany this September.)

We decided to host the production of the Nikola Tre battery electric and fuel-cell electric heavy-duty truck models in our Iveco facility in Ulm, Baden-Württemberg, Germany, since this area is striving to become a leading hub for fuel-cell mobility. Start of production is anticipated within the first quarter of 2021, with deliveries of the Nikola Tre beginning in the same year.

Mühlhäuser: With ATI it was more of a buy versus make decision. For K Line it’s just a good product. They have a very, very good product which they focus right now just on Australia, and we see real potential globally.

AgDNA follows on a partnership that gave Case IH owners access to AgDNA’s AI-enabled technology platform. With that, we will combine capabilities to develop a farm management information software.

As we said, we’re going to grow organically and inorganically. Organically with new technology solutions like biogas tractors in markets where we have not yet offered them through our multi brands, and inorganically, by taking positions in companies. There’s still tons of opportunity.

Mühlhäuser: Agriculture has become a fast-paced innovation space with new ideas and companies emerging every day. We needed to have a different modus operandi working with those innovator and disruptors. Thus, we launched AgXtend which is our incubator aftermarket brand for innovation technologies allowing farmers to enhance their efficiency and profitability. The brand is based on an open approach to innovation, working with best in class startups, ag technology companies and tech from other industries. We invite promising startups to sell their products and services under our brand name. For them it is a unique opportunity because as small startups, they now have access to our sales channels and they get global exposure enabling the targeted development of initial concepts into fully realized solutions.

We identify new solutions with our field teams, make some money on those companies and, more importantly, we may become an equity partner. If we consider a technology, we would rather do a project by project integration into Case IH or New Holland or Steyr, rather than integrating the entire company. Currently, we have now more than a half dozen companies under our roof and we’re adding at least one every quarter.

The AgXtend portfolio tries to provide the best sensing and control solutions across soil, environment, machine sensing, implement control and plant and crop. One of our startups is killing weeds with electricity. Not mechanical, not with chemicals, but electricity. So completely sustainable. And these are solutions that work, so we can sell to retail, the aftermarket. Whatever is a good solution for our end-customers will be get a chance.

The new smart solutions and connecting technologies offer new opportunities for traditional manufactures. Thus, it’s no surprise that companies like John Deere and us are tapping into a software-as-a-service business model to add to the core business of selling machinery. It’s a great time to be doing this and it’s going to be a time of big industry changes.

The Future of Propulsion

Mühlhäuser: We are in an era of tightening emission rules and raised awareness of climate change that demand alternative solutions and we offer a wide portfolio of alternative propulsion systems which include compressed and liquified natural gas (CNG and LNG). Our industry is changing and natural and biogas will eventually build the bridge to full electrification. But this change won’t happen overnight. We are at the intermediate stage right now. In Europe, we are selling decent quantities of LNG trucks. The market today is in the thousands and growing rapidly.

We foresee the percentage of total industry volume for LNG trucks in Europe to go from 2% today, to 10%, 15%, perhaps even 20%.

The current LNG infrastructure for trucks can later be upgraded to a hydrogen infrastructure, as it has many similar components. That’s why legislators in Europe right now are fairly supportive of natural gas as an alternative to diesel, because it’s the only readily available technology with a sufficient supply infrastructure that provides you with CO2 reductions of at least 10 or 15%.

Off-highway it is a little different: we are pushing CNG right now predominantly in tractors and wheel loaders with other equipment to follow.

The reason for that is that, in the same engine configuration, you can replace natural gas with biogas. Biogas can take 80 to 100% of the CO2 out. If you take the biomass from liquid manure, you are actually decarbonizing the environment. This might become a business model for farmers, as you are starting to see prices for a gram of CO2.

Another benefit of gas over diesel: running cost savings over the lifetime of equipment of around 30 to 35%.

As diesel engines are facing increasing emissions regulations and challenges, it’s our responsibility to develop solutions not only for an era that may follow diesel, but also for the years of transition that lie ahead. Is there one killer application? No. It’s going to be a series of different propulsion solutions and alternatives.