The Beauty Of Yachting, In Cannes 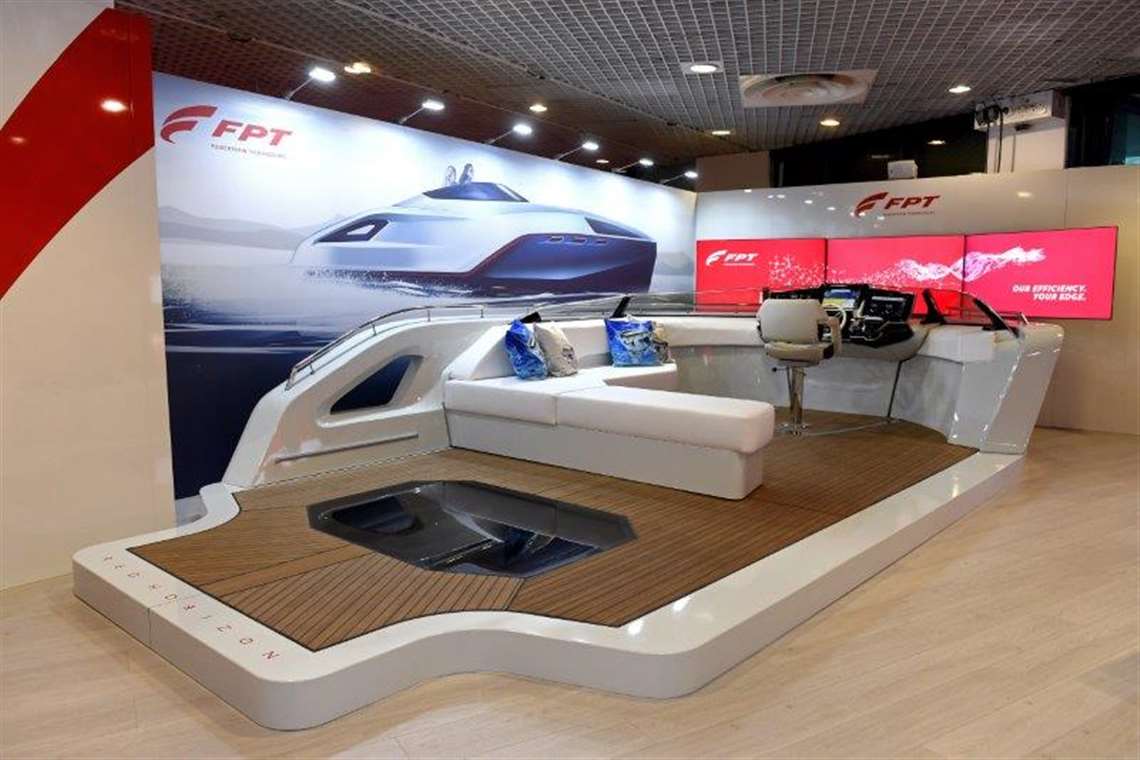 Here are some impressions from the show; mostly from exhibitors located indoor, I must admit. The outside area was really hard to ‘navigate’ given the adverse weather conditions.

The Red Horizon concept was on display at the FPT Industrial booth and featured two N67 570 EVO engines by FPT, electronic and maneuvering system controls by ZF, seven-inch Simrad displays by Navico for engine monitoring and a 16-inch Full HD Multi-Function Display (MFD) again by Navico.

The electronic Premium Control by ZF with ergonomic lever and touchpad integrates the latest in Controller Area Network (CAN bus) communication technology with a multifunction command head for up to six vessel control stations. the additional Premium joystick controls engines, transmissions and thrusters at the same time.

The Navico displays offer easy and intuitive touchscreen controls and are equipped with a technology that grants a clear view under any lighting conditions and ultra-wide viewing angles. The compact 7-inch displays series have been fully customized for FPT and are specifically dedicated to display a wide range of engine data and alarm monitoring.

Red Horizon by FPT Industrial gives visibility and control from the helm and offers a chartplotter navigation system with a built-in GPS receiver, sonar support, radar, autopilot and other options. It also provides wireless display mirroring on smartphones and tablets, allowing engine and boat control from any place on board. Fabio Rigon, vice president FPT Industrial Europe, said that Red Horizon will be available from the next season.

Volvo Penta said, it has taken a full systems approach and worked closely with Fountaine-Pajot to understand customer usage patterns of the complete boat. The electric prototype is based on Fountaine-Pajot’s extensive customer usage database, which accurately defines drive cycles for a wide range of user profiles.
The technology behind Saildrive is based on the electromobility designs by Volvo Group with many shared components. Li-ion battery packs power an electric motor, which drives the Saildrive propeller. The system offers more power and torque at low speeds compared to a similar diesel engine.
The Electronic Vessel Control 2 (EVC2) system by Volvo-Penta has been adapted for a Saildrive application and features latest controls and a new driver interface that manages navigation and battery monitoring.
The electric propulsion (2×15 kW) grants a range of about 27 nautic miles at 5 knots and 17 nautic miles at 6 knots; top speed of 8 knots can be exploited for maximum one  hour. Two batteries deliver 20 kWh each and can be recharged in three hours. The Lucia 40 electric catamaran can moor for up to 12 hours relying on battery power, including the operation of air conditioning.
Volvo Penta also supplied its Easy Connect system for the 94-foot superyacht D’aria by Amer Yachts. Easy Connect provides users with data related to the engine, boat, and routes taken, directly to their smartphone or tablet. The App, available since 2018 for iOS, is now available for Android devices and for D1 and D2 Volvo engines.

The Italy-based gen-set manufacturer presented a hybrid system with inboard or outboard electric motors by an Italian partner (from 10 to 40 kW output power), water-cooled inverter, instrumental control panel, control levers, lithium batteries, fast charger and Mase’s VS (variable-speed) diesel gen-set as range extender. The gen-set ensures that the batteries are kept at optimum levels by limiting the acceleration consumption peaks and thus drastically reducing consumption and emissions. The use of the diesel engine is not continuous, but functional to the charge of the accumulators.

The new VS – Variable Speed gen-set series by Mase was launched last year and has been now expanded with the VS 15.5 model from 15 kW.

Rolls-Royce launched new MTU propulsion systems and bridge solutions for yachts. Propulsion systems with MTU series 4000 engines and compliant with IMO Tier 3 emissions regulations are already available for delivery, while from 2021 the series 2000 engines will be available too, with power outputs from 1270 to 1940 kW.

The new 80-metre Bilgin 263 yacht is fitted with IMO 3 propulsion systems from MTU and will reach a top speed of 20 knots thanks to two 16-cylinder Series 4000 engines and two SCR systems. Turkey-based Bilgin has commissioned Rolls-Royce to deliver IMO 3 compliant MTU propulsion systems for a total of three yachts of this kind.
Starting in 2020, Rolls-Royce will launch completely integrated and modular MTU hybrid marine propulsion systems for production yachts onto the market covering a power range of between 1000 and 4000 kW per powertrain. The introduction of the first yacht built by British luxury yacht manufacturer Sunseeker International fitted with an MTU series production hybrid system is already scheduled in the near future.
Rolls-Royce also announced it will be opening a new Yacht Competence Centre in La Spezia (Italy), in October 2019.