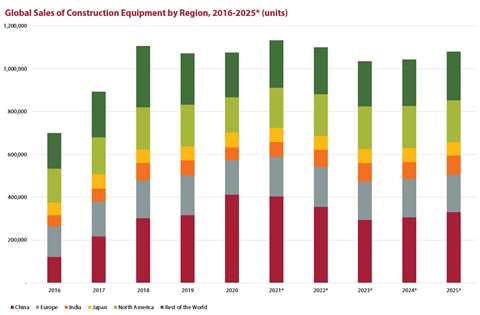 Global construction equipment sales are expected to reach 1.13 million units this year, some 2% higher than the previous record of 1.11 million machines, which was achieved in 2018. This is the key finding from Off-Highway Research, following the completion of a mid-year update to its forecasts.

“The global rebound in equipment sales over the last six to nine months has been striking,” said Chris Sleight, Off-Highway Research managing director. “While this is excellent news, the industry still faces many challenges in meeting this demand, including supply chain constraints and bottlenecks around shipping and other logistics.

“I believe that without these, sales this year might have been even higher than the record volumes we are predicting. However, the positive in this is that the current buoyancy should extend well into 2022 as a result.”

This peak in sales was not forecast prior to the COVID pandemic. It has come about due to the stimulus response to the virus by governments around the world, most significantly in China.

A program of special bond issues by provincial governments in 2020 to raise funds for infrastructure spending and other stimulus saw the Chinese market rise 30%. That growth continued in to the first quarter of 2021, but the Chinese market has slowed since. A 2% decline in sales is expected for the year as a whole as a result, but volumes in China will remain at a very high level in historic terms.

While China is slowing and performing slightly worse than previously expected the rebound in many other parts of the world is proving more robust than was anticipated at the start of this year. The European market is projected to rise 15% in 2021, as opposed to the previous forecast of single-digit growth. This should see volumes rebound to similar levels to the cyclical high which was seen in 2019.

Likewise, the forecast for North America has been upgraded to a 13% increase. While this will not see it regain the highs of 2019, these levels should be reached and surpassed in the following years, OHR said.

A modest 1% rise in construction equipment sales is now forecast for Japan in 2021, as opposed to the previous expectation of a downturn. This rise will build on the modest increase in sales which was seen in 2020 as the government increased spending on public works. This will take the market to its highest since the early 2010s, when a combination of stimulus measures and the reconstruction following the 2011 earthquake and tsunami drove a sharp rise in equipment demand.

However, the forecast for India has been downgraded from the previously expected 15% increase to an 11% rise in sales this year, compared to the low seen in 2020. This is due to the second wave of Covid infections which swept through the country in the second quarter of 2021.

The outlook for the rest of the world remains unchanged, with the expectation of a 6% rise in sales this year.

A more detailed analysis of the global equipment markets from Off-Highway Research will be included in the Forecast 2022 section of the September issue of Diesel Progress.