Powering the ‘most powerful tidal turbine in the world’

In  2021, renewable energy technology company Orbital Marine Power launched what it called the “most powerful tidal turbine in the world.” Orbital O2 is a floating tidal stream turbine that will initially generate electricity from the waters on the Orkney coast of Scotland. The 74 m vessel was designed to harness tidal energy to provide electricity onland. 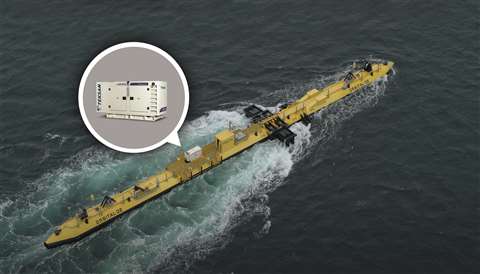 Orbital O2 is a floating tidal stream turbine that will initially generate electricity from the waters on the Orkney coast of Scotland.

According to the company, tidal turbines generate more thrust power than wind as water is 835 times denser than air. O2’s twin 1 MW power nacelles reach deep into the water at the end of retractable leg structures. The 10 m composite blades give the vessel more than 600m2 of swept area to capture tidal energy and generate the power to run 2000 households. The floating structure is kept in place through mooring system and electricity is transferred via a cable along the seabed the shore.

Sitting on the tidal turbine’s deck is a Teksan TJ15PE 400v ac generator set powered by a Perkins 403A-15G1 diesel engine designed to provide power to the vessel itself. The gen-set specialist said it made some alterations and improvements to ensure its durability amid seawater and other environmental conditions.

Teksan products information
“Teksan has a wide range of products that fulfill all kinds of energy needs,” said Anıl Üstün, regional director for the Americas, Teksan, USA. “Our products are custom-made for projects reflecting our expertise and operate seamlessly even in the most challenging conditions, regardless of whether it is the freezing cold of the North Pole, the summit of a very high mountain, or the middle of a vast sea. In addition to harsh terrain and climate conditions, it has high performance also in the face of the devastating impacts of natural disasters.”

The company initially plans to offer this range of products to the U.S.:

Products bearing the Teksan brand are used in sectors such as health, finance, construction and infrastructure, telecommunications, data centers and agriculture.

Liverpool Football Club
For example, its systems supporting the Zackenberg Research Station in northeastern Greenland, The Fort Resort hotel, situated at an altitude of over 7000 ft. in Nepal; Raiking Hospital, one of the largest in Thailand; and Anfield Stadium in England, which has a 54,000 seat capacity and is host to the Liverpool Football Club.

Teksan hybrid generators, which were developed by Teksan in its R&D Center, are offered in in several different models with Deutz or Perkins diesel engines and AGM or lithium-ion batteries.

Teksan-branded hybrid generators are used by Total E&P on floating oil platforms in the North Sea.

“By installing our hybrid generators, the platform’s fuel consumption and refueling period dropped by 40% and the periodic maintenance frequency dropped by 80%,” said Üstün. “All energy needs of the platform are met by the solar panels used in the design of the project. The products provide a significant savings in fuel, supply and maintenance costs owing to their efficiency.”

The company manufacturers its products in Turkey at two plants with a gen-set capacity of more than 15,000 annually. The company said it also plants to carry out final production in the U.S., “in order to provide its customers in the US market with the fastest support.”