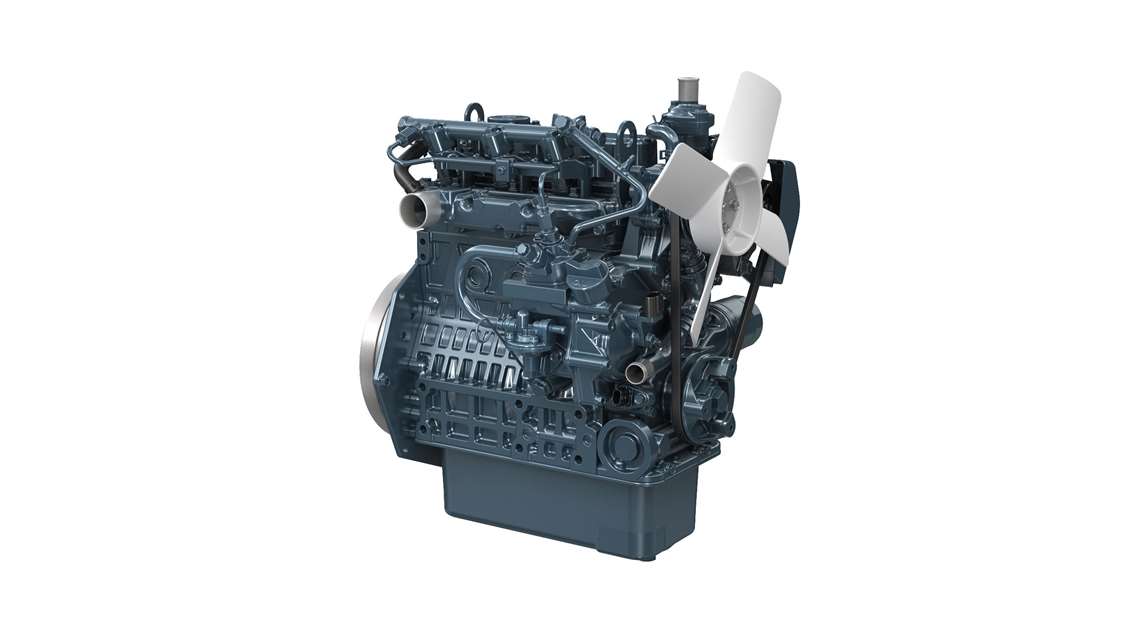 Over the last two years Kubota, best known for its expertise in small diesel engines, pushed the top end of its diesel engine line to unprecedented new heights of first 200 hp, and then last year, 300 hp. Now the company has announced a major development at the other end of its range by taking the wraps off its smallest electronically controlled diesel engine ever.

“We’ve been progressing for a number of years on starting to establish the brand of Kubota in the higher capacity and higher displacement sector,” said Daniel Grant, manager, marketing intelligence for the Kubota engine business unit in Europe. “And definitely, the perception may be that we’ve focused a lot of effort on our 200 hp and 300 hp offerings.

“But we never lost sight of our legacy markets and the engineering teams and the product development teams have not forgotten or neglected our other important series.”

The D902-K is Kubota’s first small displacement diesel engine to incorporate full electronic control and the new Kubota-designed TVCR combustion system equipped with what the company called a one-of-a-kind common rail system that delivers a 5% increase in fuel economy over the mechanically controlled D902.

“When you talk about common rail fuel injection systems, it is normally regarded as a medium- to large-size engine technology, and it is pretty much the industry standard now,” said Grant. “Trying to condense that into what is a very, very small engine architecture takes a considerable amount of redesign, particularly around the cylinder head. So the combustion and fuel system have been bespoke designed to suit that engine architecture without compromising in terms of durability, reliability and performance.”

The TVCR and the common rail technology also enables the D902-K to meet EU Stage 5 and U.S. EPA Tier 4 final exhaust emissions regulations without requiring aftertreatment, the company said, along with the China 4 non-road standards scheduled to go into effect next year and the Class 3 rules regulating black smoke emissions in urban environments and low-emissions zones that was implemented in China in 2018.

“It’s a challenge for any engine manufacturer to minimize visible smoke practically down to zero,” said Grant. “But it’s even more of a challenge with smaller compact engines and the type of products in which they are used.

“So part of the overall scope of development was to bring a product to market that could satisfy that Class 3 regulation, that satisfy China 4 and EPA and Stage 5 and do it with the objective to make sure the engine architecture itself is not altered.”

Designed as a drop-in

That objective was met, as the D902-K has the same external dimensions, intake and exhaust positions, engine mount mounting positions and PTOs as the mechanical D902. That allows it to be a virtual drop-in for a broad range of machines, including aerial work platforms and access equipment, compact wheel loaders and mini excavators, and it is also suitable for hybrid applications, the company said.

The other benefit to the electronic control is that it utilizes CAN communications protocols, which provides acquisition of engine data and adjustment of operating parameters in real-time, as well as enabling such things as telematics, Grant said.

“The K series will bring something extra to the market for those customers that are looking to bring more digitalization, maybe also telemetry and maybe also various other sorts of digital services to their products,” he said.

Mass production of the D902-K is scheduled to begin in 2022 at Kubota’s engine plant in Japan.​  For more information on the Kubota website, click here.

Kubota Engines ConExpo Highlights
One of the highlights on the Kubota stand at ConExpo is the company’s S7509, a high power density, 300 hp, large displacement