Harvesting technology developed by a professor, extension agent for OSU Extension Service could reduce cost of harvesting fresh blueberries by thousands of dollars.

“This is a huge step forward for the industry,” Yang said. “It’s a breakthrough for moving away from hand labor to machine harvesting fresh blueberries. There’s nothing else like it.” 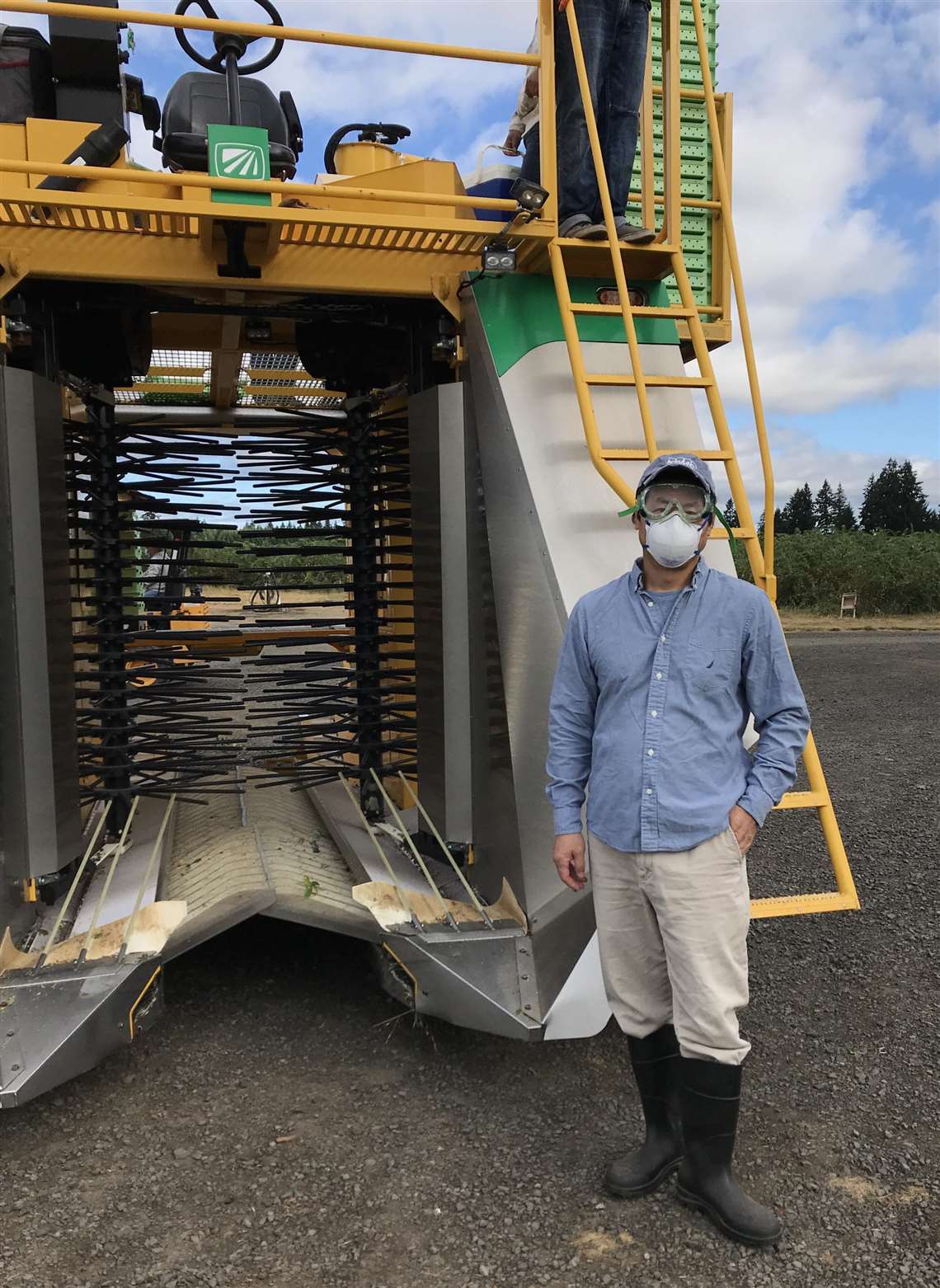 Wei Qiang Yang stands next to an Oxbo Intl. blueberry harvester that has been modified with a soft catch system for harvesting fresh blueberries. Photo by Sarah Doane.

The “soft catch system” has a soft surface for catching the delicate berries in contrast to the hard polycarbonate surface of traditional over-the-row machines (OTR), which have been used to harvest blueberries for processing – not fresh market – for 30 years.

Most machine-harvested blueberries go to processors to be made into jams and other products. A fresh-market crop, however, needs gentle handling to keep berries from bruising. Yang’s invention reportedly catches the fruit, so the berries are in good shape for shipping to stores.

Oregon and Washington produce more blueberries than anywhere in the world, with Oregon harvesting 150 million pounds annually, which pencils out to be more than $120 million in farm gate value. Yang said Oregon has the highest yield per acre in the world because the climate and soil conditions of the Willamette Valley are perfect for growing berries.

Yang, who is based at OSU’s North Willamette Research and Extension Center, works with Willamette Valley growers and they feel the high cost of hand-harvesting blueberries. Competition with the nursery and housing industries and a lack of workers generally means fewer workers, leading to fewer berries picked during harvest. Sometimes, Yang said, a grower may need 200 pickers, but can only hire half a crew.

When the laborers work on large farms, they can hand-harvest millions of pounds a season, which translates into huge expenses at a rate of 50-85 cents per pound of high-quality blueberries for the fresh market.

“Machine-harvested fruits with the soft catch system will have similar quality as hand-picked fruits,” Yang said. “Therefore, the cost of picking fresh quality blueberries will be reduced by more than 70%, which will reduce the amount of hand labor and increase the profitability and competitiveness of blueberry farms in Pacific Northwest.”

At $250,000, Yang’s machine is only affordable for large growers, but the system could be retrofitted for older OTR harvesters.

Of the four soft catch prototypes that have been made, three were obtained by Oregon growers for on-farm trials. Yang said he continues to fine-tune the soft catch system, most importantly making the surfaces easier to clean and disinfect than traditional OTR machines.

“Equally important in a global marketplace is to produce safe and high-quality fruit that maintains its freshness from picking to eating,” Yang said. “The berries must be free of pathogens that can affect human health.”

To be successful in the marketplace, the soft catch system also needs to gather blueberries that are of the size and quality of hand-picked berries. During packing, the blueberries go through a sorting machine that rejects off-colored, bruised, damaged or fruit smaller than the U.S. Department of Agriculture requires. If they aren’t acceptable, that’s a loss for the grower.

The magic number is 75% of the harvest making it through sorting, Yang said. When that happens, the soft catch system gains even more traction in the blueberry and farm equipment industries. Already, innovative growers have started to embrace the soft catch technology, Yang said.

Future plans include field days in southern Oregon and the Willamette Valley to demonstrate the technology and solicit grower and packer feedback. He also said he plans to write an extension publication on machine harvesting for fresh-market berries.

“Improving profitability will in turn help preserve these high-value industries and the rural economies and livelihoods in which they are based,” Yang said.