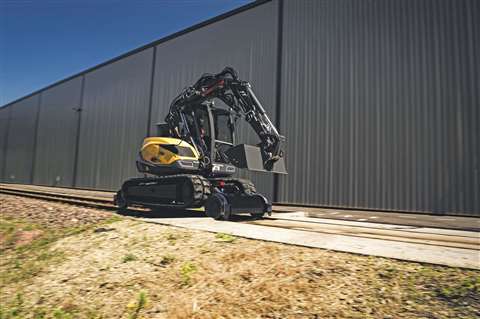 The 106MRail has the ability to drive on and off rails by lowering or raising the integrated rail gear. (Photo: Mecalac)

Mecalac’s 106MRail compact dedicated rail excavator offers North American customers an agile, nimble solution with the ability to drive on and off rails by lowering or raising the integrated rail gear. Based on the company’s MCR crawler skid excavator concept, the 10-ton tracked excavator is suited for light to medium applications as well as tunnels and confined spaces for urban railways, subways and tramways, the company noted.

The 106MRail is powered by a Tier 4 Final diesel engine rated 75 hp at 2300 rpm and 221 lbf. maximum torque at 1600 rpm. For fuel savings, automatic low idle switches the engine to low idle after a preset amount of time. Engine rpm is resumed with a move of the machine control.

The compact model can be used for a variety of maintenance tasks, such as fine grading, working with ballast and ditch cleaning. It has a lift capacity of 1212 lb. at its maximum lift height of 10 ft. and can travel at up to 6.2 mph on the ground or up to 14.3 mph on rails. When the machine is on the rails, it can reach 7 ft. from the center of the machine and lift up to 6000 lb. with the arm at 90 degrees. 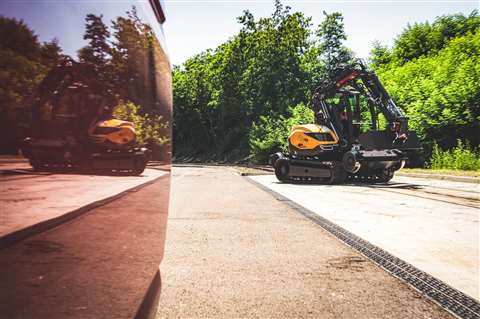 Based on the company’s MCR crawler skid excavator concept, the 10-ton tracked excavator is suited for light to medium applications. (Photo: Mecalac)

The articulated two-piece boom enables operators working in confined tunnels to position tools exactly where they are needed. They can also work on tasks along the tracks while positioned on the rails. When maximum compactness is required, the boom can be tucked in against the machine.

“By incorporating a 106MRail, railways can transform how they work,” said Peter Bigwood, general manager of Mecalac North America. “They no longer have to maneuver a large, cumbersome machine for lighter tasks, such as unloading and spreading ballast.

“The goal of this machine,” he continued, “is to give railways the quality performance and versatility they are searching for in a smaller machine. The 106MRail eliminates the need to run a large machine at a high cost for light applications, allowing railways to optimize their fleets.” 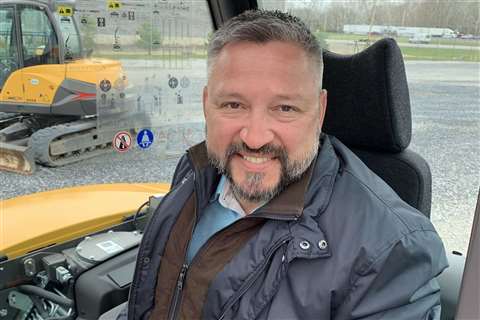