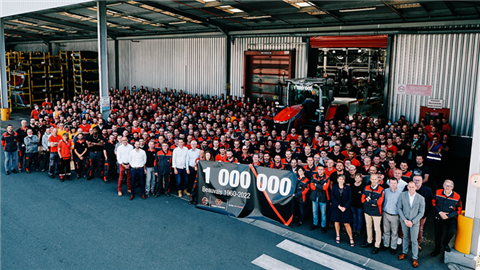 The AGCO team at the Massey Ferguson Beauvais plant celebrates the production of its one-millionth tractor on June 13, 2022. Photo: AGCO

AGCO Corp. recently celebrated the production of the one-millionth tractor at its Massey Ferguson Beauvais plant, a milestone that just so happens to coincide with the company’s 175th anniversary. Massey Ferguson has been manufacturing tractors in Beauvais, France, since November 20, 1960.

“2022 is a year of milestone celebrations for Massey Ferguson,” said Darren Parker, vice president of Massey Ferguson, North America. “We applaud the hard work and dedication of our colleagues in Beauvais to produce our one-millionth tractor. We’re also excited to celebrate Massey Ferguson’s 175 years of straightforward, dependable equipment innovation this year. These dual milestones prove our status as agricultural problem solvers dedicated to providing the right equipment, at the right price, for individual farming operations. Our equipment, just like our customers, is Born to Farm.” 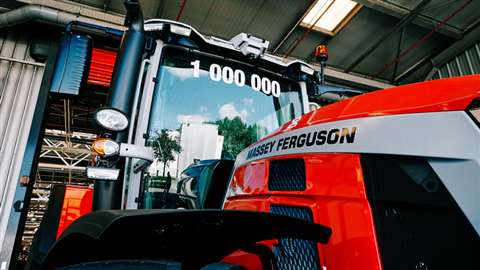 62 years of production in Beauvais

“On behalf of all our employees and dealers, I want to thank our customers for their steadfast trust,” said Lhotte. The new 8S adds to Aubrée’s expanding Massey Ferguson fleet that already includes four tractors, three combines, and two large balers.

Boussad Bouaouli, vice president, manufacturing Beauvais, emphasized employee commitment on the Beauvais MF campus development. “From 1960, there have always been people who kept the site moving, always with the right farmer-first focus to address challenges of the times and, above all, with a clear view to the future,” Bouaouli said.

It all started with the MF 825 in 1960. From then, the site grew continuously, producing iconic tractors driven by innovation, including:

“The Beauvais plant and our dedicated employees embody Massy Ferguson’s commitment to farmer-focused equipment solutions. This plant, named Factory of the Year 2016, represents the modern era of Massey Ferguson. This campus sets our future and new standards,” Bouaouli said.

The site has evolved over the years, including the implementation of lean manufacturing practices, expansion of the Beauvais 2 cab assembly line and a logistics center, and a tractor customization workshop. The facility produces many of the brand’s tractors, including the MF 4700 M, MF 5700 M, MF 5S, MF 6S, MF 7S, MF 8S and MF 8700 S Series. Up to 100 tractors can be produced and shipped daily to dealers in more than 70 countries.

“As we hand over this one-millionth tractor, we are set to unify our sites into a single MF Campus with all our departments under one roof,” Lhotte said. “This offers high flexibility and leverages the unique experiences, skills and commitment of the people who work here. This tractor milestone is our 2500 employees’ success, including our GIMA transmissions’ joint venture.”

GIMA designs and manufactures transmissions and axles. The joint venture started in 1994 between Massey Ferguson and Renault Agriculture (now part of Claas) and has been a major component supplier to both parent companies.