Earlier in 2022, the two companies had signed an agreement to produce Liquified Natural Gas (LNG) trucks in India for the local market. And recently Blue Energy launched its first LNG-fueled trucks rolling off production in its Chakan plant, Pune, India. The vehicles are 55-ton heavy-duty truck (similar to the 44-ton vehicles in Europe) powered by FPT N67 NG engines compliant with BS6 (Bharat Stage Emission Standards). 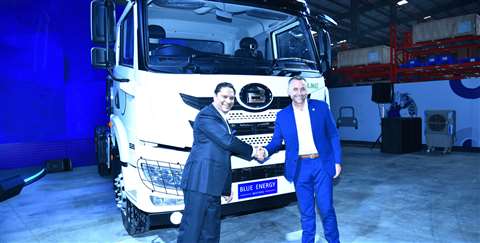 The FPT N67 NG engine is a six-cylinder in line configuration with 6.7-L displacement and fixed geometry turbocharger with wastegate valve. It delivers a maximum power output of 206 kW at 2000 r/min and 1000 Nm torque at 1250 r/min.

FPT said, the engine is the most powerful natural gas unit on the market and compatible with CNG, LNG and biomethane fuel; the N67 NG uses stoichiometric combustion to assure best-in-class fuel consumption and lower noise than diesel engines, with up to 40% fuel expense reduction versus diesel equivalents in the Indian market and 28% less CO2 emissions.

The company’s vision for LNG truck production involves partnerships with world-class suppliers such as FPT Industrial; the trucks feature Meritor axles and Eaton transmissions, among others.

According to Bhuwalka two aspects of the Indian economy make it an attractive market for LNG trucks: “First of all, there are 3.5 million heavy-duty trucks driving on Indian highways, emitting 450-million-ton CO2 annually.” That is a big problem to be addressed and Bhuwalka thinks the only mature and versatile technology available now is LNG. “LNG-fueled vehicles dramatically reduce pollution but also offer game-changing operating costs, which are a key proposition in India where buying decisions are much driven by total cost of ownership. This technology will help in the transition period to full decarbonization.”

The second aspect is that in India electrification is taking center stage for many industries including automotive, but the market of heavy-duty trucks is just not ready for the adoption of full electric solutions yet. “Blue Energy Motors believe in a blended solution that has to consider infrastructure development too,” commented Bhuwalka. “We are partnering with a company that installs LNG fuelling stations. It might sound very surprising, but it has been calculated that the whole of India highway network can be serviced with 30 fuelling stations for heavy-duty trucks. In fact, our trucks will feature a 1000-L LNG tank, giving the vehicle a great autonomy.”

Bhuwalka added though that more than 1 000 LNG stations are being planned by different companies, in order to meet demand from the automotive market. “India is moving fast to become a gas-based economy in the transition to complete zero emissions.”

Even though these trucks will primarily cover the Indian market to start with, Bhuwalka admits that there are 28 countries in the world which have potential for exporting these LNG trucks (thanks also to the very demanding emissions standards in India), so some exporting activity is not ruled out in the future.

In terms of productivity, Bhuwalka explained the quite interesting model on which Blue Energy Motors’ manufacturing is based: the micro-factory model. “According to this model, we can open a 10 000-truck manufacturing facility in record time anywhere in the world.” The first factory has been opened in Pune with an annual manufacturing capacity of 10 000 vehicles and currently employs 60 people.

Even the approach to market of Blue Energy Motors is pretty distinctive: the company has no dealers and all its sales are direct. Also, all service centers are owned by the company.

“We want to position ourselves as the Apple of trucking: we do engineering, design, supply chain, procurement, integration, financing, and service. What we do not is value-added manufacturing.”

On the possible hiccups of a strategy based completely on external suppliers, especially in the current situation of components shortages and delays in delivery, Bhuwalka explained that India is currently clocking its highest numbers for automotive sales in every vehicle category: 3.5 million cars per year and 15 million two-wheelers, for example. “This led to a massive localization in India of the whole suppliers’ base, which means the problems related to supply bottlenecks are less than what other areas of the world are experiencing.

Sylvain Blaise, President Iveco Group Powertrain Business Unit, commented to DPi on the partnership between FPT Industrial and Blue Energy Motors: “This agreement is of the utmost importance for FPT Industrial, now and in the future, as we want our leading technologies to play a key role to support the ecological transition in one of the world’s largest vehicle markets.”

Blaise has been appointed President in July 2021 and he admitted this time at the helm of the company has been a challenging one, especially for what concerns disruptions in the supplier chain. “We start to see signs of improvement, but it is too early to see if time for concern is over,” he said. “Among the many challenges like sky-rocketing costs of raw materials and energy, this has been a very interesting time indeed from an operational point of view.”

“Despite these boundary circumstances, FPT Industrial is strongly engaged on its path to carbon emissions reduction and proceeding with the planned implementation. This includes the development of a complete range of e-powertrain solutions and the opening of the new plant for the production of batteries, central drives and electric axles at the company’s headquarter in Turin, Italy.”

The new ePowertrain plant in Turin assembles the eBS 37 battery pack with 37-kWh capacity - a lithium-ion, water-cooled battery developed by Microvast for light-duty commercial vehicles and minibuses. From 2023, the plant is expected to assemble also the eBS 69 battery type for buses, a unit that will be installed in the Iveco Crossway Low Entry Electric bus.

Also produced in the ePowertrain plant is the electric central drive eCD 140, suitable for minibuses and light-duty trucks up to 8 ton GVW. Featuring one electric motor delivering 140 kW peak power and 1600 Nm peak torque, this component will be adopted by the new Iveco Daily Electric van.

Finally, the ePowertrain plant will deliver the electric axle eAX 840-R that has been designed for the Nikola Tre BEV heavy-duty truck, already on the market in the USA. It features two electric motors delivering peak power of 840 kW and peak wheel torque of 45 000 Nm and is suitable for heavy-duty commercial vehicles up to 44 ton GVW.

Regarding the company’s strong commitment to gas-fuelled engine solutions, Blaise commented that gas as a fuel as always been in FPT Industrial’s DNA: “We have worked on gas-fueled engines for the past 20 years at least. Gas is a strong asset in our product portfolio, and we believe internal combustion engine will still be a key part on the global decarbonization path.”

“We see the future of internal combustion engines as flexible multi-fuel units that will help in the transition to other new technologies, which for now are moving at very different introduction paces,” he added. “Leveraging on our know-how in gas combustion will also be key to the transition to hydrogen when the time will be ready.”