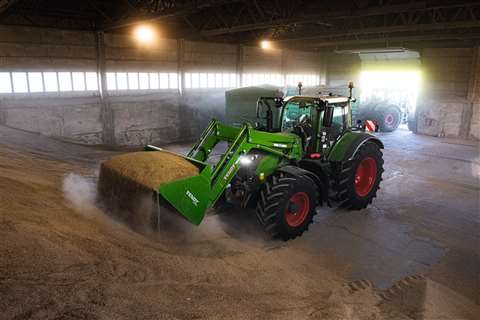 The Fendt 700 Vario series of tractors, now in its seventh generation, has been popular for loader work. (Photo: AGCO)

During an-person and virtual event hosted Germany held August 26, AGCO introduced several new Fendt machines for the global agricultural market. Notable among them, especially because of the diesel engines the company sourced, is the seventh generation of its popular Fendt 700 Vario series tractor and a new 847 hp forage harvester.

The latest Fendt 700 Vario series tractors will be available in North America, and the company said it gets a more efficient powertrain with VarioDrive transmission and Fendt iD low engine speed technology.

“AGCO has always focused on providing customer-first solutions, and the Fendt 700 Vario series delivers on that promise. With a combination of key upgrades and new features, these tractors are the perfect combination of strength, agility, functionality, and comfort, making them ideal for everything from haying and livestock work to heavy-duty field or fleet operations,” said David Soliday, senior tactical marketing manager for Fendt tractors.

Since its launch in 1998, the Fendt 700 Vario has reportedly been Fendt’s best-selling series. The company said customers rely on the tractors in arable farming, grassland, on the road or in front loader applications in Europe, North America, South Africa, Australia and New Zealand. 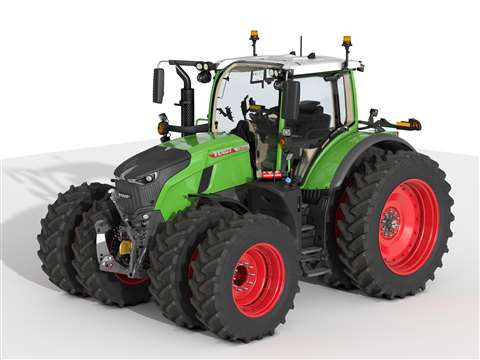 In its seventh generation, the new range has five models (Fendt 720 Vario, 722 Vario, 724 Vario, 726 Vario and Fendt 728 Vario) in the power range from 203 to 283 hp (147 - 206 kW). The Fendt DynamicPerformance (DP) extra power concept releases up to 20 hp of extra power in the Fendt 728 Vario DP via a demand-dependent control system precisely when it is needed, said the company, meaning the top model thus achieves a maximum performance of up to 303 hp.

The new tractors use a new AGCO Power 7.5 L diesel engine equipped with the Fendt iD low engine speed concept already found on larger Fendt models such as the 1000 series. The company said the engine, transmission, hydraulics and cooling system, were designed for high torque even at low engine speeds to ensure high tractive power and acceleration strength with lower fuel consumption and extended service life.

The single-range Fendt VarioDrive transmission provides a seamless operating experience from 65 ft. per hour to 33 mph. VarioDrive is Fendt’s latest evolution of the Vario CVT and provides intelligently controlled all-wheel drive management. The drive train eliminates the need for manual switching when changing between field and road operations, and it drives the front and rear axles as needed and distributes the power dynamically. In the field, full tractive force is available, said the company, and stresses are avoided when driving on roads or curves. The “pull-in-turn” effect pulls the machine into the curve during turns, resulting in a particularly small turning radius with full tractive power and less soil compaction.

The Concentric Air System (CAS) cooling concept has been designed for low engine speeds, compact construction and fuel efficiency. Less drive power is needed compared to conventional fan and cooling systems, and this power is then available for traction in the field or on the road. The CAS concept is driven by its own hydraulic motor and is decoupled from the engine speed. The system is automated according to demand and is extremely quiet and smooth.

“Delivering impressive power through innovative engineering was a focal point when designing and developing the new Fendt 700 Vario series,” Soliday said. “By combining a new engine with innovative technology such as the Fendt iD and VarioDrive, operators can enjoy even greater versatility with this new generation.”

The new generation tractor is operated via the multifunction joystick and the 3L joystick in FendtONE. The Fendt 700 Vario is equipped with a 10 in. digital dashboard and a 12 in. terminal on the armrest as standard. An additional retractable 12 in. terminal in the headliner is available as an option.

With an optional hydraulic pump capacity of up to 58 gpm, the Fendt 700 series allows the operator to accomplish tasks more efficiently, said the company. As with all other Fendt series, the hydraulic system is completely independent and self-contained from other tractor functions such as the transmission, steering valves, and cooling fan. These hydraulic capabilities improve efficiency and accuracy and eliminate the risk of cross-contamination. In addition, the series now allows for full use of up to five rear and two front hydraulic remotes even when equipped with a Cargo or CargoProfi loader.

The VarioGrip tire pressure regulation system already offered on larger Fendt series is now an optional feature on the new Fendt 700 series. VarioGrip allows operators to increase the contact area with the ground and boost tractive power by up to 8%. When driving on the road, the air pressure can be raised, providing a better ride and improving tire longevity. The driver can easily set and control the system’s tire pressure in the tractor display.

The seven-generation 700 will be available alongside the sixth-generation model as it covers a lower horsepower range 144 to 237 hp as remains popular for rear- or front-mounted hay tool applications and loader work. 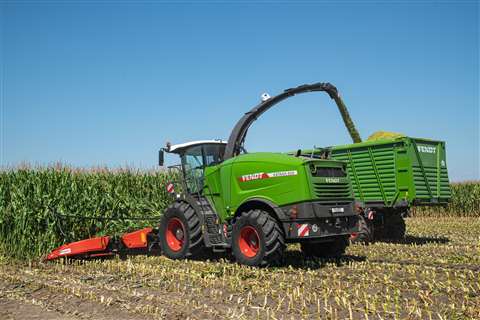 With the Katana 850, Fendt has returned to the 800-plus horsepower forage harvester market. (Photo: AGCO)

The engine is matched to the requirements of a forage harvester in terms of its torque characteristics and features by particularly low maintenance costs, helping to keep cost of operation in check, said the company. When the full power of the forage harvester isn’t required, it can be operated in fuel-saving Eco Mode. In Eco Mode, the usual running speed of the chopping cylinder is maintained at reduced engine speed. 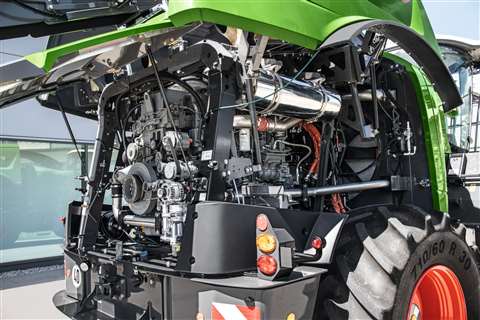 The new Fendt Katana 850 forage harvester gets its power from a Liebherr diesel engine. (Photo: AGCO)

The company said design of the engine as fitted to the Fendt Katana makes it possible to work fuel-efficiently, in both full-load and partial-load operation. The in-line 6 cylinder design saves weight and space compared to competitive models.

As an option, the Fendt Katana 850, like the currently available Katana 650, has a reversible fan with variable fan blade pitch technology fan. The pitch of the individual fan blades can be adjusted as required. This means that the exact cooling capacity is always achieved, nothing more, nothing less. If the full cooling capacity is not required, the power saved at the fan is fed into the rest of the machine. The reversing function on the fan cleans the cooling package of debris and fine dust. The automatic control of this function relieves stress on the driver, said the company.

As with the Fendt Katana 650, the intelligent all-wheel drive system Fendt BalancedGrip is also available as an option for the Katana 850.

For customers outside of North America, the Fendt Katana 850 can be ordered now and will be delivered for the 2023 season.

Fendt has locations in Germany in Marktoberdorf, Asbach-Bäumenheim, Hohenmölsen, Feucht and Wolfenbüttel. The company eemploys around 6500 people in research and development, sales and marketing, and production, service and administration.