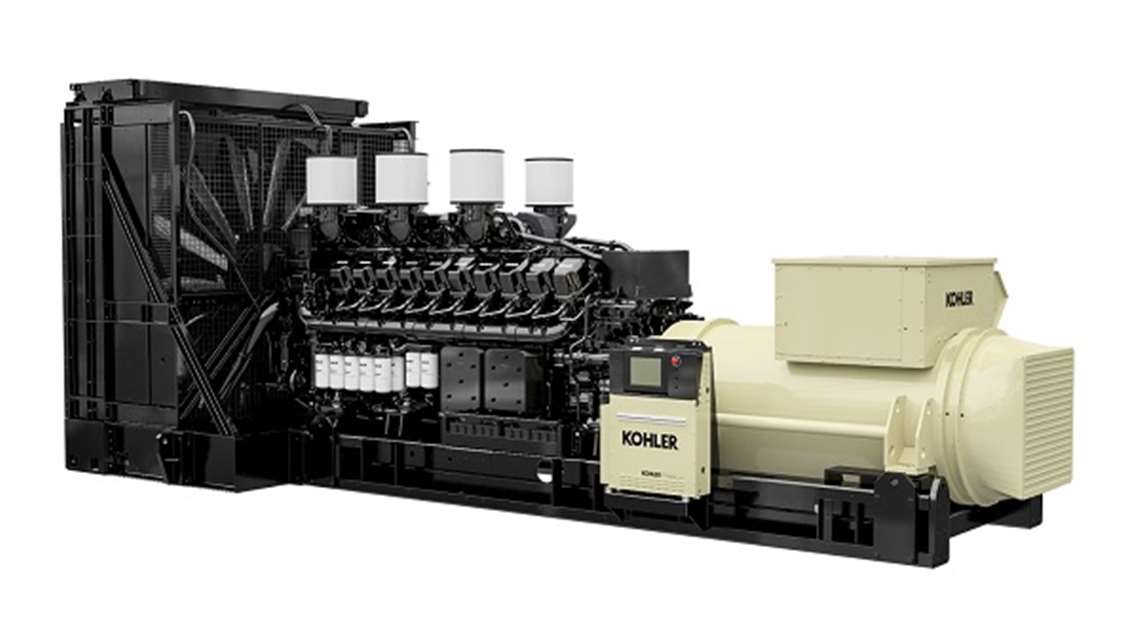 A power journey that began more than four years ago is coming to completion in a very big way.

“This launch really executes on the final vision we had for this product line when we rolled it out,” said Brad Meissner, product manager at Kohler, who was part of the engineering team for the initial KD Series launch. “It’s the largest generator we’ve had and the largest and most power-dense standby generator in the market.

“There are others out there at 4 MW, but when you add their mechanical cooling package, they’re really closer to 3900 kW. Kohler maintains the full 4000 kW rating. The KD4000, despite its full power, is not the largest physically, which translates to power density.”

Engine Features
The Kohler engines are designed and built in Colmar, France by Liebherr Components division. The two family-owned companies formed a strategic agreement in 2010 through which Liebherr developed the K175 and K135 diesels for Kohler’s generator applications in 12-, 16- and 20-cylinder configurations.

The engines also include a closed-loop regeneration crankcase ventilation system and a rigid engine block, crankcase and sub-frame contributes to reduced noise and vibration.

Built In France
The two new generator sets are built at the Kohler-SDMO facility in Brest, France.

“From an engine side, we’re moving from a V16 for the KD3250 to a V20 engine for the KD3500 and KD4000,” said Joshua Ziebert, principal engineer for the KD Series gen-sets at Kohler. “But from a design perspective, we tried to keep everything as much the same as possible. The control system is the same, the alternators, the cooling system – it’s all the same design philosophy, just slightly larger to cover those 3500 and 4000 kW nodes.”

In this case “slightly larger” isn’t much of an exaggeration as the 3500 and 4000 kW units are only 22 in. longer than the 3250 gen-set, with the other dimensions remaining the same.

“We really worked to keep the package size as consistent to today’s 3250, as that makes integration a lot easier,” said Ziebert. “Really the only difference that we look at between the 3250, 3500 or 4 MW is in the length, which is less than a two-foot addition to the total package size.”

The gen-sets are available with either of two Kohler NFPA 110 Level 1-capable controllers, the APM802 or APM603, both of which are designed to provide a range of control, monitoring and diagnostic measurements that can be expressed in English or metric units.

The new APM603 controller has a 7 in. touch screen display and incorporates an integrated voltage regulator with +/-0.25% regulation, built-in alternator thermal overload protection and UL-listed overcurrent protection. It can be used to parallel as many as eight generator sets (with APM603 controllers) on an isolated bus with first-on logic, load synchronizer, kW and kVAR loadsharing and relay protection. It also supports Modbusr RTU, Modbusr TCP, SNMP and BACnetr communications.

“The APM802 has been the controller used on the KD Series to this point and it’s a fantastic controller that is very user-friendly, with a large color touchscreen,” said Meissner. “The APM603 is our newest controller that adds superior capability for paralleling.”

Like all of the KD units, the new gen-sets will be available in 60 and 50 Hz versions and will be sold globally by Kohler and Kohler-SDMO.