Boonville facility will be company’s second in Missouri.

The quantity of Kawasaki gasoline engines special-built for lawn, garden and industrial applications is expected to get a boost next summer when a new production facility opens in Boonville, Mo., to help meet the demands of its customers. 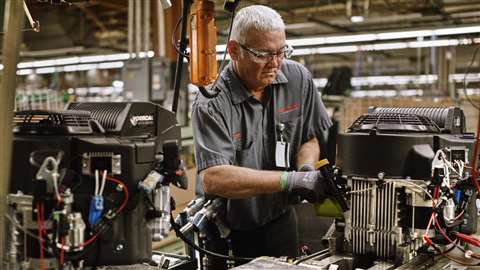 The announcement was made by officials of Kawasaki Motors Manufacturing Corp., U.S.A. (KMM) during a grand opening ceremony held at the facility, where they were joined by additional Kawasaki leadership, representatives from the governor’s office, and other local government offices.

The Boonville plant represents the company’s second location in Missouri, joining the Maryville operations which were established in 1989.

This will add to the total statewide staff of nearly 1200 based at the Maryville plant, which produces 18 different engine models ranging from 14.5 to 38.5 hp. Slated to begin production in summer 2022, the Boonville facility is currently being retrofitted and is expected to include approximately 250 employees when.

“This expansion of production capabilities for our engines is a significant step forward in our continuing ability to provide superior quality engines in the quantities needed to meet expanding market demand,” said Nelson Wilner, vice president of Kawasaki Engines Division.