Some of John Deere’s most modern marine diesel engines are being used to power some of the most ancient-looking vessels plying the Baltic coast off Poland.

It started with the cruise ship MS Pirat. An 82 ft. vessel that began life as a fishing vessel and was later refurbished to resemble a classic pirate ship, the boat operates out of Kołobrzeg, the biggest resort town on the Polish Baltic coast. Every year, it takes tourists out on the Baltic for fishing trips, dinner cruises, parties and excursions. 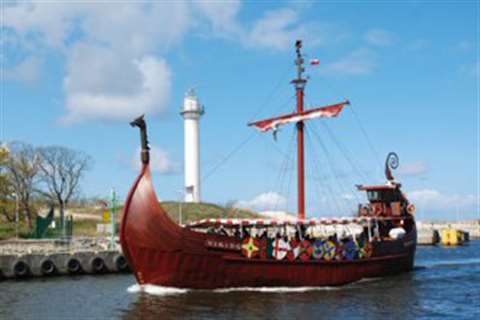 The Viking was one of three replica Baltic Sea cruise vessels to be repowered with 13.5 L John Deere PowerTech marine diesels.

“I explained how important high torque at low rpm is for a pleasant cruising experience,” said Dawid Warcaba, brand manager for the marine engine department at Techbud. “It was exactly what they were looking for.”

Żytki was convinced and undertook the repower. The 6135SFM85 engine is an inline six-cylinder engine with bore and stroke dimensions of 132 x 165 mm and an overall displacement of 13.5 L. Rated 500 hp at 1900 rpm, the engine incorporates a four-valve cylinder head, electronic unit injectors, air-to-seawater aftercooler and water-cooled exhaust manifold.

The engine was teamed with a Dong-I DMT400HL marine gearbox with a 4.48:1 ratio that drives a Lyon CP40 propeller. The engine’s PTO also drives a hydraulic pump.

“The repower had a big impact,” Żytki said. “Cruises are more pleasant for our customers and for us. We can stick to our time schedule and have reduced fuel costs, noise, and vibration. The engine always runs smoothly, and we’re confident it will continue to do so well into the future.”

Deere engine performance and efficiency
After the MS Pirat’s repower, word got around about the improved performance and efficiency of the Deere engine and one repowered vessel in eventually became three, as the owners of two other replica vessels, the Santa Maria, modeled after one of Columbus’s ships, and the Viking, an homage to a Norse longship, were inspired to replace their engines with new John Deere diesels.

The spacious engine room in the MS Pirat allows for easy access to the engine and marine gearbox.

“Our crew was so positive about the engines that they needed no convincing,” Żytki said. “We told them, ‘If you want an engine with good performance in power, torque, fuel efficiency and operating costs, buy a John Deere.’”

Both the Santa Maria and Viking were seriously due for repowering, with aging fuel systems causing enough white smoke to disturb the passengers. “We noticed the smooth, quiet, fuel-efficient running of MS Pirat,” said Krzysztof Kozieł, the Viking’s owner. “With several cruises a day, fuel efficiency is crucial.” 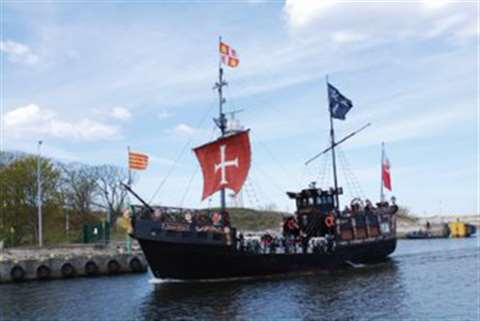 The Santa Maria is one of three replica vessels operating from the port of Kołobrzeg, Poland.

Adam Nowakowski, owner of the Santa Maria, said he has seen more reliable service, lower vibration and noise and greater fuel efficiency. “Plus,” he added, “our guests can enjoy the fresh Baltic air instead of engine smoke.”

Warcaba worked closely with the Parsenta shipyard in Kolobrzeg on the assembly and integration of the three engines. “The Parsenta team, under Mariusz Chmiele’s management, are easy to work with and have plenty of experience installing John Deere engines,” Warcaba said.

The ship owners agreed that Techbud was critical in the success of the repowers. “Warcaba took his time to help us choose the right engine and ensure it was installed according to PRS (Polish Register of Shipping) certification (similar to DNV),” said Żytki. “We had multiple conversations and Warcaba and Techbud engineers visited the MS Pirat several times.Their technicians can see possible faults quickly and accurately and are very quick to respond to our questions.”