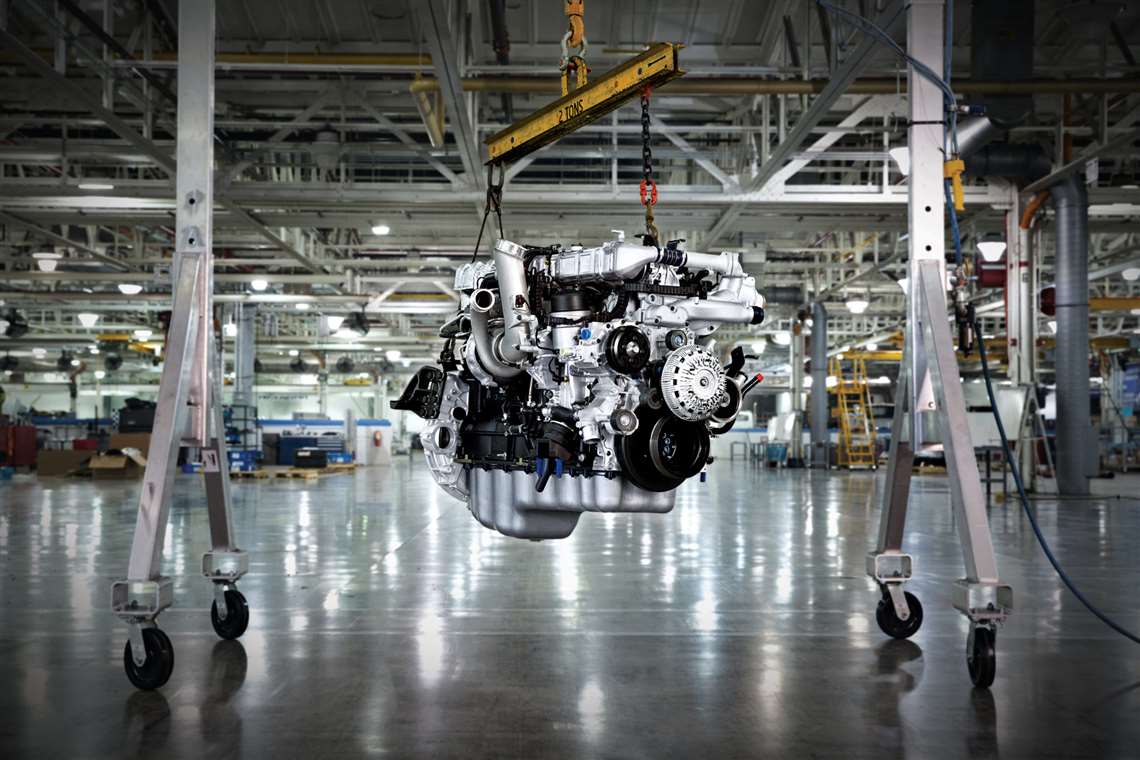 At TMC 2017 in Nashville, Tenn., International Truck unveiled a new 12.4 L diesel engine designed to provide industry-leading uptime to the Class 8 market. The new A26 diesel is available for order in the International LT Series of long-haul vehicles and RH Series of regional haul vehicles.

International said the new engine was developed through an initiative called Project Alpha, which brought together a new team of powertrain engineers who the company said pursued an approach that emphasized simplicity over complexity and sought to use only proven components to ensure uptime.

“Project Alpha has fundamentally changed how we design diesel engines,” said Bill Kozek, president, Truck and Parts. “The International A26 has been designed to address the rigorous demands of Class 8 truck customers. It’s been tested to extremes and meets a demanding B10 design life standard for an unprecedented 1.2 million miles.”

At 2299 lb., the A26 is the 55 lb. lighter than the engine it replaces and enables 200 lb. of additional weight reduction in vehicle-mounted components, International said. A compacted graphite iron (CGI) crankcase provides greater strength and fatigue resistance than traditional gray iron, while composite valve covers and a shot-peened aluminum flywheel housing delivers other weight savings, International said.

Engineered to deliver up to 5% percent greater fuel economy than its predecessor, the A26 utilizes a 36,300 psi high pressure common rail fuel system. Coupled with new cylinder head coolant passages that are 50% less restrictive to reduce parasitic loss to the water pump, the A26 reduces both fuel consumption and emissions, according to International.

The engine has undergone an extensive validation and testing process, which the company said included:

•         Hundreds of thousands of hours of “key life” and dyno testing at extreme engine speeds and loads.

•         Millions of real-world test miles over the harshest North American roads, including high altitudes and temperatures as low as -40° F.

•         Full validation cycles (concept, design, statistical and product validation) over a period of years to identify, correct and retest any issue.

“The A26 was designed from the ground up to deliver industry-leading uptime, durability and reliability,” said Darren Gosbee, vice president, Advanced Engineering. “The A26 is as simple as a modern engine can be, and we’ve built uptime into every part of the development process, from design to calibration to testing.”

More information on the A26 engine will be included in an upcoming issue of Diesel Progress.