The Ice Auger Machine was born one night during a frightening walk across Green Bay – not the Wisconsin city, but the large body of water to the north of it. It was winter and Adam Ford had been walleye fishing through holes drilled into 4 in. of bay ice. He called it a night after 25 mph winds blew in. There were stretches of open water and dangerously thin ice to avoid on the 2 mile walk back to frozen tundra and his truck. He pulled a sled for fishing equipment, which included an engine-powered ice auger. Despite physical exhaustion – he sat on the ice a few times to rest – Ford could not shake an idea he figured would make the auger’s little engine do more of the work. 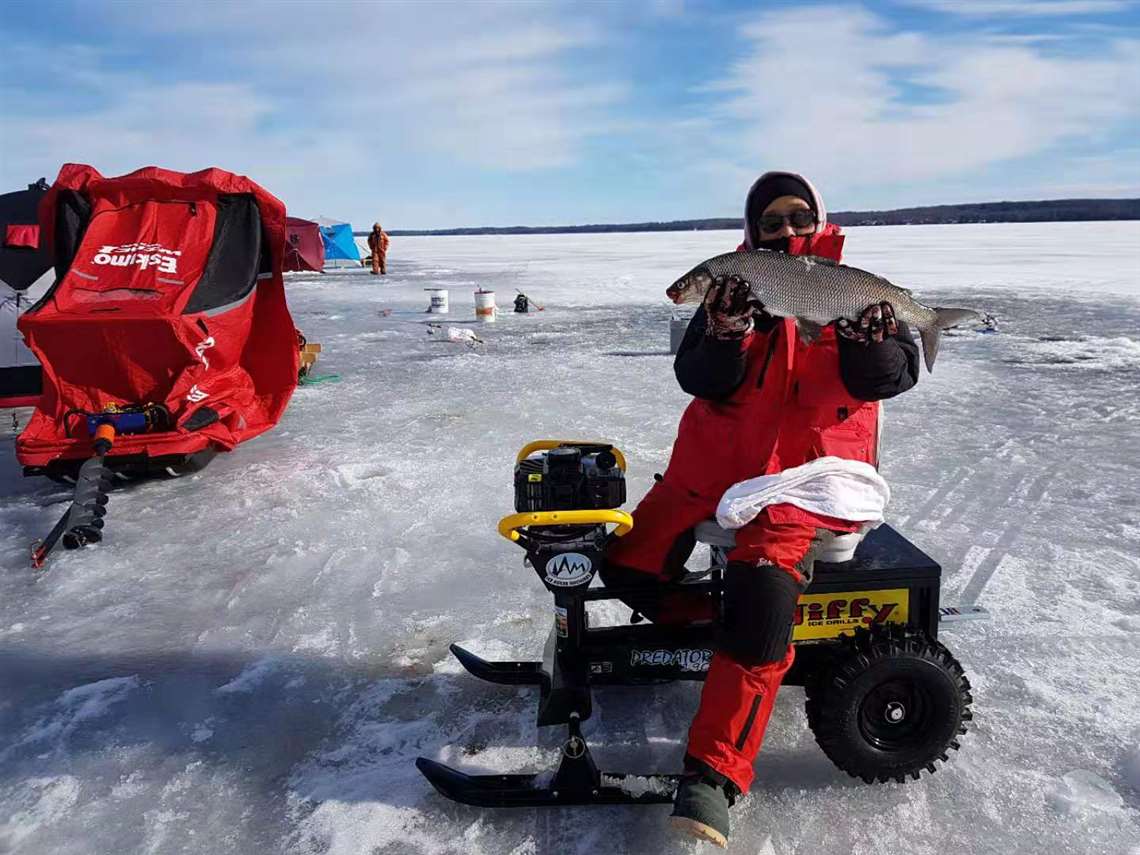 Back in his garage, he built a prototype from 2x4 in. wood, particle board and plastic milk crates. “You only use the motor for drilling holes in the ice when fishing, so I didn’t know if it was strong enough to actually move someone,” said Ford, of De Pere, Wis. “I ran the wooden prototype in my yard and realized it was going to work, so I retired that version and started building one that was durable. I called that version the Predator 1600.”

Ford, who was working as a manufacturing engineer for a machine shop at the time, landed on a design that carrying himself and pulled his gear across the ice. He sold a few to local enthusiasts and Ice Auger Machines LLC was formed; an original equipment manufacturer (OEM) that specialized in self-propelled ice-fishing carts. From the initial concept in 2010 the design evolved to become the Predator 1800, which Ford hand-built from aluminum tubes. With more of that model sold and field tested, he was able to combine his own experiences with customer feedback and further improved the design. 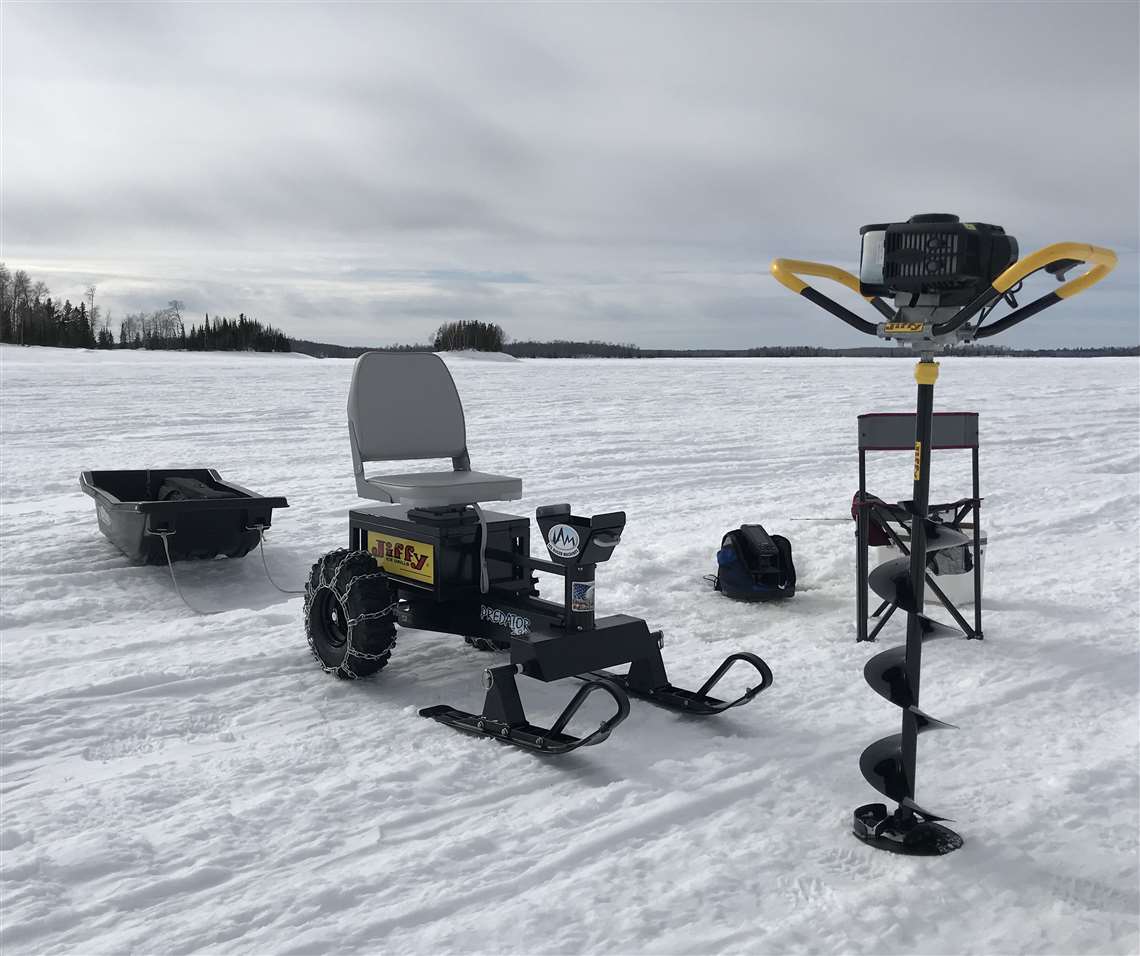 Ice Auger Machines’ Predator 1900 includes a pivoting seat with storage underneath. While developed for ice fishing, creator Adam Ford said he as well as his customers also use them for hunting.

For the next model, he said he made 68 refinements, including converting the tube frame into weldments “so I didn’t have to do all that work,” and outsourced its fabrication to a shop in Wisconsin. Ford still handles final assembly, testing and shipping.

The latest product from Ice Auger Machines is the Predator 1900. When a customer places an order, the “Full Package” option gets the 50 lb. wheeled base unit, ski assembly for the front wheels and a 52 cc Jiffy Model 30 gasoline-powered two-stroke power head rated just under 3 hp and a drill attachment.

“If you think about how many holes someone drills per season, the motor might run for only 10 or 15 minutes a year,” said Ford. By using the Jiffy ice drill power head to turn the rear wheels, the Predator 1900 can help owners increase their utilization rates with the Jiffy ice drill. He said he “has not seen a decrease in motor life” even after extensive and successful testing in snow up to 8 in. deep.

On a Jiffy ice drill, the vertical output shaft is connected to the drill assembly with a collar and a clevis pin. On the Predator, the engine mounts in much the same way, except it is pinned into a steering shaft and power is transferred via a chain drive system. Between front and rear sprockets, the chain is twisted 90 degrees, its length dictated by the need to keep everything moving efficiently as well as keep the machine’s wheelbase compact. Ford said the gear ratio is 1:3 for a top speed of 8 mph. Steering is performed via the head unit’s handles.

“We’re not trying to compete against a snowmobile or ATV,” said Ford. “This is for people who really want something portable and lightweight — people in Iowa, Wisconsin and Northern Illinois, where all they get is 6 inches of bare lake ice. For them, this works great. It fills a gap between walking and owning an ATV, and you can pick it up and store it in your basement when you’re done. It’s easier to transport to the lake, too. I designed it to fit on motorized wheelchair carrier or fit in an SUV.”

Ford said he is already at work designing Predator 2000, which he said will be even easier to manufacturer and hopes to have the first prototype complete before ice-out in 2021.

Written by Chad Elmore, this article was originally published in the December 2020 issue of Diesel Progress.