Chad Elmore explains how a technology company has collaborated with a California grower to move beyond fast-charging stations.

The successful installation of battery-electric technology in demanding commercial applications requires clever thinking and creative engineering to solve problems such as battery life and weight. HummingbirdEV’s electric tractors have been tested by a farmer in California since last year, and in 2021 a new charging concept was added to the grower’s fleet. 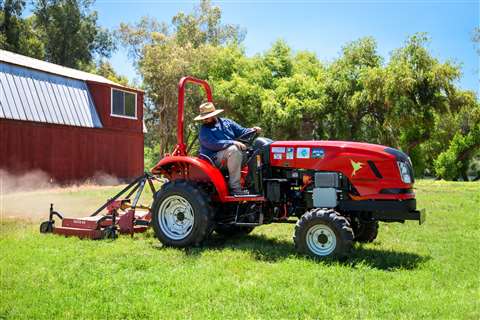 While harvest is the busiest time for tractors, growers can also put the electric HummiingbirdEV tractor to work performing other tasks

Designed to make in‐field fast-charging possible, the Vehicle‐to‐Vehicle (V2V) tender truck is built on a Class 6 chassis and can also be used to haul produce to market.

Based in the Californian city of Livermore, HummingbirdEV’s team comprises electric‐vehicle designers and engineers. These include COO Rakesh Koneru and engineering director/CTO Vinay Jayachand, who have designed and built all‐electric systems for public transportation and underground coal mines.

Koneru explained, “We are focused on medium- and heavy-duty on-road and off-road vehicle applications, and where we are different from the other start-ups is we take ownership from the component level up.

“Whether it is batteries, inverters, motors or chargers, everything is our proprietary technology. We have a unique powertrain system that gets rid of the fast-charging station. All of the fast charging happens within the powertrain itself.”

Its largest investor is Keshi Group, a Chinese manufacturer of mining vehicles, for which HummingbirdEV team developed an electric propulsion system for use in underground coal mines.

Koneru added, “We have deployed over 200 electric mining trucks that are built to an explosion-proof vehicle standard, and we have also built electric vehicles to carry people and equipment in and out of mines.

“The standards are very tough. Our systems have been tested to those rigid standards and work in hard conditions with a lot of dust and a high chance of flame.”

The California Air Resources Board (CARB) awarded a grant to Project Clean Air Inc. to administer the project. Project Clean Air is a non profit focused on improving the air quality throughout the San Joaquin Valley and Eastern Kern County.

Funding for the Net Zero Farming and Freight Facility Demonstration Project supported the tractor and V2V as well as a battery-electric Class 8 truck under development. The latter will be equipped with an all-electric transport refrigeration unit and designed for a 200-mile range.

The company said the refrigeration unit “will be the perfect vehicle for tree-to-bowl runs from the processing plant to grocery stores or wholesalers”. 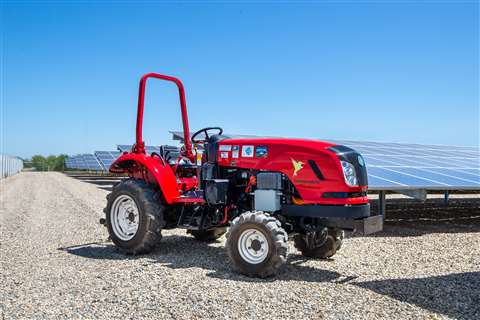 HummingbirdEV is proving its concepts with Moonlight Companies, a grower in California that boasts a solar farm

Overall, the project is intended to showcase the net zero farm concept, where every machine is electric and runs off renewable energy.

Koneru explained, “We looked at the feasibility of our technology to meet the net zero farm goal and then met the people who can get us there. From that we got to know Moonlight Companies, one of the largest in California when it comes to fruit growing and packing.

“They also have 2 MW of solar, which makes it a perfect test bed for us to showcase net zero from the tree to the grocery store.”

Based in the city of Reedley in California, Moonlight grows, packs and delivers a variety of fresh fruit, including mandarins (through a partnership with the Cuties brand) as well as peaches and pomegranates.

“The company has invested in automated, packing and cold storage facilities, which require a substantial amount of energy, to ensure that its fruit reaches the consumer in good shape.

To help the grower offset that, CalCom Energy designed and installed a solar energy system using a 1.1 MW ground-mounted solar array, a 315 kW solar carport and a 1.45 MW fixed tilt solar array. Two battery storage systems have also been installed. The system combiningly offsets around 54% of Moonlight’s electricity use. 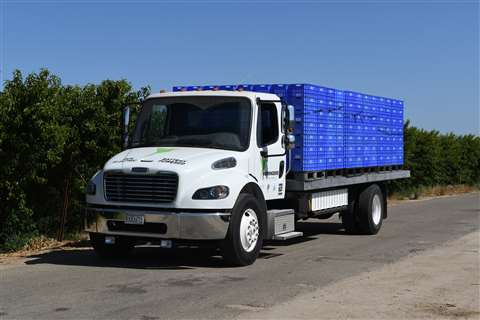 Software-driven powertrain
The HummingbirdEV team determined the most popular tractor size in California’s orchards was around 50 hp, so it developed an electric chassis that runs at that power level.

Koneru said, “The powertrain can handle up to 100 hp, but because of the application and the use-case scenario we toned it down to 65 hp. What we are also achieving with this design is commonality, so when you scale up or scale down it is not necessary to change all of the components.

“The battery pack size might go up or go down in size, based on the demand. But for us, within that spectrum of 30hp to 100 hp, the powertrain itself will not change because it is all software-driven.”

The Hummingbird tractor was first shown at California’s World Ag Expo 2020. Four machines have since been working for Moonlight in the orchard during the intense harvesting season as well as at the packing plant and warehouse. The tractors were originally charged via a Hummingbird stand‐alone charger. With the V2V truck they can now be recharged in the field, eliminating trips to the charging station and saving time – a commodity that is at its peak during harvest.

The Hummingbird Class 6 V2V truck has a maximum speed of 60mph and a range of 90 miles per charge. Equipped with a flatbed, it can also be used for haulage and has a gross vehicle weight rating of 26,000 lb.

Koneru added, “These farms are huge, so we had to think out of the box because we cannot expect these tractors to get back to the barn to charge.

“The way the current system works in the field is the operators drive the tractors all day, hauling produce and performing other tasks. They typically leave them right where their shift ends and then get in a van to get back to their cars. The next day, they are dropped off where the tractor was parked.

“Fueling is handled by a truck with a diesel tank that comes in and tops up the tractors. With V2V, growers have a truck that fulfills some farm operations and that can also use its battery to charge tractors in the orchard.”

While the Hummingbird solution is based on Moonlight’s unique work cycle, Koneru stated that the concept can be easily adapted to different applications. Another opportunity for the V2V technology is with maintenance trucks. A similarly equipped service truck, for example, could be used to charge a stranded electric car so the driver can get safely reach a charging station. 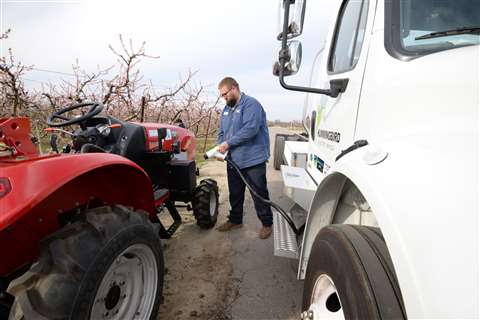 The HummingbirdEV V2V, based on an electric Class 6 truck, can be used to fast charge electric tractors in the field while also hauling fruit

Koneru enthused, “Proving this technology with a fruit grower was a perfect scenario because of their remote locations and how the equipment is driven. But we can scale this technology and adapt it to an urban environment.”

He explained about the software programming, which prevents the V2V from depleting its own battery when charging tractors, “We set up a safety checkpoint. As soon as the truck hits 30% of its battery capacity, it alerts the operator that it can no longer charge because it needs to get back to the base.

“In a typical operation it is not just charging one tractor, the truck can charge two tractors at a time, and that is another instance where the application determines the battery pack size on the truck.

“To come up with the battery pack size for the truck, we replicated the current driving range, which is the same method we used to design the tractors. We matched the steps in how the farmer does refuels today, which includes about two days between fill-ups in peak season.”

From that figuring, the team arrived at an 88 kwh lithium-ion battery for the charging truck and 25 kwh for the tractors. The tractor’s 120 kw peak motor (70 kw continuous) for their rated 65 hp, while the truck’s 300 kw peak motor for around 400 hp.

With four Hummingbird tractors on the job, the V2V charges two each day and recharges itself at night. The tractor has a charging time of one hour (20-80% battery life), while the truck needs from 90 to 120 minutes.

Koneru added, “The harvesting season is busy and with the sun in California, the workers get there early in the morning and leave by 2pm. From that point on, we still have solar that I can use to quickly charge the truck and get back to the tractors if needed.

“Or the reverse can happen, we can charge up the tractors before leaving the field and charge the truck off the solar panels.”

Exploring design concepts for future tractors
HummingbirdEV based its battery-electric tractor on a glider unit manufactured in China, and Koneru claimed that future designs may not have to look like a tractor, although could be used in the winter to operate lights or run irrigation pumps.

The business has partnered with OEMs and has not ruled out becoming a manufacturer.

Koneru explained, “As a startup, I cannot easily request a bare chassis from a major OEM. They are not going to open their door for us. We needed a platform to prove and showcase this technology.

“In speaking to multiple farmers, it has become clear that we should try to address the challenges from an emissions, convenience and from a future cultivation standpoint.

“We could develop a chassis that is closer to the ground, lower and narrower so they do not hit fruit trees all day yet still be able to do what a tractor does. In my mind the future tractor is like an ATV.

“There are many applications for the tractor when it is not being used for harvesting that could help large growers reduce their dependency on the grid. If the design is agile like an ATV, it could be used in place of a golf cart or utility vehicle, as well. They can get two or three different types of vehicles in one.”

HummingbirdEV is essentially a technology company at this point, with aggressive goals to reduce the need for what Koneru referes to as “expensive fast-charging stations”.

Koneru concluded, “Field work helps us learn and adapt. Four or five years down the line we may evolve into a company with five or six different entities, some dealing with vehicles, some with powertrain systems, some with aspects of electrification.” 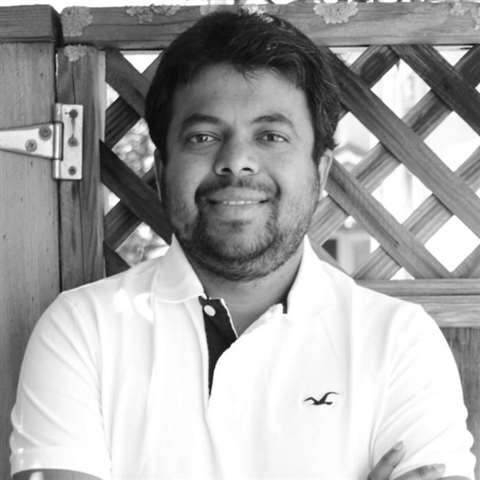 “Proving this technology with a fruit grower was a perfect scenario because of their remote locations and how the equipment is driven.

“But we can scale this technology and adapt it to an urban environment.”