How ClearFlame aims to decarbonize diesels

It’s one thing to validate a technology in the lab. It’s quite another to prove it in the real world. 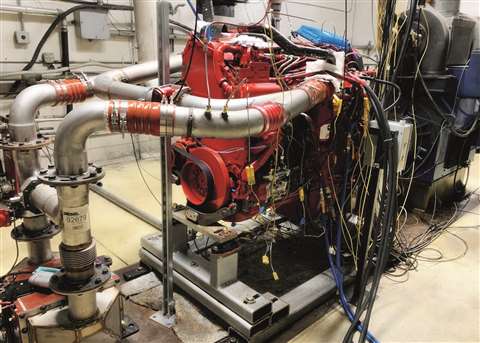 ClearFlame Engine Technologies has taken the next in step in development of its proprietary technology designed to enable heavy-duty truck diesel engines to operate on 100% renewable plant-based fuels. In December, the company began its initial road testing, a critical milestone in its objective to decarbonize heavy-duty transportation.

“This demonstration proves the workability of our technology that takes the dirty diesel fuel out of heavy-duty trucks,” said BJ Johnson, CEO and co-founder of the Geneva, Ill., headquartered company. “The transportation sector is currently the largest contributor of greenhouse gas emissions. Simply hoping that we get to net-zero greenhouse emissions by 2050 is not good enough.

“If we want to get serious in the fight against climate change, we need more solutions that can enable swift decarbonization today, particularly for heavy-duty trucks, which are among the worst offenders.”

The demonstrator vehicle for ClearFlame’s engine technology is a 2019 International LT 625 Class 8 truck equipped with a 15 L Cummins X15 diesel engine rated 500 hp. The engine was retrofit with ClearFlame’s technology to operate on E98 ethanol.

“This vehicle is truly one-of-a-kind – the only Class 8 truck to run on 100% ethanol fuel without any ignition improver and without any diesel fuel,” said Julie Blumreiter, ClearFlame’s co-founder and chief technology officer. “Driving this vehicle today is actually less carbon intensive than a comparable electric-powered truck.

“We rebuilt the engine using ClearFlame’s technology and now we can drive the vehicle around to get that additional experience and proof beyond the dyno cell. Some things you can only learn doing vehicle testing. Right now, we’ve just driven it bobtail for these very early tests. But on the dyno, we’ve demonstrated the engine matches the full lug line of the production diesel. We have plans to get the truck under load on a proving ground, and also get it under load on a chassis dyno, so stay tuned as we check these additional boxes leading up to fleet handoff.

“We already know that the engine can match the diesel performance curve exactly. So there’s no concern on our part that we will be able to pull a load the exact same way.”

The company said the wide availability, cost-effectiveness and lower emissions of renewable ethanol made it the fuel of choice for testing but stressed that the ClearFlame technology is fuel agnostic and able to operate on virtually any fuel. This flexibility allows for fuel choice based on factors like low-lifecycle carbon, operating cost, or regional availability, the company said.

The key to the ClearFlame technology is ultimately about managing heat to create auto ignition – basically utilize the diesel cycle – with other fuels than traditional petroleum-based diesel.

“Every fuel has properties that determine its ignition delay,” said Blumreiter. “How long after you inject it will it ignite? Diesel is very reactive – it has a short ignition delay. Other fuels that don’t have a high cetane number are less reactive and so they tend to get used in applications where you have some kind of ignition assist, like a spark. 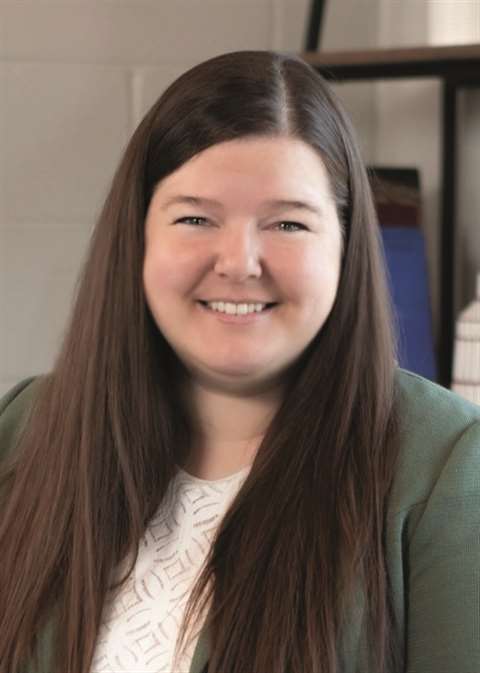 “The ignition delay curve for every fuel is a function of temperature. The hotter you get, the shorter the ignition delay is for any fuel. We looked at how hot we would need to make the air such that when we injected ethanol with the same timing as a diesel injection, it would light off right when diesel would have lit off.

“It’s really just about having a hotter charge that you inject the fuel into that gets it to light off right away and form that same mixing-controlled plume that diesel would form in a normal diesel engine. From there, you can use the diesel cycle, and all the benefits that come with that, such as high torque and efficiency.”

The ClearFlame technology gets the heat for the fuel charge from the engine itself, removing the cooler from the exhaust gas recirculation (EGR) circuit and adding a bypass on the aftercooler to use the already-hot air from the turbocharger compressor.

“There’s plenty of hot air from the turbo and the hot exhaust – the energy is there, you just have to manage it better.”

The heat from the engine is used to raise the temperature of the intake air sufficient to cause ethanol to auto-ignite when injected into the cylinder just short of top dead center, just like a diesel. Blumreiter said the in-cylinder temperature is approximately 200° C hotter than a conventional diesel, while the exhaust is about 25° and 75° C hotter, “so it’s not way hotter than a diesel, but will make any aftertreatment system happy.”

Yet it’s hot enough to require thermal protection within the combustion chamber in the form of thermal treatments to the piston crown, the underside of the cylinder head and valves. And that, along with ethanol injectors replacing the diesel injectors and a ClearFlame engine control unit to control it all, is essentially all it takes to change a diesel engine into a ClearFlame engine operating on ethanol.

Other liquid fuels can also be accommodated, with adjustments to accommodate the characteristics of the specific fuel. “When looking at other fuels, we have to look at the specific fuel, whether it would need some degree of hardware adjustment, something like the fuel pump needing to flow either more or less volume, then the calibration, just based on the volumetric energy density and cetane number of the fuel,” Blumreiter said. “For us, being based in the Midwest and looking at the U.S., ethanol is low cost, already scaled in the market, and readily accessible.

“But in other markets, it may be a different fuel or in the future, as fuel synthesis and e-fuels take off, we would be ready and waiting to use whatever fuel is easy to synthesize and low cost for customers to get their hands on. ClearFlame isn’t tied to any particular fuel, we are de-coupling the benefits of the diesel engine from the need for diesel fuel – that freedom opens up opportunities like this first ethanol truck, that can simultaneously lower TCO and reduce GHG emissions.”

Along with reducing CO2 emissions, ClearFlame’s engine technology also cuts emissions of particulates and NOx to the point where aftertreatment could be downsized and no diesel particulate filter would be required.

Following its initial testing, ClearFlame is aiming to hand its vehicle off for fleet testing this summer and also plans to retrofit other fleet vehicles for testing at fleets in September. “We have a target to have at least seven of them in fleet hands in September and continue to scale that up,” Blumreiter said.

The company is initially targeting its technology as an aftermarket retrofit targeting existing truck fleets. “We know that the energy density between diesel fuel and ethanol is different,” Blumreiter said. “But on a dollars per mile (basis), it will be lower cost for fleets. Even fleets that wouldn’t necessarily have some environmental motivation to be low carbon are looking at the fuel savings they could get and finding this an attractive offering.”

Class 8 trucks might need to carry more fuel to match the range they currently get with diesel, but Blumreiter noted “it’s much easier and more common in the industry to add more liquid fuel storage on a semi truck than storage for gaseous fuels. In terms of what the fleets are comfortable with, what the drivers understand – filling up your truck with liquid fuel – the behavior change is minimal. Just pick the pump that says ethanol instead of the one that says diesel.”

Adapting the ClearFlame technology to an existing truck engine is similar to an in-chassis overhaul, with a potential payback period of as little as 15 months.

“When we were engineering this, we made sure that we understood that this is the payback period that fleets have come to expect,” Blumreiter said. “We targeted that as our entry point.”

ClearFlame is working with John Deere on a pilot demonstration project for an off-highway engine platform, demonstrating the company’s technology in original equipment integration. Besides its ability to use low-carbon liquid fuels, the ClearFlame engine technology potentially offers some significant benefits to engine manufacturers, in part because of what engines wouldn’t need.

“The fuels that we’re using don’t form appreciable amounts of soot, so this could be sold without a DPF, which then would be a pretty big cost savings at an OEM level,” Blumreiter said. “Even if there is some specialty or low-volume component, having the cost of a DPF to offset any added manufacturing cost provides a lot of headroom on even breaking or even potentially coming in at a lower cost to build.”

Another possibility sure to be attractive to engine manufacturers is “we actually could have a smaller cooling package despite running a hotter strategy,” Blumreiter said. “The EGR cooler is a really big source of heat flux into the coolant. Overall, the heat rejection into coolant is lower from our converted engine than on the baseline diesel that we measured prior to the conversion.” 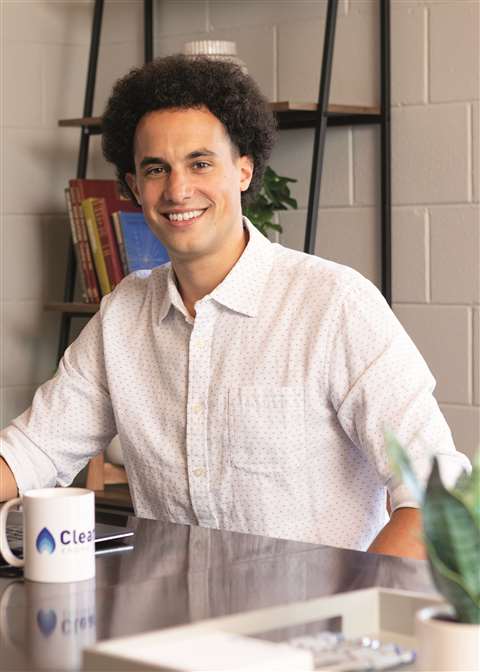 “That’s even more important in the off-road space,” Johnson said, “because you don’t have ram air and cooling is even more of a problem.”

Johnson added that, “there’s a lot of effort right now to figure out, how can we make things like renewable diesel or synthetic gasoline or renewable natural gas? How do we make a fuel that’s identical enough that it can work in the engines of today?

“We believe it’s a lot more powerful to say, how do we make an engine agnostic to take advantage of wherever the fuel landscape goes in the future? Maybe it’s what we’re starting with, maybe it’s something else.

“We’re going to win because for us, it doesn’t actually matter.”

While ClearFlame’s engine technology could potentially add decades of life to the internal combustion engine, the founders don’t view electrification as an “us versus them” proposition.

“We really don’t see ourselves as trying to go head-to-head with electric for the same applications,” Blumreiter said. “I see it as this spectrum ranging from easy to electrify to hard to electrify. We’re looking at the things like long haul, and applications that have really tough duty cycles and may need to use liquid fuels forever to be able to get the jobs done.

“I see us coming in as much more of a complement. We’re on the same team, kind of pushing petroleum out of the market, rather than pushing each other.

“We’re also not doubting what electrification could grow into, but we’re trying to do something about emissions right now.

“Climate scientists look at carbon accumulating in the air as kind of like having an interest rate. If we can abate a ton this year instead of a ton 30 years from now, it’s actually more impactful on the eventual climate 50 years out. That’s the reason we’re feeling the urgency to start having that impact now, because we know it’ll have that compounding effect in the future.”

Johnson agreed about the importance of speed in terms of having a carbon impact, “and that’s what we’re about.

“The costs for EV are not there today and the cost for our technology is such that we can have an impact right away. Does that make us a transition technology? That remains to be seen. Maybe at some point the cost of EV does pencil, in which case yes, we were a transition technology that still had a massive impact over decades. But if EV never gets there, or decarbonized liquid fuels reach net-zero or even net-negative carbon intensity, we remain relevant indefinitely.” 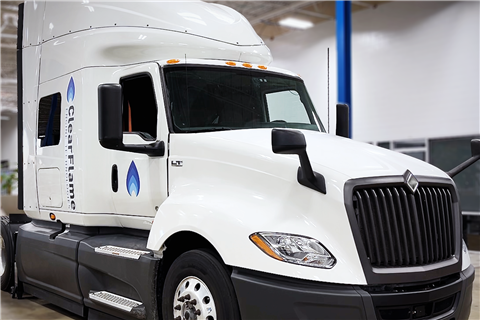 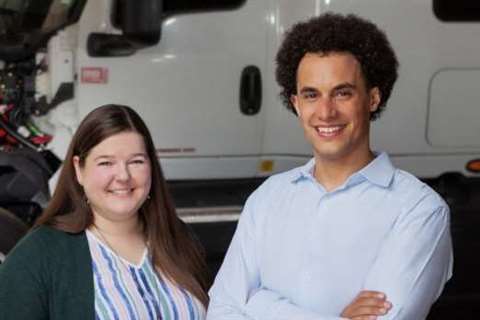