It has been said that every cloud has a silver lining and even a near-fatal bite from a black widow spider isn’t necessarily all bad. At least that was my experience about 15 years ago while recovering from in the hospital after getting such a bite. The medications used to combat the spider venom had some mind-altering side effects and it was during one of those episodes that the inspiration for what would become the successful Reed A-Series Rockmaster concrete pumps occurred. It was literally designed between visits from doctors and nurses while I recovered.

Reed Pumps has been producing equipment to move concrete since 1957 with products that include hydraulically powered reciprocating piston units using a hopper and drive cylinder and air-propelled shotcrete units that mix concrete in the nozzle immediately before spraying it. Reed equipment is used for everything from sidewalks and foundations to tunnels and walls on multi-story buildings and even lining kilns in steel mills.

The Reed A40HP is popular for residential work such as creating sidewalks and large patios as well as swimming pools which are often built using shotcrete.

The pumps originally inspired by the spider bite, the Reed A-Series, have been powered by Perkins diesel engines since their inception. Perkins was chosen because their engines offered an optimum balance between cost and performance with good power curves, high power density and plenty of torque.

These are entry-level machines and buyers tend to be very price sensitive so the Perkins value profile and excellent reputation for reliability and longevity all fit perfectly with the new design. Reliability is invaluable in this day and age, because nobody wants to get phone calls, they just want customers to go out there and use the machine and not have to call with problems.

Today’s flagship of the A-Series is the A40HP, which is powered by a Perkins 854F-E34T four-cylinder turbocharged diesel rated 74 hp (55 kW) that meets U.S. EPA Tier 4 emission requirements. The engines are delivered by Reed’s Perkins distributor, Perkins Pacific of Ridgefield, Wash., complete with all electrical connections, a cooling system complete with fan, the correct mounts and an aftertreatment package. The distributor also provides spare parts stocking and field support for the A-Series pumps.

The A40HP is rated at 40 cubic yards per hour at up to 1172 psi (80bar). It can move concrete up to 975 ft. (297 m) horizontally or 400 ft. (122m) vertically. This high pressure and volume capability make the A40HP suitable for many shotcrete applications which require a combination of pressure and volume typically handled by pump systems using more costly technologies.

The Perkins engine drives either a Rexroth or Parker gear-type pump that powers the hydraulic outriggers for stability and the S-Tube, also known as an S-Valve, that directs concrete from the reciprocating pistons of the concrete cylinders into the discharge hose. The pumping cylinder drive circuit includes a flow-control valve that allows users to adjust the output while keeping the engine’s speed at a constant.

How to run it

In operation, the S-Tube is shifted between the two concrete cylinders fitted with the pumping pistons by a cylinder that is driven via an accumulator circuit. As one piston reaches the end of its discharge stroke the S-Tube is moved to the other cylinder which has just completed its intake stroke. The result is a virtually continuous flow of concrete through the S-Tube and into the discharge hose. 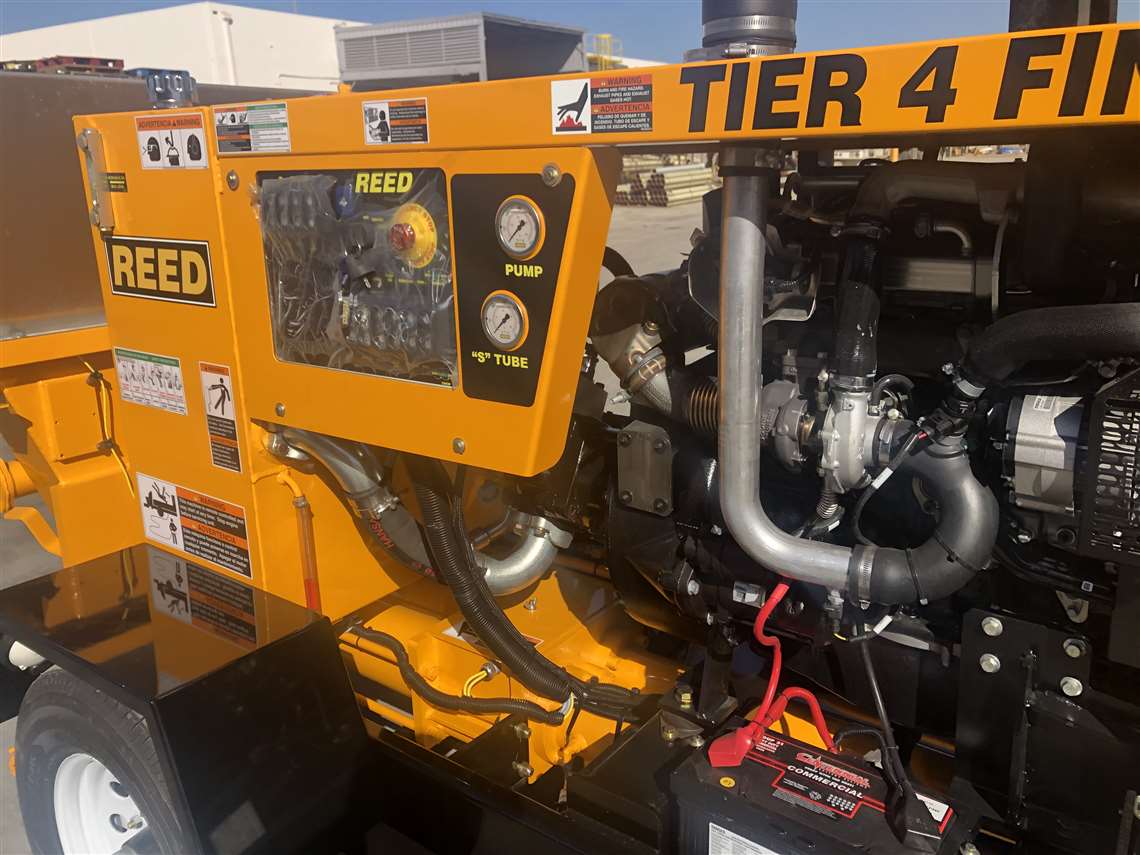 The flagship of Reed’s A-Series is the A40HP, which is powered by a Perkins turbocharged diesel rated 74 hp.

Switching of the S-Tube is controlled electronically and the change from one cylinder to the other takes less than 250 milliseconds. The mating surfaces on the cylinder discharge and S-Tube are made of hardened high-carbon steel, or optionally carbide, to minimize wear.

The cylinder driving the S-Tube is sufficiently powerful to shear rocks in the concrete up to 0.75 in. (19 mm) in diameter. The S-Tube has a reverse function that can be used to clear rock jams by sucking concrete out of the discharge hose and back into the pumping cylinder. It also features a unique parabolic reduction designed to keep concrete flowing evenly from both pumping cylinders.

The hydraulic system is designed to take a lot of abuse and work in very high temperatures because of the cooling system. If the machine is used properly and regularly maintained, it can easily be in service for 20 to 25 years.

The A40HP is a go-to for residential work such as creating sidewalks and large patios as well as swimming pools which are often built using shotcrete. On larger jobs its high-pressure capabilities allow lightweight concrete to be placed up to the sixth floor on a commercial building.

A-Series pumps are used for virtually everything under the sun including lining steel mill kilns with a special refractory material that contains both glass and steel. It’s heavy and hard to pump, but the A40HP can handle it for distances up to 60 or 65 ft. and the Perkins engine just purrs while doing it.

Not bad performance for a machine designed during a near-death experience. Not bad at all.

Written by Duane Remus, this article originally appeared in the April 2021 issue of Diesel Progress. Remus is director of Technology for Reed Manufacturing in Chino, Calif.