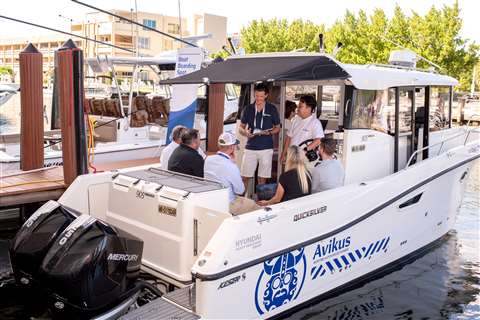 Avikus, the autonomous navigation subsidiary of shipbuilder HD Hyundai (formerly Hyundai Heavy Industries), introduced “NeuBoat” at the International Boat Show in Fort Lauderdale, Fla. The technology, which offers a level 2 autonomous navigation solution for recreational boats, was featured in a concept vessel displayed during the event.

NeuBoat, which is based on the combination of “neuron” and “boat,” is meant to imply the company’s AI autonomous navigation solution will play as critical a role as human nerve cells when it comes to self-recognition, decision and control in various maritime conditions, Avikus noted. The vessel featured at the show demonstrated NeuBoat’s Navigation Assistant System (NAS) and Docking Assistant System (DAS) capabilities. An experience booth at the show enabled visitors to intuitively figure out autonomous NAS and DAS technologies and hardware devices, such as computers and cameras, used for autonomous navigation solutions.

The NeuBoat technology utilizes a combination of cameras, GPS, radar and lidar as well as an integrated cognitive system to recognize and assess situations in real-time. In addition, the navigation process can be viewed via an augmented-reality screen, with the ability to control navigation from anywhere on the vessel via a mobile device.

Also during the show, Avikus and maritime electronics provider Raymarine signed a memorandum of understanding for the commercialization of autonomous navigation boats. Based on this collaboration agreement, Avikus will launch joint research and development to install the autonomous navigation solution onto a multi-function display for boats manufactured by Raymarine.