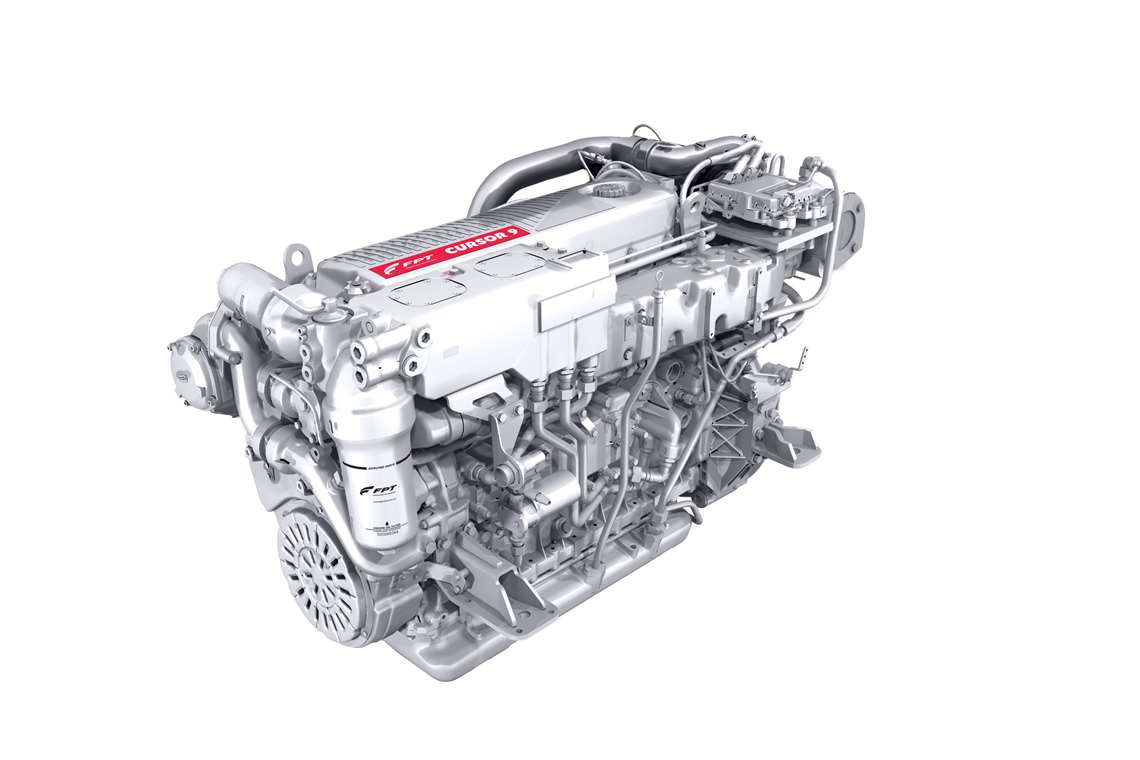 But why three engines at the same power level? Guglielmo Tummarello, FPT Industrial’s Marine Market Segment director, explained that the choice for the 170 hp/125 kW power mark was dictated by the limit set with the IWV Stage 5 emissions regulations. Above that power mark, requirements are different.

Thus, the introduction of three engines with the same power output but different displacements and torque outputs and no urea-based aftertreatment systems, to cater to the needs of all possible customers/users.

All engines are based on existing FPT engines and have been optimized for inland waterway applications, basically acting on the fuel map and on a specific dataset for Stage 5 operation in the engine control unit. The C90 170 unit also includes an optimization of the turbocharger.

The N67 170 has 6.7-L displacement and reaches over 800 Nm torque at 1300 r/min. It is a development from the N67 450 N marine engine for the USA emissions regulations: a flexible and performing unit that is appreciated for light- and medium-duty commercial applications. It features an enhanced cooling system and improved injection at cold temperatures.

Finally, the C90 170 has 8.7-L displacement and reaches over 1100 Nm torque already at 1000 r/min. “This engine in operation has an idle speed around 600/650 r/min, so it is pretty clear that it reaches its maximum torque almost immediately,” said Tummarello. “It is a solution for boats with larger displacements and a very reliable unit for medium- and heavy-duty use.”

As already mentioned, the C90’s fuel map was optimized and a specific turbocharger was adopted to be able to guarantee the torque output.

Some changes were introduced also in the valve lubrication circuit that utilizes an oil retention system to minimize fuel leakages in the combustion chamber and reduce the emission of visible smoke from the exhaust pipe. “Although this was not prescribed in the IWV Stage 5 regulations, the reduction of smoke emitted is a major benefit for boats used on rivers or along coasts, often in the vicinity of urban and densely-populated areas or in environmental-sensitive locations.

Another important aspect of the three new engines for inland waterway applications in that all will be available also for keel cooling option (besides the traditional cooling with heat exchanger and sea-water circuit).

Tummarello explained that FPT’s engineering worked with the existing sea-water cooling system in terms of material and structure. Since this was already a circuit well protected from corrosion, the keel cooling variant makes it possible to reduce the content of anti-corrosion media in the coolant, to optimize heat dissipation and allow the customer to use less coolant for an even more environmentally sustainable operation and lower maintenance costs.

For FPT Industrial the keel cooling solution is quite a new segment that the company will target for inland waterway applications in Europe and shallow-water operation in the USA.

FPT Industrial’s marine engine range is composed of eight engine families, from 85 to 1000 hp (62 to 735 kW). All marine engines by FPT Industrial are covered by the MyFPT app for remote monitoring and service that was very recently upgraded and officially presented. Read more in dieselprogress.com