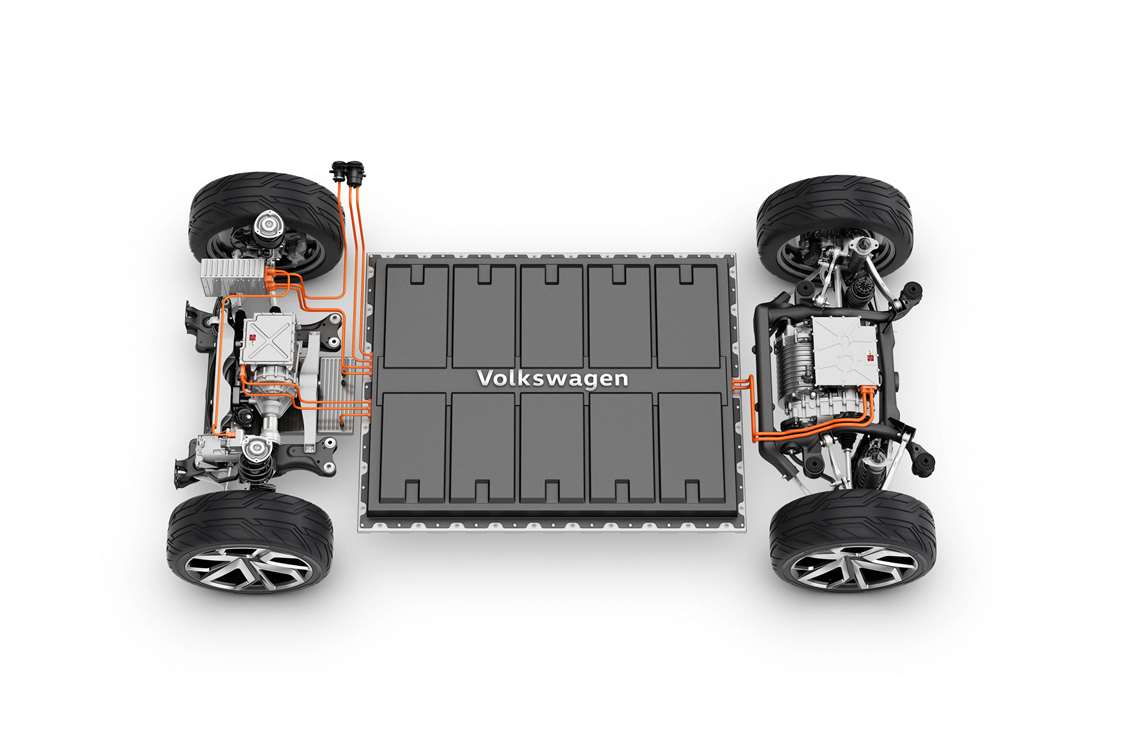 Ford Motor Co. and Volkswagen AG have signed agreements to expand their global alliance to meet the evolving needs of their respective customers in Europe and other regions in a variety of product areas, including commercial and electric vehicles.

Plans for the agreements were first announced by the two companies last July.

The two giant manufacturers said they anticipate continued growth in global industry demand for commercial vehicles and for electric vehicles to add valuable scale to their individual product portfolios.

The announcement said the alliance will strengthen the commercial-vehicles businesses of both companies as early as 2021 – with a city delivery van based on the latest Caddy model, developed and built by Volkswagen Commercial Vehicles and later a 1-ton cargo van created by Ford.

This in turn, is expected to lead to a Ford electric vehicle for Europe by 2023 built on Volkswagen’s Modular Electric Drive (MEB) toolkit (shown above).

“In light of the Covid-19 pandemic and its impacts on the global economy, more than ever it is vital to set up resilient alliances between strong companies,” said Volkswagen Group CEO Dr. Herbert Diess. “This collaboration will efficiently drive down development costs, allowing broader global distribution of electric and commercial vehicles, and enhance the positions of both companies.”

Ford’s use of Volkswagen’s MEB architecture in Europe will represent another cornerstone in Volkswagen’s electric vehicle strategy, and further efforts by both companies to fulfill their commitments to the Paris 2015 Agreement. Volkswagen and Ford plan to explore additional ways to cooperate on electric vehicles.

Over several years starting in 2023, Ford said it could deliver 600,000 electric vehicles atop the MEB architecture, which is designed to combine space and performance with electric drive. The vehicle will be designed and engineered by Ford in Cologne-Merkenich.

Additionally, the companies will both work with Argo AI, Pittsburgh, Pa., to form an autonomous-vehicle businesses based on Argo AI’s self-driving technology. Last week, Volkswagen closed its previously announced investment in Argo AI. Ford already had ownership and development interests in Argo AI.

Volkswagen and Ford independently choosing to invest in Argo AI illustrates the technical leadership and progress of Argo AI’s self-driving system, the two companies said. Argo AI’s SDS is the first with commercial deployment plans for both Europe and the U.S. The global reach of Ford and Volkswagen will give Argo AI’s platform a large geographic deployment potential for autonomous driving technology.

The Volkswagen/Ford alliance does not include cross-ownership between the companies, which will remain competitors in the marketplace.