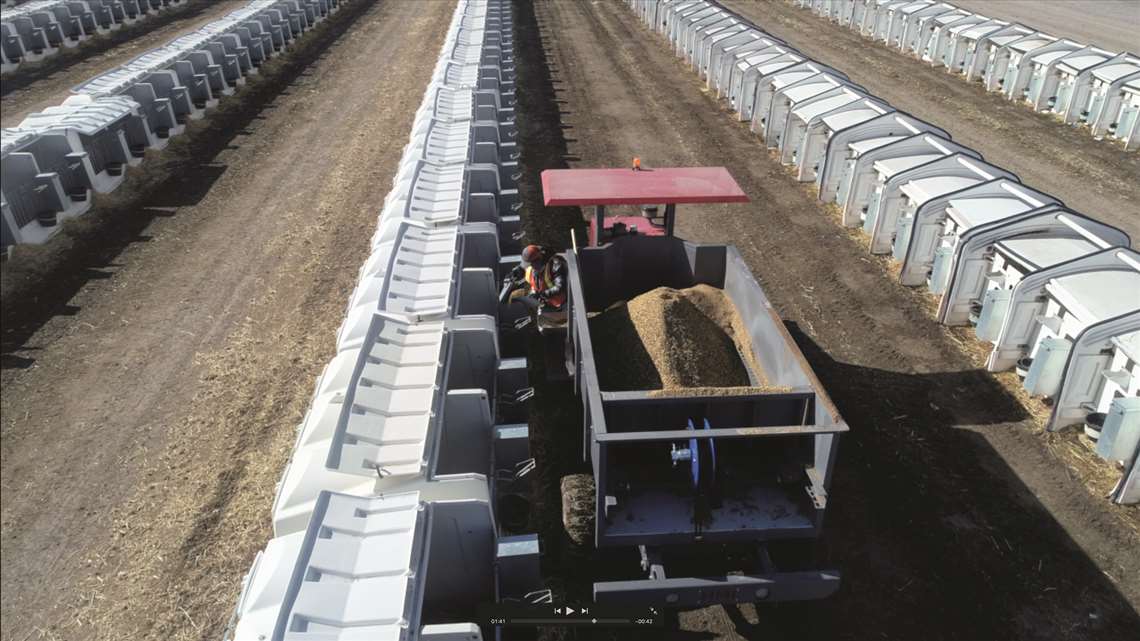 While potatoes may be Idaho’s best-known agricultural product, cows — of the dairy and beef varieties — outnumber humans. Dairy is the state’s most valuable ag industry, according to the Idaho State Department of Agriculture, producing more than 13 billion pounds of milk with a street value of $2.2 billion.

More than 800 million pounds of cheese is produced in Idaho each year. The other key ingredient to a cheeseburger can also be sourced from the state’s ag industry, as more than 2.1 million cows are raised by thousands of beef cattle operations – ranging in size from small ranches to massive corporations with 30,000 head.

Much of the state’s agricultural activity occurs in the south. It is there in Gooding, Idaho, where the family-run Hatfield Manufacturing Inc. (HMI) has been supplying dairy and livestock operations since 1978. The bulk of its business is barn equipment such as stanchions and freestalls as well as calf-raising supplies, including houses and grain delivery trailers. Over the years the company has become a national and international supplier with an ever-expanding catalog.

All the time HMI’s team has spent talking with customers out on feed lots has led to a range of new products, and recently that was the impetus behind its first engine-driven, self-propelled machine to go into series production.

To be healthy and productive, every cow required special care as calves, and that stage can be an immense operation all its own. The “calf ranch” on one Idaho dairy operation is home to around 50,000 calves. There, more than 200 calves arrive every 24 hours and they require a carefully rationed meal at least twice a day.

“They’re feeding calves every day, morning and night, and some operations do it three times a day,” said Brandon Sellers, sales and service tech, HMI. “Some are so large they’re feeding around the clock, but most are pushing 8 to 9 hours a day, wide open and running hard.”

After a testing few prototypes, the company introduced the appropriately named Grain Delivery Truck two years ago. HMI called it a “game changer in efficiency and labor costs” and said the truck allows a single operator to feed thousands of calves every meal.

“We’ve made feeder trailers for years, and our main products have been stanchions and headlocks for a long time,” said Sellers. “Now these trucks are starting to hit the market and we’ve really caught everyone’s attention. With this truck, you don’t need a separate tractor and two operators, and they’re priced so that it can pay for itself in a year.”

Sellers said the company shopped around for diesel engines, and ultimately selected the mechanically injected, liquid-cooled

Kohler KDW1404 four-cylinder diesel engine rated 24 hp. It’s connected to a two-speed hydrostatic drive system with that can creep along when feeding calves or reach a 12 mph top speed to help it travel between lots. The engine uses an air filter with a precleaner to help keep dust and chaff at bay.

“We are a fabrication company, and so there are certain things we don’t do in our shop,” said Sellers. “We’re impressed with the support we got from Kohler’s engineers, and especially when they came out to Idaho to do the application testing. We’ve really been impressed with Kohler.”

The 8 ft. box is designed to hold 4 yd. of grain and employs a hydraulic push table to meter out the grain and keep it within reach of the operator. The machine can be operated from either side. On feed lots with tighter lanes, two people can fill and dispense grain while one also does the steering.

The company has also developed a 750 gal. tank for dispensing fresh milk or water to calves. The tank can be quickly swapped with the grain box.