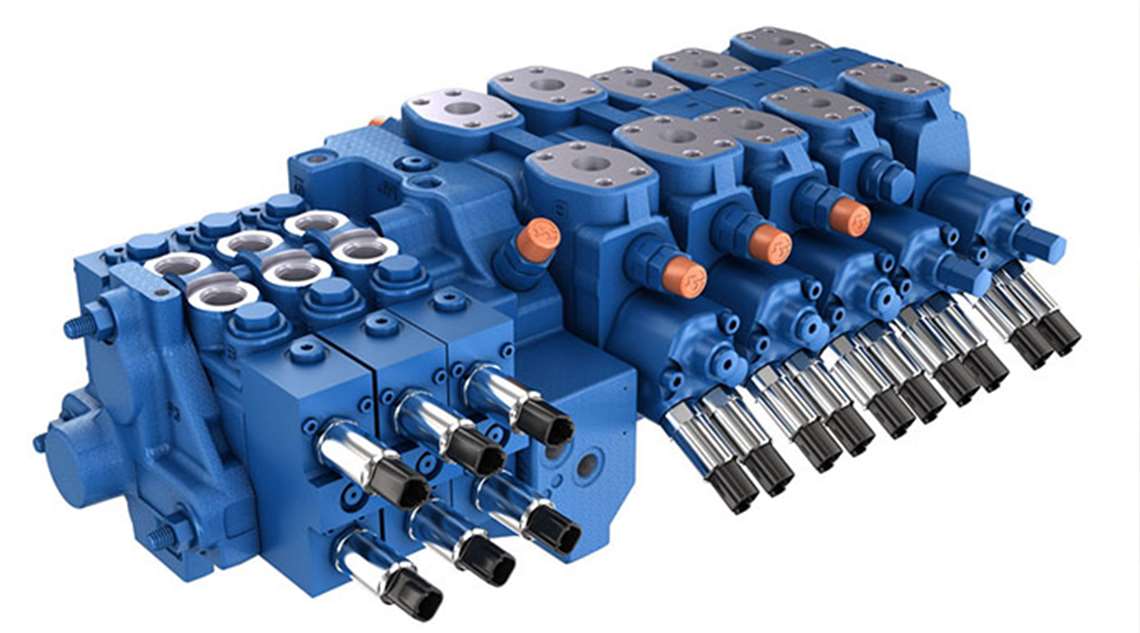 Bosch Rexroth unveiled the successor to its M7 20 and M6 22 valve manifold ranges at Bauma 2019. The new RS20 platform is made up of freely combinable functional sections and compatibility with RS15 valve sections helps to avoid over-engineering, the company said.

With a maximum flow of 300 l/min (79 gpm) per section, the RS20 platform from Rexroth achieves an even lower pressure loss compared to its mono block M7 20 and M6 22 predecessors.

The consolidated platform marks the transition from the monoblock to the flexible sandwich plate design and allows machine manufacturers to combine different sections to main control valves for 13 to 17 ton mobile and tracked excavators as well as 20 to 50 ton wheeled loaders and bulldozers. Further areas of application include material handling, mobile cranes, forklifts and drilling machines, Bosch Rexroth said. The number and arrangement of the functional slices, even those of different sizes and with different control technology, are designed to make it possible to control various applications flexibly at all times, the company said.

Functions which previously had to be installed separately can now be integrated into the main control valve. These include a stabilization module, bypass priority module or an anti-drift valve. The pump and return channels pass through the entire manifold without diversions or constrictions. The sealing surfaces between the individual sections are designed to prevent leakage from the inside to the outside. Thanks to the sandwich plate design, the new concept offers even better pressure resistance compared to its monoblock predecessors, Bosch Rexroth said.

The future-proof design also allows them to integrate functions which go along with future market requirements. Electronically controlled components such as Rexroth’s new A10VOH variable displacement pump can be integrated at any configuration level. The RS20 platform is ideal when it comes to gradually integrating functions which are to be controlled electrohydraulically now or in the future. Combinations with the existing RS15 platform are also possible, the company said.