Living together: Company said both technologies have a place in motive power applications.

Product development teams typically take an application-specific approach for the selection of engines, and that is a technique that is suitable for batteries, as well. EnerSys works closely with its customers to specify the correct energy storage device for a particular job. Starting in May, the company can draw on two different chemistries within its NexSys line of virtually maintenance-free batteries: Thin Plate Pure Lead (TPPL) and lithium-ion. There is a market for both chemistries. 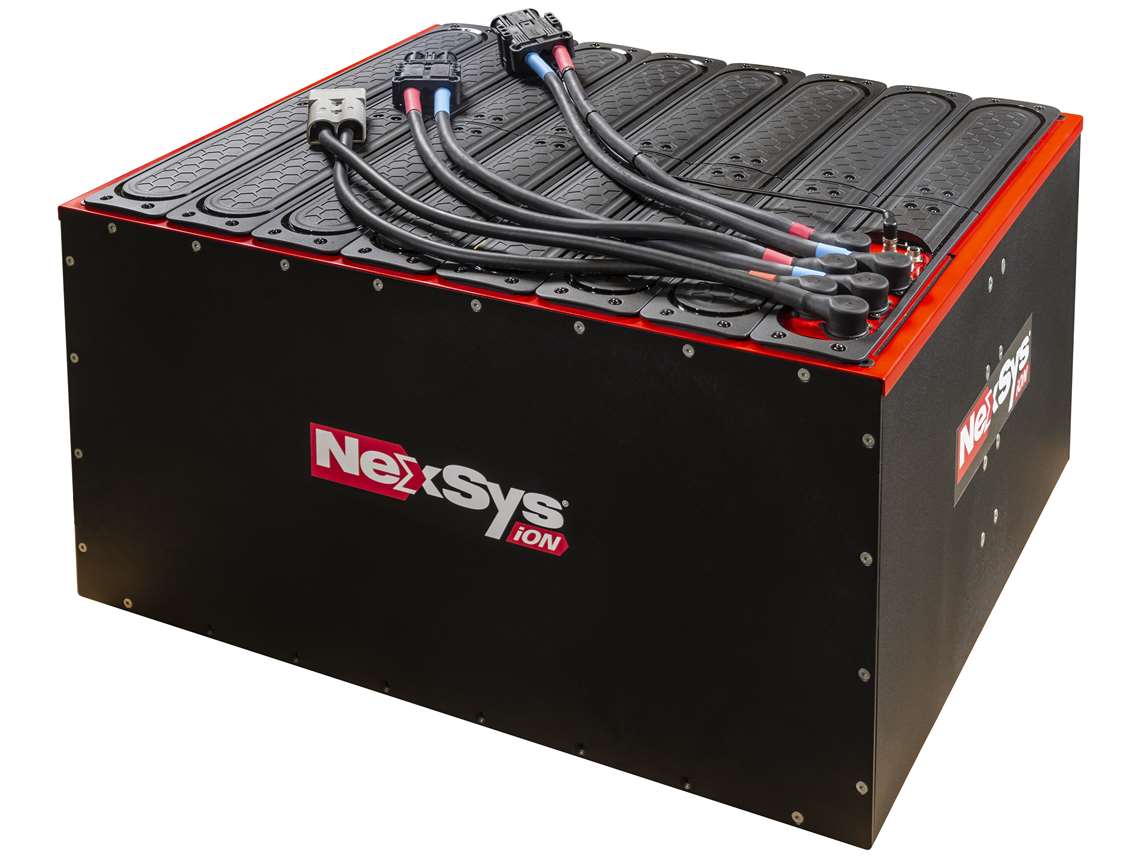 “Lithium-ion has become a term that everybody is asking for because they want a virtually maintenance-free battery, and they think that’s called ‘lithium-ion’,” said Tim Wittig, general manager - Motive Power Specialty Markets Americas, EnerSys. “But there are different chemistries out there that are well-suited to do the job.”

Headquartered in Reading, Pa., EnerSys is a supplier of stored energy solutions for industrial applications. The company aims its products and services at three primary markets: motive power (such as material handling, mining and railway), energy systems (reserve power for telecommunication, utility and uninterruptible power supplies) and what it calls “specialty.” The latter covers its transportation (engine starting batteries and accessories), aerospace and defense business. EnerSys posted a market cap of $3.9 billion for 2020.

In TPPL batteries, the pure-lead electrodes are thinner than plates in standard batteries, so more can be used in the same footprint. This provides a large reactive surface area and low internal resistance which boosts power density, said the company. The sealed design of the TPPL solution eliminates the need to add water and perform other maintenance and also eliminates the risk of acid spills. The batteries can withstand shock and vibration and be opportunity-charged during a lunch break or at another time that’s convenient for the customer. End-users have also reported that the batteries reduce their overall Total Cost of Ownership (TCO).

EnerSys got serious about supplying the commercial vehicle market with its TPPL batteries around eight years ago, and since then said it has seen sales climb as the technology and the markets evolved. It recently introduced the second generation of its TPPL battery, NexSys Pure Gen 2 battery, and started production on lithium-ion batteries designed for motive power applications, NexSys iON batteries, a product line that has been under development for three years.

With lithium-ion batteries receiving so much of the spotlight lately, it might appear as though lead was dead.

“At the end of the day, I don’t think it has to be a lead versus lithium-ion discussion,” said Wittig. “Especially with the diversity offered by our company in motive power batteries. My team represents our NexSys product line, and for us, NexSys represents a virtually maintenance-free battery experience, not a specific chemistry. We take an application-specific approach.” 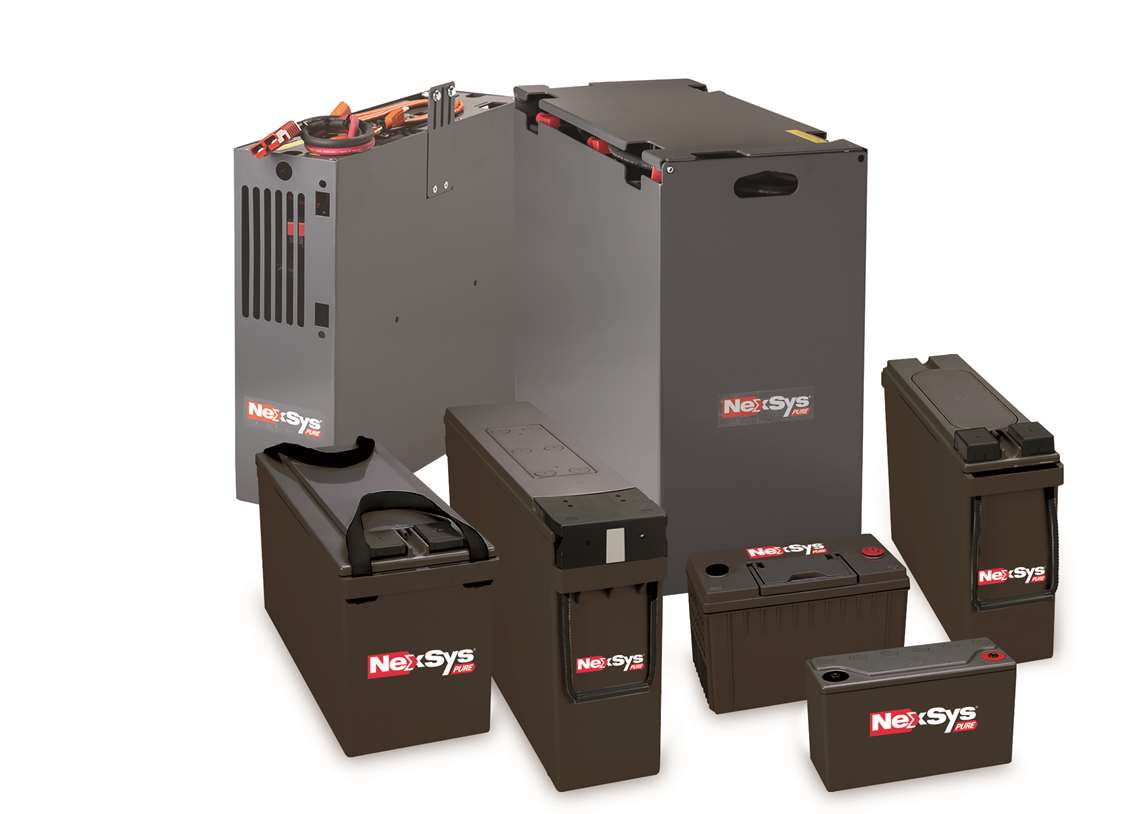 EnerSys said its NexSys Pure TPPL batteries are ideal for providing power in light- to medium-duty applications and are available in a range of capacities and configurations.

The company said its NexSys Pure TPPL batteries are ideal for providing power in light- to medium-duty applications and are available in a range of capacities and configurations. The new Gen 2 design uses a carbon additive to extend cycle life and increase the life of its energy throughput. The batteries are also equipped with a Wi-iQ battery monitoring device that tracks performance metrics, including discharge current and State of Charge (SOC). The company said the batteries can be fully charged in less than two hours.

Meanwhile, the all-new NexSys iON batteries are designed to power heavy-duty equipment. They are engineered with large-format prismatic cells and Nickel Manganese Cobalt (NMC) cell chemistry. A control module in each battery features an integrated Battery Management System (BMS) that enables CAN communication with the charger and the vehicle for safety and control.

“EnerSys strives to remain at the forefront of innovation to provide our customers with premium motive power solutions that maximize productivity and profitability,” said Harold Vanasse, senior director of Marketing, Motive Power Global, EnerSys. “Our suite of advanced NexSys batteries gives operators two dependable choices exclusively tailored to meet and exceed their power demands regardless of the vehicle application. Both battery chemistries can be utilized in different applications in the same facility to achieve an overall lower total cost of ownership with a common user experience.”

EnerSys has more than 10,800 employees globally, and in North America alone it has a team of 125 technical sales representatives that use data collection tools and other methods to better understand the energy needs of a customer’s particular application.

“Everybody thinks they’re running their motive power batteries very hard and putting a lot of energy through them,” said Wittig, “but the fact of the matter is you could have the same model of forklift at two different locations, and one’s moving pillows and the other’s moving bricks. The energy needed for each machine is different. By working with the customer upfront, collecting usage data, and using our proprietary EnSite modeling software, we can make sure we’re matching the right battery capacity and the right charger to a specific application.”

In one case study published by EnerSys, American Airlines specified NexSys Pure batteries for burden carriers used at airport terminals. The conventional lead acid batteries it was using failed in less than a year. Based on the success it had with TPPL batteries in its luggage tractors, the airline tested them in people movers at one of its airport hubs. The performance and data collected in the test was so compelling, said EnerSys, that NexSys Pure batteries became the airline’s official battery for all new burden carriers.

TPPL batteries are limited in their energy throughput, which is 160% of the rated amp hour capacity per day. “If you think about amp hours as the size of a fuel tank, and using round numbers,” said Wittig, “on a 1000 amp hour NexSys TPPL battery, the customer can use 1600 amp hours per day. We achieve that through opportunity charging. They might run for three hours and use 300 amp hours, and then we’ll take it back to the charger and put amp hours back in. Based on a power study, we’ll match the battery to make sure that the customer has enough energy to perform their operation every day.

“Whether it’s motive power for material handling vehicles or floor care scrubbers, they’re all worked differently. The duty cycles for light-, medium- and heavy-duty aren’t really well-defined in the industry, but our experience shows that TPPL batteries are very well-suited for light- and medium-duty applications.”

The biggest benefit to the customer, said EnerSys, is there is virtually no battery maintenance required. 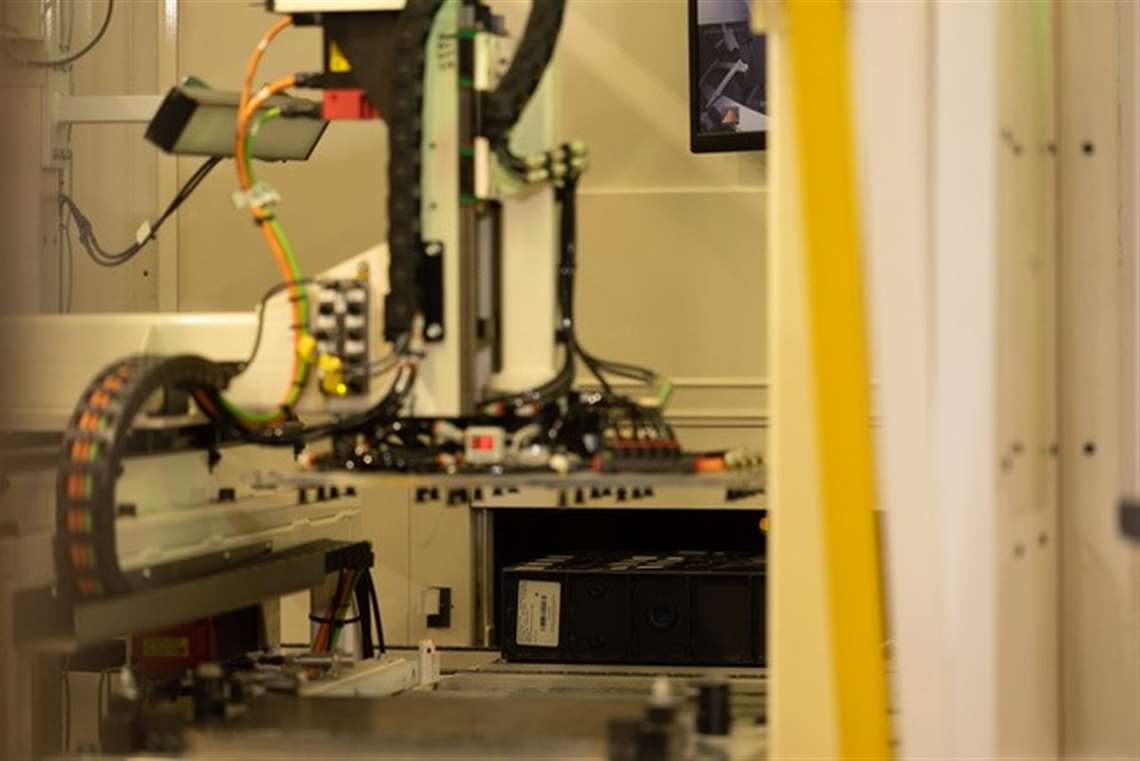 “And now we’re bringing our lithium product to market,” said Wittig. “We believe the TPPL battery is going to fulfill most of the needs of our customers. However, when we have customers that need more than 160% capacity, because they really do have a demanding application – such as a three-shift distribution center or heavy manufacturing – that’s where the lithium battery starts to come in. We’re going to have different kW capacities and physical sizes of the battery packs.

“We foresee that in a distribution center, for example, where they’ve got multiple pieces of equipment, some machines will be performing light-, medium- and heavy-duty work all day. Why use an expensive heavy-duty battery in a light-duty application? In applications where they make sense, lithium provides the same maintenance-free experience. But you can also put energy into it much quicker than even a TPPL battery. The recharge times come down because the energy going back in increases.”

In early April, one of the first large orders of battery packs shipped from the company’s Spokane, Wash., factory to a carpet and flooring equipment supplier. The customer had tested NexSys iON batteries in its equipment and was reportedly happy with the performance of the product, in particular the speed of recharge.

EnerSys said it plans to take the application-specific approach to the next level, as well, with a program that will make additional lithium-ion battery modules available on demand. “For a customer with a seasonal business, when during Christmas time they might have a three-month boost in demand and need more energy, EnerSys could rent battery modules for three months,” said Wittig. “We can fit the forklift with dummy modules that weigh the same if they’re being used as a counterweight. There’s some flexibility there, too, and we are pretty excited about that feature.”

Written by Chad Elmore, this article originally appeared in the May 2021 issue of Diesel Progress.