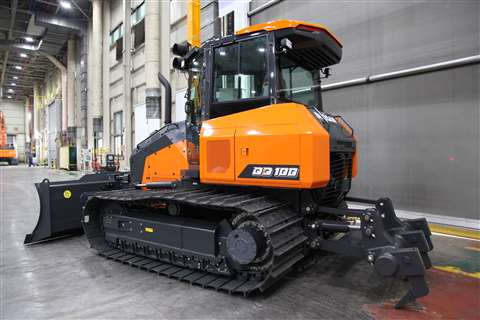 The DD100 features improved visibility to both the front and rear of the machine plus comes with a standard rearview camera. (Photo: Doosan)

More than a few heads were turned late last year when Doosan Infracore North America, Hyundai Doosan Infracore’s (HDI) North American heavy equipment division, previewed a “pre-prototype“ crawler dozer at dealer and trade media events held at its proving grounds in Tucson, Ariz. The announcement of a planned entrance into the dozer market in the second half of 2022 seemed a significant departure for a division long known primarily for its hydraulic excavators, wheel loaders and articulated dump trucks.

Yet, according to the company, the move is simply the next step in a broader growth plan that includes an annual sales target of $10 billion by 2025. To meet its goal, a significant expansion of the North American product portfolio proved to be in order.

Beyond its strategic objectives, the expansion will also enable the company to be “a better partner to our dealers,” said Moo Young Park, engineering manager, Doosan Infracore North America. “We want our dealers to be more focused in Doosan products. If we have more products to provide… our dealers can concentrate more on the Doosan products and don’t have to go to different OEMs to get their full lineup.”

The portfolio expansion began with the addition of four all-new next-generation -7 Series mini-excavators – designed and manufactured by Doosan – earlier this year. And while crawler dozers seem a large jump up from there in machine size class and capability, Doosan saw it as the logical next step forward.

“Seeing the dozer machine population in the U.S., our management decided that it’s a good portfolio to have in the U.S. market to expand our relationship with our dealers,” said Park. “We want to be a full line supplier. That’s why we are adding dozers, and that’s why we added the mini-excavators earlier this year.”

Coming back bigger and better 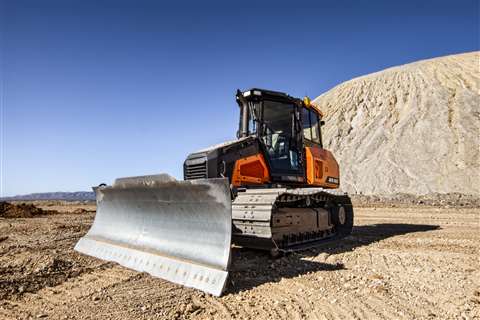 While previewing the DD100 in its early stages (shown in pre-prototype form) was “a risky move”, it generated feedback that went into improving the machines prior to production. (Photo: Doosan)

The preview events held in December 2021 weren’t the first time a Doosan dozer had laid tracks in North America.

“There was a Doosan dozer, a DD80, that had been manufactured, like, 20 years ago,” Park said.

Marketed at the time under the former Daewoo badge, the dozer was a smaller, lower horsepower (89 hp) machine not specifically designed for the region. “A couple of them showed up in the North American market, but the results were not that good, so we pulled out of the dozer market.”

Now, the company is re-entering the dozer realm with the 122-hp, 10-metric-ton DD100, an all-new, high-power design that – unlike the previous iteration – is targeted largely to U.S. customers. It will be followed by the 150-plus hp, 13-metric-ton DD130, which is slated to reach dealers by mid-2023.

“The dozers that we are developing right now, the market size is the biggest in the North American region (the under 140-hp size class), so the majority of the population will be in the U.S.,” said Park. The machines will also be available in other major global markets.

The DD100 dozer previewed to U.S. dealers and trade media in late 2021 was in the early stages of product design, Park said, and a number of things have changed since. What hasn’t changed are the “big numbers,” or project targets for model specs.

“The engine, power wise, [has been] the same since the early stage of the development to our start of production machine,” Park said. “Performance wise, what we want to promote is that [our machine] has the biggest power in the class and the biggest weight in this class. If you have more power and more weight, you can move more dirt, and more tractive force is actually transferred to the ground.” 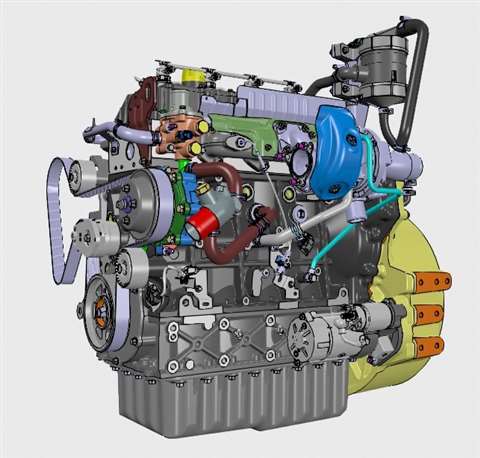 Power for the DD100 is derived from a 122-hp Doosan D34 3.4 L, inline four-cylinder diesel engine that meets Tier 4 Final without a DPF. (Photo: Doosan)

The engine’s compact design enables it to be mounted on a variety of machines, including wheel loaders, excavators, forklifts, tractors and more. “Basically, this engine has been used in many other applications already, so it’s a proven engine,” Park stated, adding, “It’s made by Doosan and engineering is done in house, so if we need support on the engine, it’s under our roof.”

Doosan makes its own engine map, as well, which Park said can be tuned and tested to ensure it satisfies emissions while maintaining competitive fuel consumption. With the engine department and dozer manufacturing all under one roof, adjustments can be easily made to satisfy the main usage of the machine while ensuring optimal fuel usage in its primary operating conditions. 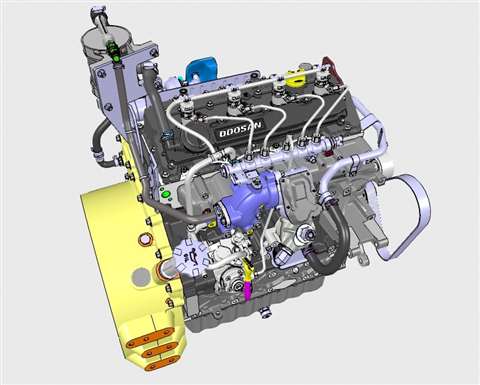 The D34 is paired with an electronically controlled hydrostatic transmission. According to Park, electronic control equates to more freedom to tune machine operation. “With the electronic control, we can make the machine [movement] smooth and more fuel efficient in some aspects,” he said. “We can fine tune, we can independently control. As the user gives the input, the machine can react as we program it.”

Controllability is also aided by electrohydraulic implement controls with standard electronic load-sensing system that enables operators to tune machine operation to their preferred “feel” and skill level. Further addressing varied skill sets is a built-in slope assist function, developed by Doosan in-house, that enables even inexperienced operators to get up to speed quickly. Factory installed 2D machine control will be available, as well, with 3D machine guidance and 3D machine control offered as dealer-installed options.

The DD100 will come standard (XL configuration) with a 2.9-cu.-yd. six-way blade with a height of 3 ft. 9 in., width of 8 ft. 11 in. and blade angle of 23°. The pitch is adjustable from 52° to 58°. Twin Rexroth hydraulic pumps deliver flow to the travel motors and an additional pump for the blade along with other hydraulic functions.

An 8-in. Smart Touch display provides access to machine functions via an easy-to-read touchscreen. Both the display and controls should look familiar to those who have used other Doosan equipment.

“The display monitor, the controller used inside the dozer, any engine components – they are all shared with our excavators and loaders,” Park said. “So, hardware wise, it’s a new product but it has been in the industry for many years.”

Even given its familiar elements, Park admitted it was a risky move showing the machines to dealers and the trade press early in the design process. However, he added, “Having these reviews and having many design iterations after our media launch and showing it in the dealer meeting – that was really productive.

“Showing [the dozer in the U.S.], we found some good feedback for improving the machines, especially the rear visibility,” he said. “So, we improved the rearview visibility and little things that could have been missed in the internal development, like adding more thickness to the guardings, having more protection to the cylinders and the hoses.” 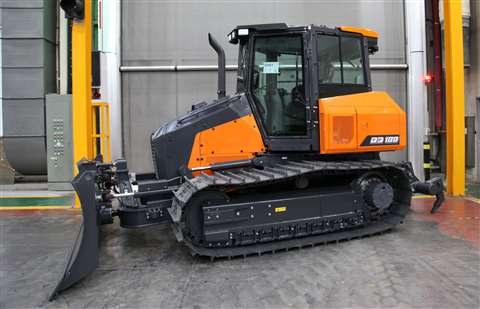 Mass production of the DD100 was set to start in June with the first units coming off the line projected to reach dealer lots in Q3 2022. (Photo: Doosan)

The preview also resulted in further enhancement to forward visibility. “It’s hard to see in front of the machine, so Doosan has developed an inline precleaner to get a bit better visibility to the front, and we designed the front part of the dozer to be able to see the side of the blade,” Park said, adding that the dozer’s “nose” is both shorter and lower. “When comparing us to the competition, the length of view will be shorter for our dozers… You’ll be able to see closer distance from the [operator] station.”

Minimized front pillars, more glass area and a standard rearview camera, plus LED lights for nighttime operation, add to visibility around the machine.

Another critical area is the undercarriage, which represents a large portion of the total cost of ownership (TCO) for dozers. The rugged undercarriage used on both the DD100 and DD130 will incorporate a dual/single flange-type roller plus other heavy-duty components – many of which are being sourced locally to HDI’s South Korean manufacturing facility. Several track guard options will also be available.

To further manage TCO, Doosan plans to offer the OEM undercarriage at competitive pricing to ensure any overhaul during the dozer’s life will be cost competitive.

The first DD100 model plus a second pilot machine are currently enroute to North America, with arrival anticipated by the end of June/early July. Mass production of the DD100 began in June and the first units coming off the line are projected to reach dealer lots in Q3 2022. The DD130 will follow shortly, with the first pilot machine set to ship later this year and production starting as early as February 2023.

There will likely to be few additional surprises upon the DD130’s arrival. “Many components will be shared with the DD100,” Park said. “The image will be pretty similar, all the functions will be similar and the theme of the machine is similar – it will have the biggest engine in the class. So, compared to [competitive] machines out there, engine power wise, it will be on top of the class.”

This added oomph built into both the DD100 and DD130 models will prove a key selling feature for Doosan as it seeks to outmatch long-established competitors and capture a slice of the $2.1 billion U.S. dozer market. 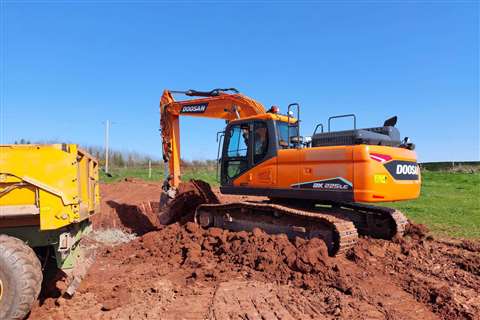 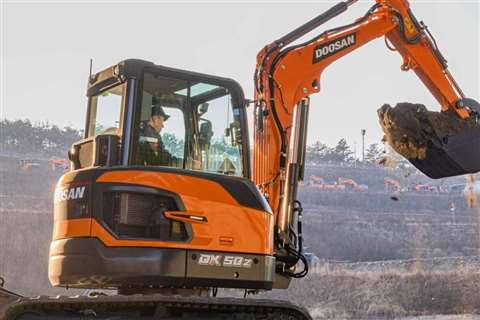 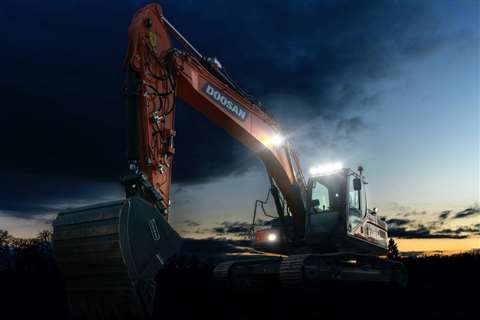