Diesels Only Part of The Future For Deutz 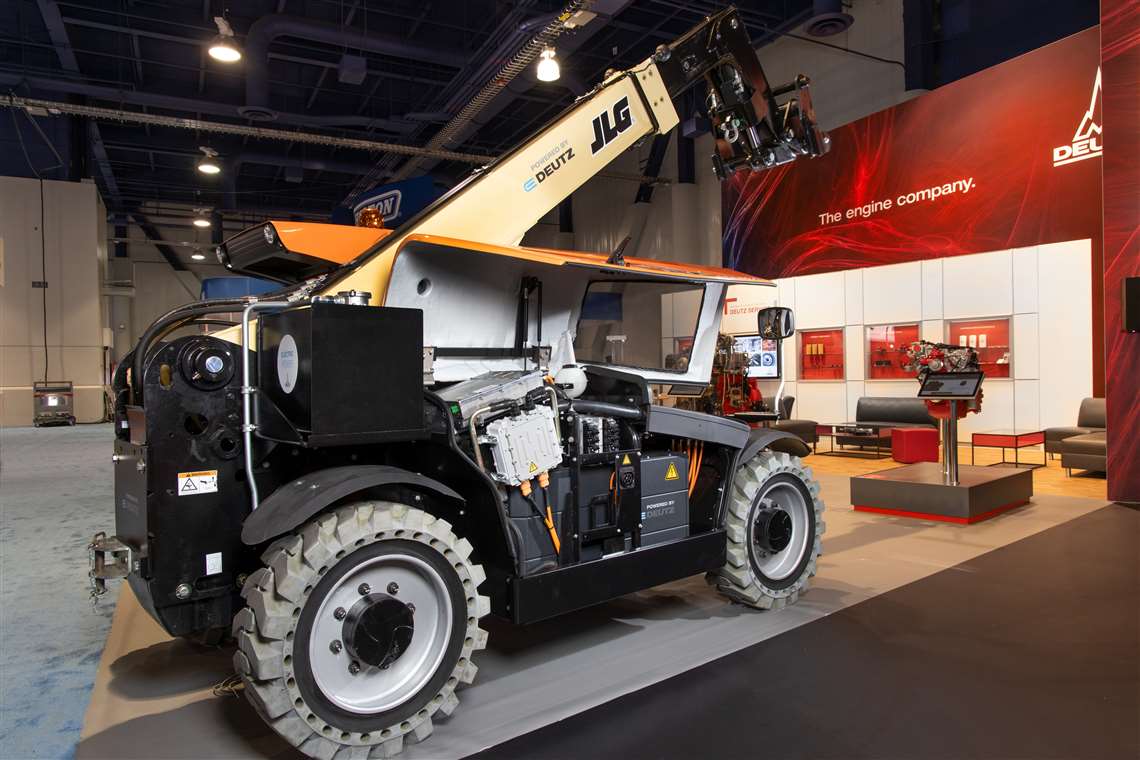 If you needed more evidence that the world of power systems is changing (and you shouldn’t), the Deutz exhibit at ConExpo-Con/Agg in March underscores that point rather strongly.

One of world’s oldest manufacturers of diesel engines, Deutz had eight displays in its booth at ConExpo -Con/Agg, only two of which were new diesel engines. The diesels were the company’s TCD 2.2 and the newly introduced model TCD 13.5. There was also a remanufactured Deutz Xchange diesel.

The biggest part of the Deutz display was an all-electric model G5-18A telescopic handler concept, developed in collaboration with JLG. The G5-18A has a 360V drive system that uses a split drive comprising two, 40 kW electric motors – one for driving and one for the hydraulics in the telescopic arm. The battery is from the EDeutz modular toolbox and offers 42 kWh of capacity. The 6.6 kW charging system can restore the battery charge to 80 percent within four hours.

A battery drive system, developed in collaboration with Futavis, now ready for pilot production, was also shown. Deutz acquired Futavis, a German battery specialist, in 2019 to strengthen its inhouse expertise in battery technology.

Also on display was a hydrogen-fueled Deutz TCGD 7.8 engine, as well as an LNG or gasoline-fueled G 2.9 model.

“When tackling the challenge of making drive solutions sustainable for the future, we always keep our minds open to all technologies,” said Dr. Frank Hiller, chairman of the board of management of Deutz AG. “Our approach builds on combinations of electric drives and internal combustion engines that offer the potential to be operated in a carbon neutral manner in the future using sustainable fuels.”

Hiller said the diversification of Deutz’ portfolio was part of a strategy that the company began about two years ago called “Innovative Drive Systems.” Deutz, he said, would continue pursuing internal combustion engine technologies, but also other technologies that were important not only for the company, “but also must present a strong business case for our customers.”

A big part of the new strategy was a major investment in electrification, both acquisitions and technology development.

“We created two paths,” Hiller said. “On one side is electrification and on the other side is combustion technology, which will continue to be a technology for the future. There some things we see for further optimizing combustion technology.” He added that all Deutz diesel engines are Stage 5 certified.

Hiller detailed Deutz’ two path strategy further, saying the combustion technology side does, or will include, diesel, gasoline, biodiesel, LPG, CNG, leading to multi-fuel engines, as well as hydrogen-fueled engines. Beyond that, Deutz continues to research synthetic fuels.

On the other path, Deutz started on the road to electrification with its 2017 acquisition of Torqeedo. Torqeedo, Hiller said, gave Deutz not only an electrification development center for the company but also experience. “The thing with Torqeedo was that they were not only talking about electrification, they had several thousand units in the field. They brought experience with electrification. The learning curve they had already gone through, we could use on our side.”

Then came the acquisition of Futavis GmbH, a development service provider for battery management hardware and software.

He added that the systems knowledge of Torqeedo in electric drives will now be complimented with Futavis’ with high-voltage battery technology.

This led to the developments of concept battery electric vehicle systems such as shown at ConExpo-Con/Agg and last year at bauma. Further down the line, Hiller said, Deutz continues to research the use of renewable electricity sources for its product range.

“We have spent around $100 million on developments and acquisitions in electrification,” Hiller said. “These are products and technologies we can use throughout our entire product portfolio, so it is a good investment for us.”

All of which means there are a lot of propulsion technology pieces for Deutz to juggle in the coming years.

“On the diesel side,” Hiller said, “the activities of Stage 5 are done. This gives us new capacity; it frees up engineering capacity. So, we are changing the focus in engineering more in the direction of electrification. We have hired a lot of new electrical engineers.”

Interestingly, on the engine side, Hiller sees these developments of different forms of propulsion, as also changing the internal combustion landscape.

“I think we also start to look more at cooperations for bio-methane and hydrogen engines. But also on the diesel side, our new sub-two-liter diesels were done in cooperation with Kukje, above nine liters it was done with Liebherr,” he said.

“Then if you look at fuel cells, fuel cells are not a core business for Deutz,” Hiller said. “To design and produce fuel cells requires skills and technologies far away from the technology we have today. But to buy fuels cells and to integrate them into our electrified systems, that is feasible.”

Finally, the timeline for production of electrified propulsion systems and all the other alternatives is literally the multi-million-dollar question. Here, Hiller had some surprising news.

“By the end of this year or early next year we will introduce our first completely electrified serial production products.” He said applications would include telehandlers, mini-excavators, and possibly aviation ground support equipment uses.

He said 2020 marks the beginning of marketable hybrid and fully electric products. In 2021, Hiller predicted the start of relevant revenue from these technologies, and by 2022 he estimated that 5 to 10% of Deutz revenue would be generated by electrified drive systems.