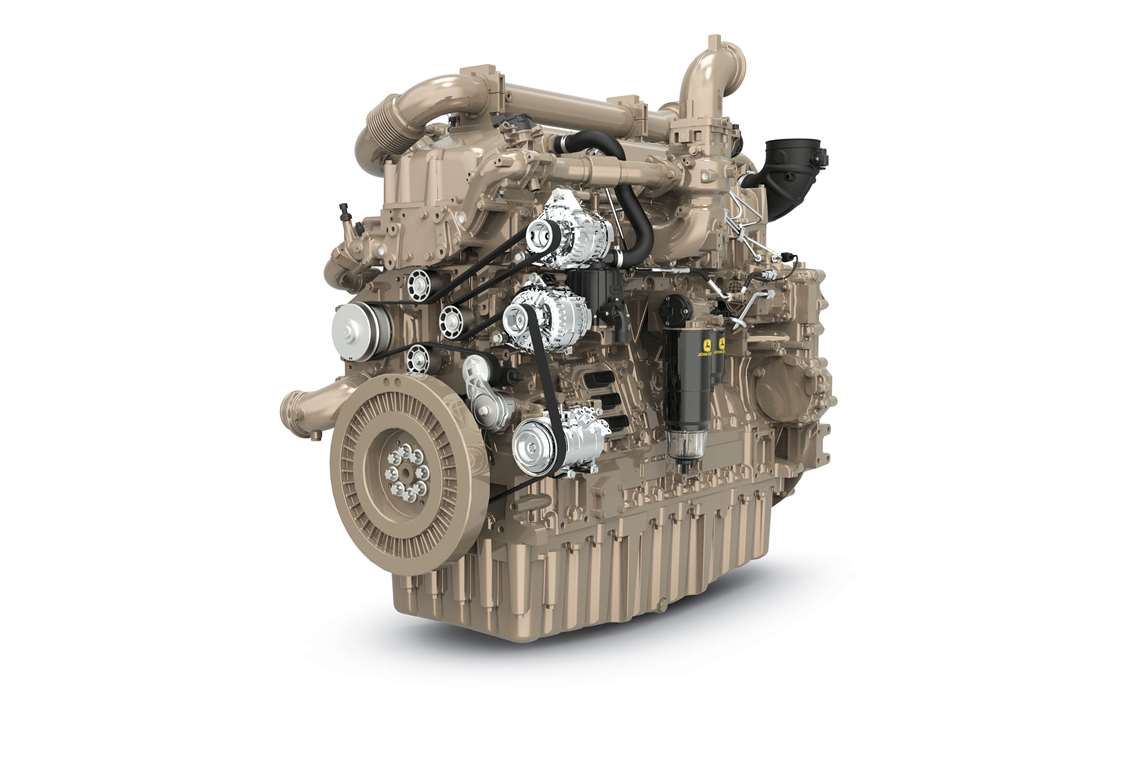 John Deere Power Systems (JDPS) has recently announced updates in both its engine and powertrain component portfolios. The updates include the introduction of a brand-new 18.0 L diesel engine, coming in 2022, additional hardware solutions for its new 13.6 L diesel engine, and the North American debut of the latest versions of its electric off-highway drivetrain components.

“We’re continually focused on providing our customers with power solutions that fit their applications’ needs. That’s why we’re growing our power range and optimizing our latest technologies,” said David Hoffman, director of worldwide marketing, sales and customer support at JDPS.

First introduced at ConExpo-Con/Agg 2017, the 13.6 L diesel engine will begin full production later this year. JDPS and its distributors are now accepting orders, the company said.

Designed with flexibility, serviceability and durability in mind, the 13.6 L engine is equipped with self-adjusting hydraulic lash adjusters and a high-pressure common-rail fuel system. Model-based controls will enable advanced prognostics capabilities, with fewer sensors and improved transient response. The auxiliary drive can take full power off the front of the crankshaft and features forward-facing SAE A, B, B-B and C drives and a rear-facing SAE C auxiliary drive.

As for aftertreatment, the 13.6 L will be equipped with an inline integrated emissions control system (IECS) from John Deere — a single canister with an integrated mixer and DEF injector.

For ease of serviceability, the most common service and repairs needed for previous John Deere engine models were also taken into consideration when designing the 13.6 L engine, according to Michael Lefebvre, manager, global marketing and product strategy at JDPS.

“Not only did we reduce how often such repairs would be required, but we also spent time understanding and improving the amount of time to make such repairs,” he said. “This is a heavy-duty engine for the heavy-duty marketplace and anything we can do to extend the life of the engine is important.”

“Combining the single turbo with the continuous duty cycle ratings is a nice feature. We anticipate that it is going to be well received in the market,” Cawelti said. “With constant power for the generator set market, we’re able to cross the 500 kW threshold in a prime power application.”

The new diesel has up to a 6% fluid economy advantage, while heat rejection reduction is over 20%. Further, Cawelti said the engine is 3 dB quieter, resulting in a 50% decrease in sound intensity.

The introduction of the new 18.0 L model in 2022 will move the top end of the JDPS power range to over 870 hp (650 kW). The engine, the largest ever from John Deere, will be built at the company’s Engine Works facility in Waterloo, Ia.

Lefebvre said the 13.6 L and 18.0 L engines were conceived together. “We started with the concept of having a couple of engines to cover our growing power needs into the future,” he said. “And out of that came the 13.6 L and now the 18.0 L.”

“We utilized a streamlined engine design process to expand our power range. Advanced modeling allowed us to define and optimize engine subsystems to achieve our performance requirements and to deliver on our customers’ growing horsepower needs,” said Hoffman.

Like the 13.6 L engine, the rear gear train on the 18.0 L is designed to reduce noise as well as torsional and crank stress. The overall design will also include a three-piece wiring harness with a protective channel.

The big news with the JDPS 4.5 L engine range will be expanding the non-EGR offerings in 2021, according to Ashlee Klingaman, manager, strategic product planning at JDPS.

The John Deere 4.5 L engines range from 74 to 173 hp (55 to 129 kW). This includes single and series turbocharged engines covering 85 to 173 hp (63 to 129 kW). The expanded options offer configurations with and without a DPF for both variable and constant speed markets.

JDPS also introduced the latest iteration of its OEM electric drivetrain components. “We have leveraged more than 1.5 million hours of electrification experience in construction equipment to deliver on the characteristics most important to our OEM customers: durability, scalability and flexibility,” said Darren Almond, strategic marketing lead, electrification at JDPS.

Almond said the JDPS portfolio is designed to be modular for ease of OEM integration, minimizing the need to re-engineer vehicle design to begin testing and implementing electrification solutions. “We’ve identified key electric drivetrain components that will integrate into existing space claims, further streamlining the transition to electrification for OEMs,” he said.

Introduced for the first time at ConExpo was an electrically- driven three-speed transmission to go alongside the previously announced single- speed electric gearbox.  Designed for ease of integration, JDPS said the gearboxes have options to connect with existing on-highway or industrial axles via standard driveshafts. The transmission options include inline single or dropbox dual driveshaft output, as well as single- or multi-speed options with parking brake and disconnect options.

Finally, with scalability seen as a critical feature, Almond said, power and torque scales with motor length and can range from 100 to 400 kW in a single gearbox. Further, designers can link together generation systems via the John Deere inverters to sum the total generation output. This allows an equipment designer options on how to achieve high levels of power with smaller engines that can scale with the application needs, he said.

Finally, products from John Deere Electronic Solutions (JDES) were a big part of the JDPS ConExpo-Con/Agg launches. Specifically designed for on- and off-road applications, JDES products now include a family of displays that allow for human-machine interface via tactile buttons or capacitive touchscreen technology.

In addition, JDES showcased its Smart Connector and MTG 4G LTE communication components. The Smart Connector is a compact two-way communication device that reads vehicle information over the CAN bus and transmits that data back to a mobile device via Bluetooth. The MTG 4G LTE continues to support advanced telematics by tracking machine health, job status, diagnostics and much more.

JDES also exhibited its established PD400 and PD280 power inverters used in the John Deere electric drivetrain solution mentioned earlier. Capable of operation at 350 to 700 VDC, these inverters provide a scalable architecture to support efficiency and performance in a system design, JDES said. The inverters can be used in conjunction with a variety of motor manufacturers for both traction and electric accessory applications.