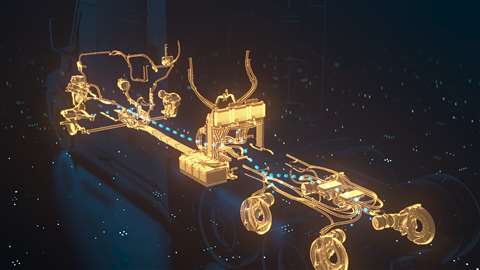 Daimler Truck said it is developing a scalable autonomous truck platform that is suited for SAE Level 4 autonomous driving, including redundancy systems needed to achieve safe and reliable operations. Daimler said the four key areas with a redundant architecture are the braking system, the steering system, the low voltage power net and the network communications. In case any of the primary systems encounter a fault, the Level 4 vehicle will be able to monitor, assess and deploy its backup systems to control the truck safely, the company said.

Daimler Truck’s L4 truck platform is based on Freightliner’s Cascadia and aims to set new industry standards. The redundant truck chassis is being developed for Waymo Via based on its specifications. A first version of the truck has been delivered this year for integration of the Waymo Driver autonomous driving system. If a fault is deemed critical to the operation of the vehicle, the autonomous driving system will allow the truck to follow a safety protocol and be able to execute a “minimal risk maneuver” to come to a safe stop. 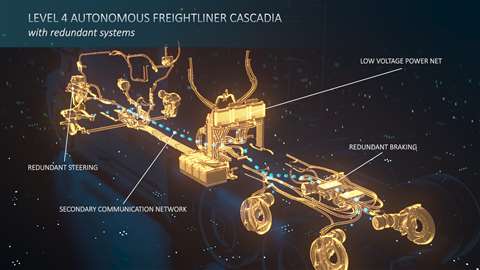 “Every smart autonomous driving system needs a strong foundation,” said Dr. Peter Vaughan Schmidt, head of Autonomous Technology Group at Daimler Truck. “Our Level 4 vehicle platform based on the Freightliner Cascadia is ideal for integration of autonomous software, hardware and compute. It can significantly contribute to enhancing safety in traffic thanks to its redundancy of systems and a multitude of sensors. It brings us much closer to our vision of accident-free driving.”

More than 1500 new and unique requirements have been identified by Waymo Via, Daimler Truck said. The engineering team at Daimler Trucks North America LLC (DTNA) is developing and implementing these requirements during the vehicle development process. For example, while today’s pneumatic braking systems have fail operational attributes, Daimler Truck’s Level 4 vehicles have an additional layer of electronic redundancy, using two electronic control units (ECU) – a primary and a secondary system. Together, they ensure full brake performance, to safely execute a minimal risk maneuver in case one system is not operating properly. 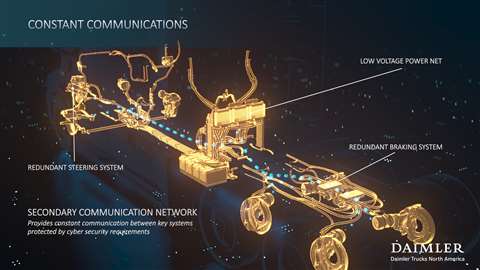 The same logic applies to the steering system that has been enhanced by having two servo motors. In case of an electronic or hydraulic failure, the backup servo motor also receives the requested steering angle from the autonomous driving system and can react accordingly.

Constant communication between these key systems is meant to ensure that there is no loss of critical information flow among the controllers. Daimler Truck has included a secondary communication network to key devices, which is also protected by cyber security requirements. As for the demanding power consumption by all the ECUs and sensors in an autonomous truck, a robust low voltage power net is required. Exclusively developed at DTNA, the power net system ensures constant energy flow to critical systems.

Best testing conditions in the U.S.

According to the U.S. Bureau of Transportation Statistics, the U.S. has seen the tonnage of goods shipped by trucks increase by 56% in the past decade. This number is expected to nearly double in the next two and a half decades. At the same time, the trucking industry faces a shortage of drivers. These developments contribute to a growing need for safe, reliable, cost-effective trucking solutions.

Based in Portland, the team of experienced engineers at DTNA is responsible for developing, building and releasing the Level 4 vehicle platform with redundant systems in close collaboration with their partners. DTNA already reached a critical milestone towards series production and delivered a first version of the redundant Freightliner Cascadia built for L4 readiness to Waymo for integration of the Waymo Driver. 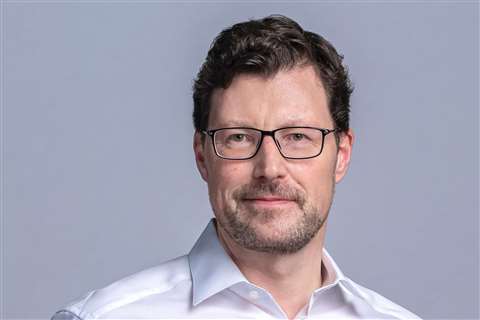 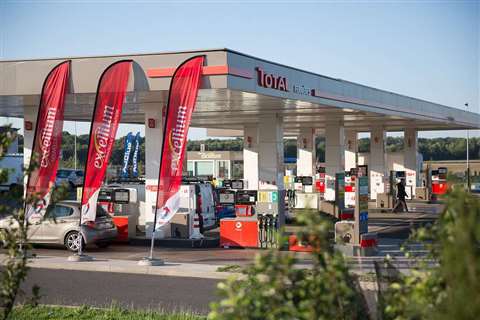